Home Thinking and Ideas 2016 05 Artist of the Month: Adam King

Artist of the Month: Adam King

This month we talk to Adam King about his minimal and brooding landscapes from the Norfolk area. 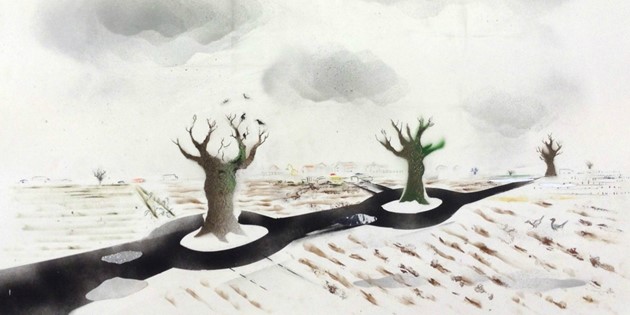 Tell us about your practice at the moment, how would you describe your work?

I’m interested in landscape and contemporary relationships between people and the pastoral. The current work makes reference to rural Norfolk including the way it’s being being developed and reconfigured through large scale house building. My response is mostly collage-based drawing and I’ve just started making a series of linocuts. The aesthetic is still pared-down and includes the design sensibility of the earlier drawings but the treatment is less naturalistic including the use of colour that’s more vibrant and invests the imagery with a visceral quality.

Now I’m actually living in the countryside again - rather than a regular visitor from the city - it’s changing my approach. I’m more immersed in some ways although I’m still interested and aware of a distance between people and the landscape they inhabit. These new build estates market country living as an ideal yet many people who live in the country experience it primarily through a car windscreen or the window of a house. 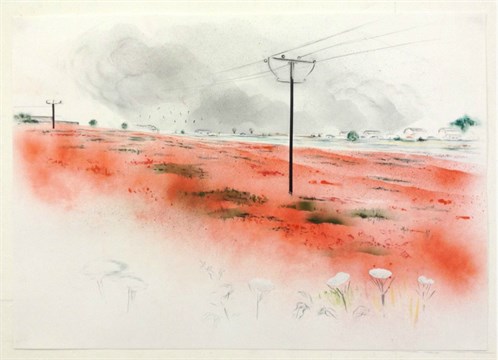 Tell us a bit more about how you construct the images, being made from materials like spraypaint and glitter they are qute different from traditional landscapes.

Yes, some of the materials I’ve used including spray paint have more of a relationship to and context with city environments. They carry traces of an urban sensibility. It’s partly about my desire to connect to the rural landscape from central London. I’ve also used non-traditional media to allude to the idea of encroachment and re-configuration. I’ve taken a subject traditionally represented in a medium such as watercolour and used other materials to suggest urban influence and changing identity.

The use of stencils makes reference to design - the idea of the landscape being re-planned, developed and re-contoured. In some works I’ve used stencil and spray paint to compose a naturalistic treatment including some of the cloud forms where I’ve applied spray paint through a stencil that’s held a little way back from the paper ground and create diffused contours. With other forms such as the roads the stencils are fixed with tape to the paper to give a graphic, sharper-edged quality.

My practise often draws on a collage sensibility. The works are cosmologies of marks, forms and materials that make reference and allude to history, the contemporary moment, culture, nature etc. The materials are composed into fractured surfaces that also communicate a sense of flux. 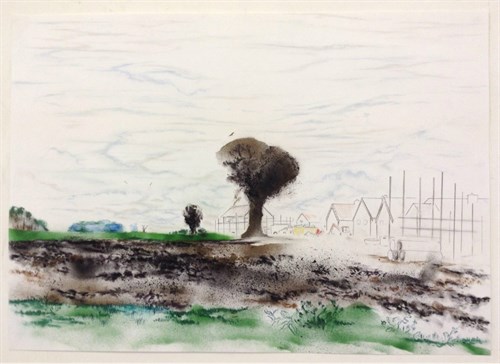 The works are quite restrained, in term of the amount of information you put on the image, but there is quite a brooding drama or foreboding in them; a house fire, a speeding car in the distance or an approaching storm for instance. Tell us a bit more about this mood and how it is generated in you work.

Yes, in the past the images were really saturated with all kinds of materials and imagery. Then a year or two ago I started to leave more space around individual forms and elements as a way to point to particular imagery and give the marks room to breathe. In some ways it’s the result of a different kind of process. Rather than working within the same image, changing, deleting and adding I started to compose the ‘layers’ as pared-down images then move onto the next image on another sheet.

The sense of brooding drama in the work is inspired by the cinematic quality of the Norfolk landscape. It’s an elemental, panoramic place with dramatic moments of weather and atmosphere. Lots of living things going on! There’s also a real sense of mystery, of a private world - events going on behind closed doors or in remote woods or farmland. I’m interested in art historical paintings where you get compositions - often in narrative paintings - organised into vistas and you can see something happening in the distance or in a particular area. This structure is also why I’m influenced by cinema and literature - they show and communicate something unfolding. In some of my past work the images were often quite didactic. There was an agenda that told the viewer what to think. Creating a sense of mood allows me to communicate content through less obvious means. It doesn’t tie the work down to one particular reading. 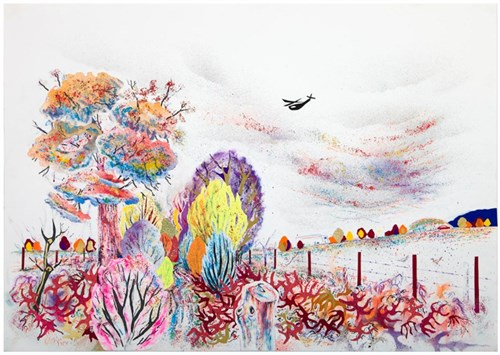 What is it about landscapes which you are drawn to, as I notice some of your older work was based more in installation and sculpture?

Well I grew up in the Norfolk landscape through my formative years and have always loved nature! It’s something I value and have a strong bond with. Much of my past work draws on nature and landscape but through different form. In the installations I’m really just creating an actual landscape - rather than representing one through the illusion of space as with the works on paper. The form I use moves back and forth as my ideas and responses to content change. One of the things I’m becoming aware of with linocut prints is their sculptural qualities and I’m beginning to see the potential for new installation work. 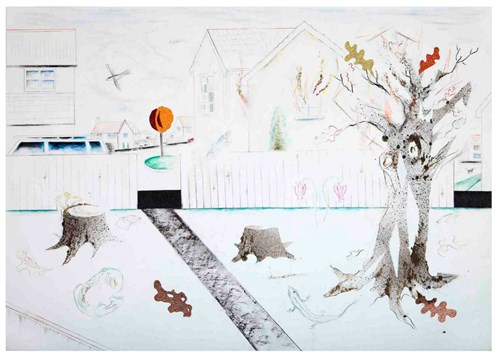 You mention abstraction in your statement, how does this feed into you work?

I think it is Pastoralism represented through a new language, developed for the 20th century. One of my references is Early British modernism including the abstraction of the 1930’s and 40’s. I look at artists like Eric Ravilious and the war landscapes of Paul Nash where you get these fragmented landscapes composed of geometric and abstracted forms - nature recast through the mechanisation of war machines and the new technologies. I use abstraction as means to reconfigure and transform identity.

Nothing at the moment. I’ve recently completed two shows - one a solo so I feel I want to concentrate on making work again for a while. As well as the prints I’m making a narrative animation based around the Devil’s Ditch - a mid-saxon parish boundary marker in Garboldisham, Norfolk with colourful mythic references. Lots to do!

Keep up to date with Adam's Blog here>