Home Thinking and Ideas 2016 02 Artist of the Month: Emily Hesse

Artist of the Month: Emily Hesse

Out artist if the month for February is Emily Hesse. We talk to her about what it is to be local, and her project New Linthorpe. 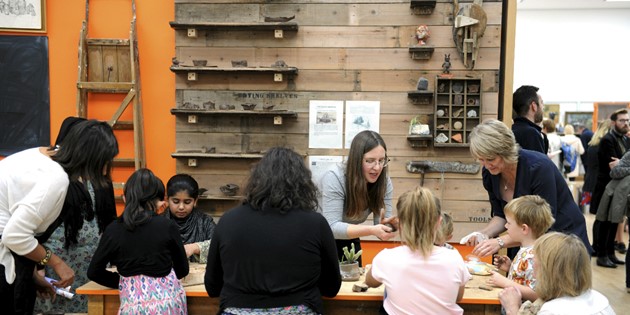 Tell us about you practice, how would you describe your work?

My twins wake me at 6:30 am, I usually step on Lego walking downstairs but the need for tea outweighs the pain. As I pack lunches, the kids moan about going to school, I tell them the story of my Father who at 13 worked before and after school everyday to better himself. He isn’t with us any more so they don’t answer back. I get trains as I can’t drive. I pass a Philip Webb Arts and Crafts house once occupied by Gertrude Bell, bricks pulled from our earth, the now silent Redcar Blast Furnace: this is Ridley Scott’s Bladerunner landscape, this is my families home. There is immense beauty here.

My work is these stories, the application of my whole self, it is not separated from my everyday life and therefore deeply rooted in my locality. I choose to represent these unknown or often under-represented stories, social histories or futures in whatever form makes the invisible visible. 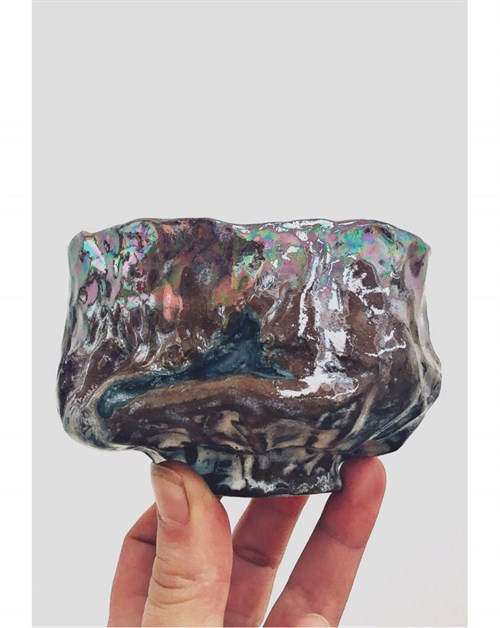 Your sculptural work seems to use a lot of natural and weathered materials like clay, driftwood, rope and stone. What attracts you to these particularly?

I was thinking about this question recently - As a child we always had paint in our house as my Mum painted, but never a surface to paint on to. So if I wanted to paint I went outside and looked for a surface. This was often an old bit of wood, a stone or some sort of material that was free for me to claim. I suppose that because I didn’t attend art school I haven’t had my sense of naivety ‘critted’ out of me (for want of a better word). I’m a bit of an outsider and so are the stones, the wood, the clay etc. They have always been with me, they are as much this locality as I am, they have their stories, they are archetypal.

The clay that I have been working with for the past two years is dug in Middlesbrough. It’s a brick clay, only there are no longer any brickworks on Teesside. I’m not sure who decided it was a brick clay, I suppose it was decided as this town sprung up during the industrial revolution and this was the first material they could get their hands on. You knew it was there because someone remembered their childhood on a farm making mud pies from it. As you walk around the town today, the original buildings have been built literally from this ground up. 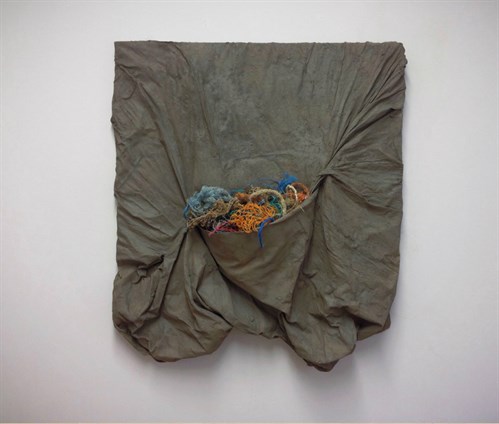 You are based in Saltburn-by-the-Sea, how is the art scene there?

A few years back Saltburn was selling itself on being the St. Ives of the North in response to the number of artists residing here. I’m not sure where that came from as there are quite a few artists living in Saltburn but the art scene is pretty much non-existent. In 2013 I set up Class 1, a project space/gallery in a former school classroom here in town as an end of residency project I had done with a local charity. It was an inclusive space; openings would often attract visitors in the hundreds, mainly from the local community. Unfortunately we were evicted so the land could be sold for development. A road now runs through it.

Living here is actually a conscious choice to not be part of an art scene. I regularly make trips down to London but I’m not sure living there would allow me the freedom to have such a loosely defined practice. Here I can be a theorist, a potter, an activist, a sculptor, a community artist or a facilitator as I have (over quite a few years now) managed to gain that level of trust within the space that I occupy. I’m not sure this would be possible in an area with a more formal or structured artistic scene. 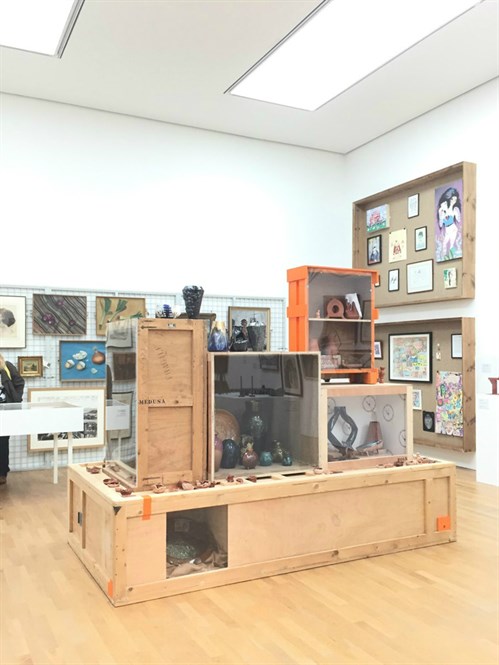 Installation at Common Ground Part 1: From Linthorpe to New Linthorpe, 2016

Describe your studio, or where you work. Do you spend a lot of time there?

At present my studio is a public space in a gallery within the work Common Ground – No Two Alike, which is in the exhibition Localism at Middlesbrough Institute of Modern Art or my garage. I also work at my kitchen table, garden and in various café’s. A large part of my practice is social, and this means being a representative of the community you work with and for. This isn’t possible behind the closed doors of a traditional studio. I also don’t regularly make work for exhibitions, as a lot of what I do is project based although I still consider these projects my work.

Tell us more about New Linthorpe, how did that start?

In early 2014 myself and curator James Beighton decided we would like to work with our local social history museum, The Dorman Museum in Middlesbrough. We had both always loved it and were particularly interested in the world’s largest collection of Linthorpe Pottery, which the museum has. The pottery was started in 1879 by John Harrison on the site of his Sun brickworks in Linthorpe, Middlesbrough to provide employment during the Iron depression, which had left many in the town out of work. Harrison managed to enlist the services of designer, Christopher Dresser, to develop a range of ceramic wares. Art Pottery, made using the local brick clay.

We wanted to see what form a social enterprise such as a pottery could take today. What could the use of a material such as local clay do? Could it offer the opportunity to teach traditional ceramic skills? Could it reconnect a community with their local identity? Could it just be a reason to sit around a table and discuss the future of our town? It was a point of action. So we started without having an outcome in mind. I undertook an MA in Ceramics at the University of Sunderland in order to equip myself with relevant skills not only to make but to pass on. The clay is dug and processed by us, so it required a little more than basic knowledge. We now have a range of limited edition ceramics that are made in the Linthorpe clay and sold to fund the project. Last summer we were commissioned by mima to develop the project further within their Localism exhibition. Two works were created, Common Ground – From Linthorpe to New Linthorpe and No Two Alike. They appear, when placed in the gallery, as contemporary art, one as a display and one as a workshop, but they are an ecosystem. One feeds and supports the other through ideas, discussion, and making, which is carried out with members of the local community and gallery goers. We also set up an Honesty Table in the gallery shop were works made in the workshop (by anyone) can be sold.

We have used operating inside the gallery as a sort of public consultation process if you like. Rather than deciding how art should be used to benefit a community, we ask the community what art can do for them. 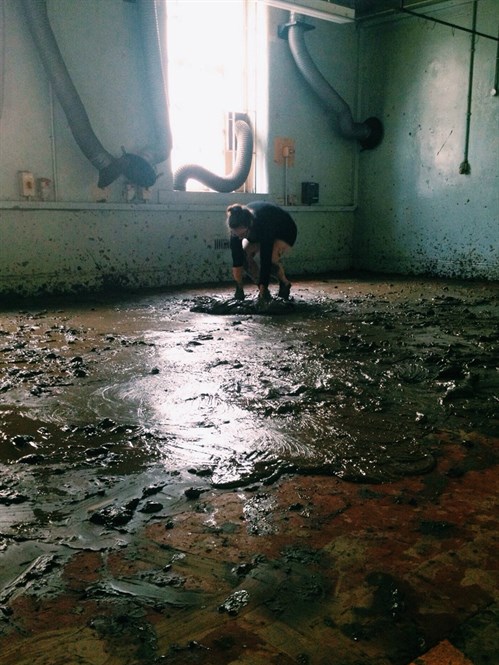 It’s a difficult time to be an artist working at the moment (although this has been said by artists for generations). The constant bombardment of visual material, the structure of the market, the hierarchies and systems artists are expected to operate in, the amount of work out there that just doesn’t feel honest. It’s messy and has created for me a constant battle with the idea of art providing an aesthetic experience, because I don’t often have one when viewing work. So I have become more interested in knowing what an artist’s truth is, rather than how ‘good’ or ‘bad’ their work may be.

In 2012 I assisted Jannis Kounellis for two weeks and he definitely had an impact on me. The best part of this was that as I put together one of his works, he ended up using the local materials I work with to create a work of his own. He taught me to view the gallery space as a studio rather than a showcase and that I must ‘keep stabbing the knife in until someone listens to me,’ his words not mine and not literally of course, but I greatly admired his ability to remain true to himself at all times. I was lucky enough to hear Theaster Gates speak last year at a conference. He is someone I have always admired for his ability to work for a given community whilst remaining true to himself as an artist, Rick Lowe being another person deserving a mention for that ability…anyone that sticks their neck out a bit really.

I’m going into 2016 without a single exhibition in the diary. It’s liberating. However saying that, it looks like I will probably have more work than ever this year. We are looking to establish a more permanent home for New Linthorpe and I’m looking at ways to actively work with other artists based here in the North East. Talking is beginning, but it’s all about the action.