Home Thinking and Ideas 2016 01 Artist of the Month: Eldi Dundee

Artist of the Month: Eldi Dundee

Our first Artist of the Month in 2016 is Eldi Dundee, whose practice covers performance, sculpture and installation 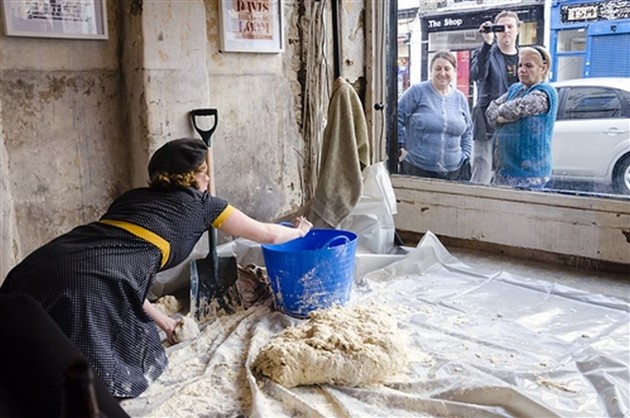 'Untitled (A Floury Performance)' for 'What Audience' show at The Old Dentist, Clapton, 2013. Photo: Anna Kroeger

Tell us about your practice, how would you describe your work?

This is always a hard question for me to answer. I find it difficult to define my work, because I’m so scared of being confined by whatever it is I say about it. I work across different media – painting, sculpture, printmaking, textiles, installation, assemblage, text, performance, video and photography, I need that variety. A single approach doesn’t really suit me and my interests. 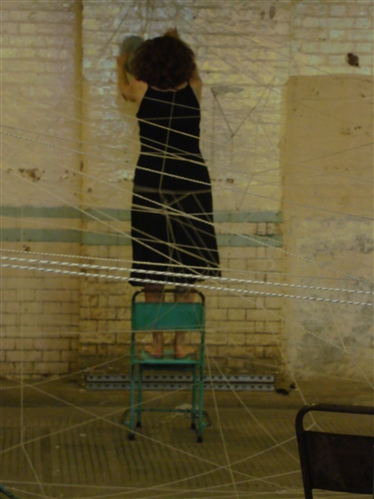 The themes tend to be obliquely autobiographical in some way, but the autobiographical element isn’t always apparent to the viewer, and as far as I’m concerned, it doesn’t have to be, it’s just the springboard for me to jump off from.

My work tends to have a physicality about it, some sort of a struggle - either in the subject matter, in its making or in the presentation. I want to see the struggles, the choices, the deletions, the changes of mind.

In my performance work I’ve tended to perform silently. When directing other performers in my own pieces though, I’m learning to let go a bit more and allow the unexpected to happen. What comes through is always more interesting than I could have possibly imagined or intended - there is a tension and disparity between what is and what I thought was going to be, that I find surprising and inspiring, and leads things into a completely new direction. This process for me is often much more interesting than any finished piece, whether painting, object or performance.

Tell us a bit about your background, I understand you were based in NY and trained as a dancer first? How do these things affect the work you are making today? What made you shift into object based art making?

“I am not a Dancer…” (links to work by same title at eldidundee.co.uk)

I do have some dance and movement training, but not to professional level by any means. Dance has only come back into my life by way of work-shopping some of my ideas with some dancer friends, and this fed into reconnecting with my own body’s desire to dance, so I started attending 5Rhythms classes again after a break of 10-15 years. 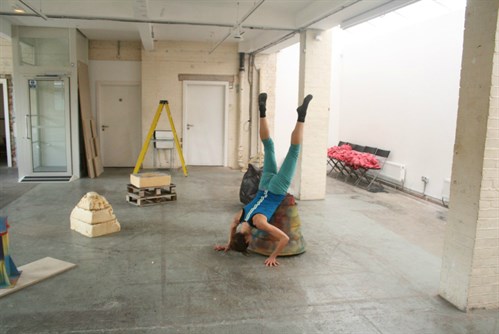 I have always worked in two and three dimensional art forms, long before bringing performance into my practice. Until fairly recently I kept acting and art-making completely separate, but a couple of things happened that brought performance more to the fore of my practice.

The first thing was that I developed an all-body joint condition and was incapacitated for some time, walking with a stick etc, which was scary as I was too young to be feeling like that. Thankfully I got treatment and was in remission from symptoms for a while, or at least managing them better. The body conditioning and warm-up exercises I’d learned in my acting training helped to gradually get my hypermobile joints from flaring up, seizing or dislocating. Painting and object making became harder, because I could no longer stay in one position for long periods of time, and working with heavy materials was out because I didn’t have the strength to shunt them around. Working smaller and lighter and having a more mobile practice became quite crucial.

The second factor was tutors at Byam Shaw and at UEL pointing out the performativity already in my work, even in my painting and printmaking. There was a physicality in the making and a theatricality in its presentation, but I was too close to the work and didn’t see it. I needed to get over my mental block about ‘performance art’ as well before I could open up to the possibilities that were awaiting me. I’m a late bloomer, I guess. Currently, I’m even moving away from a materials-based practice (but I reserve the right to return to it when space and finances allow!) and am focusing more on performance, text, video and the internet.

Tell us a bit more about this relationship between objects and performance, which seems to be a reoccurring subject in your work (I am thinking about the series of performance plinths here)

I still don’t completely know myself whether those objects I made are operating as some kind of stage props or what. They were never intended to be that. The materials I first envisioned making them in were marble and solid wood, but because I didn’t have the facilities or the funds to work in those materials, I began testing out the forms by working with cheap, recycled and lightweight materials. 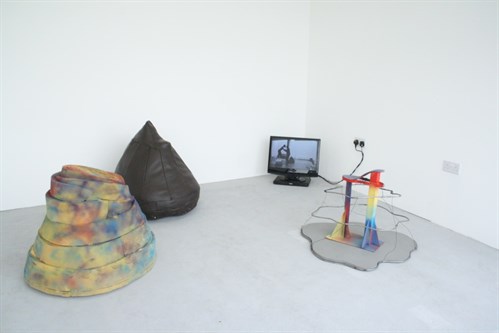 I wanted them to be indoor/outdoor sculptures that grew out of the landscape or gallery floor and could be clambered upon by children and adults alike, allowing people the permission to stand on a piece of art, and to give them the feeling of being ‘King of the Mountain’ or to play 'Moving Statues', becoming the artwork themselves.

There is only room for one foot on these performance plinths or pedestals I’ve made, so it’s very easy to fall off if you lose your balance. Then there’s the slant to the foothold, shaped like a high heel shoe, but with no toe-hold or straps, which makes it doubly challenging to stay up without slipping off. Ultra-fit dancers find it a lot easier to master them, and even when they fall, they fall gracefully and with style!

So you are currently studying an MA in London, how are you finding it?

I’m finding it really expensive! I’ve already had to defer starting by a year, and almost had to defer my second year because it looked as if I wasn’t going to have the funding in place to re-enrol. I feel like I’m constantly on a knife-edge financially, especially as a single parent. It’s really tough.

I won’t go too deeply into my financial woes, but I will say that having the Vice Chancellor’s Scholarship I was awarded withdrawn when I made it clear that I would need to study part-time because of childcare commitments really hit me in the pocketbook, as did the fact that I wasn’t permitted to complete a commission for a couple of small bronze figures using the College’s foundry. The VC Award would have paid half my fees, which would have amounted to one year part-time, and the commission would have paid the other half, which would have meant I’d be a lot more settled now, less stressed, and more able to concentrate on the course.

I’ve got a real bee in my bonnet about wanting to complete this course and get that piece of paper once and for all. I want to be able to have the degree show with my peers and attend my own graduation party… I want to celebrate the shizzle out of it! But we’ll see if that’s to happen this year, or next. I guess it’s not the end of the world if I need to take a break and join the current first years when they become second years. They’re a marvellous bunch of artists and people, so I’d be in great company.

Who working at the moment do you admire?

So many! A truncated version, and in no particular order: Marvin Gaye Chetwynd, Cornelia Parker, Phyllida Barlow, Grayson Perry, Marlene Dumas, and the dancing legacy of Pina Bausch via the continuing work of her company the Tanztheater. I’m deeply inspired by physical theatre and immersive theatre too, but as most of this type of work is shown at night and I have a child, I don’t get to see as many contemporary pieces as I would like.

I could go on, and bring in actors, directors, writers and music-people I admire too, but I’ll spare your readers that! 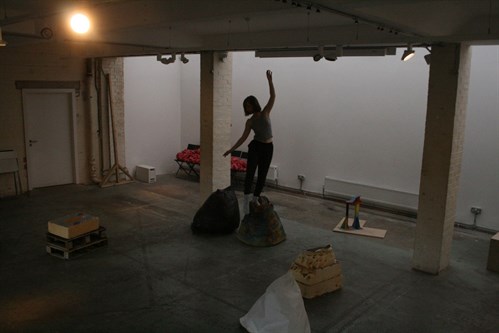 On January 21st, the private view of our ' we ≠ us ' MA Fine Art INTERIM SHOW at Chelsea in the Triangle Space, 6pm. Then first week in May, AltMFA is going to have a ‘degree show’ at Shonibare Studios along with other London-based radical, alternative fine art MA schools or collectives: Open School East and School of the Damned who will also have a week to show their work, and then the month will culminate in some kind of event with all three schools. 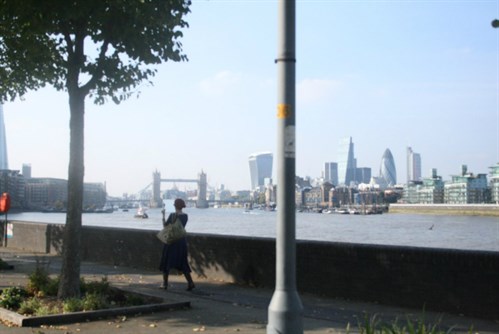 In the meantime, I also have two bronze commissions that need to be fulfilled by April as part of the BP Centenary Collection, so I can afford my mainstream 'institutional art school’ fees. And of course the Chelsea degree show in September to work towards. But as I may need to defer (not sure to be paid in time for this coming term) it may need to be postponed: same time, next year. We’ll see. We humans make our carefully thought out plans, and the gods rub their hands together while laughing maniacally. Because they've got something even better lined up for us, one hopes!