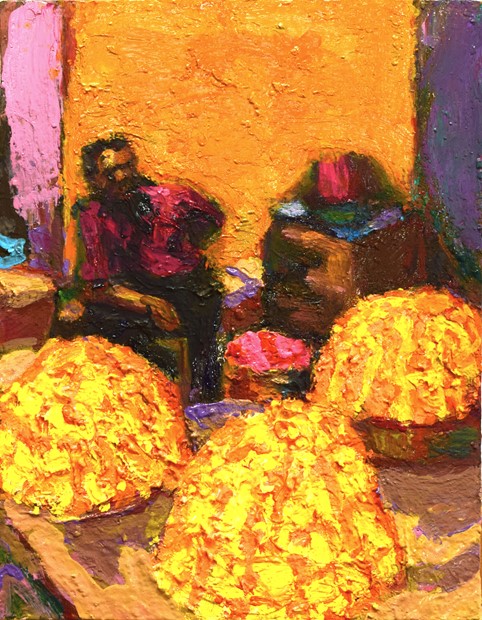 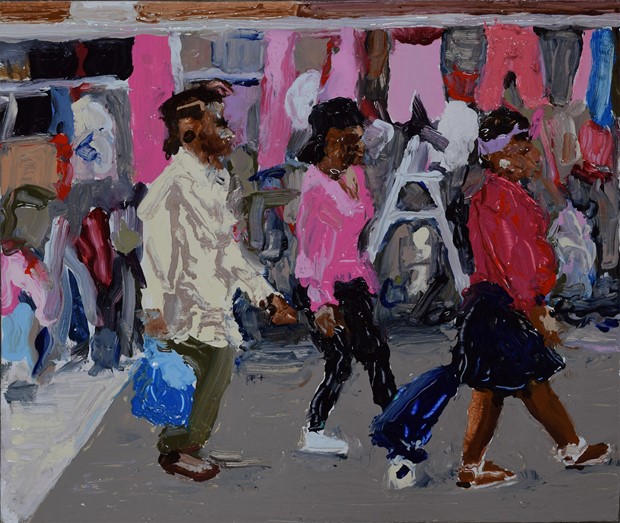 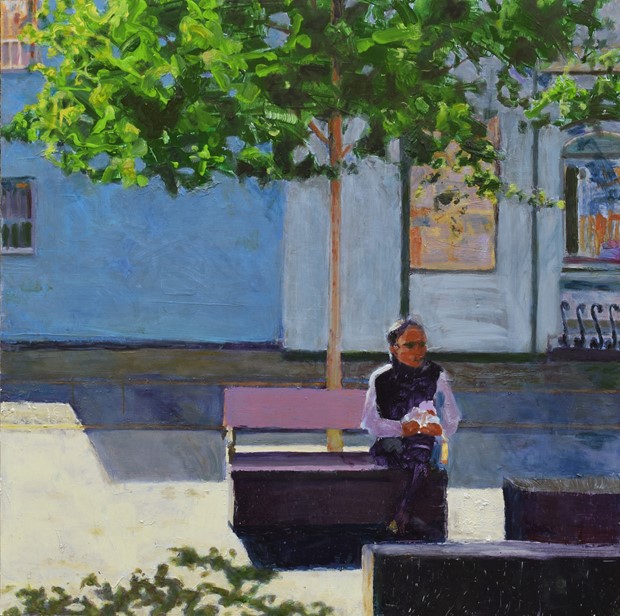 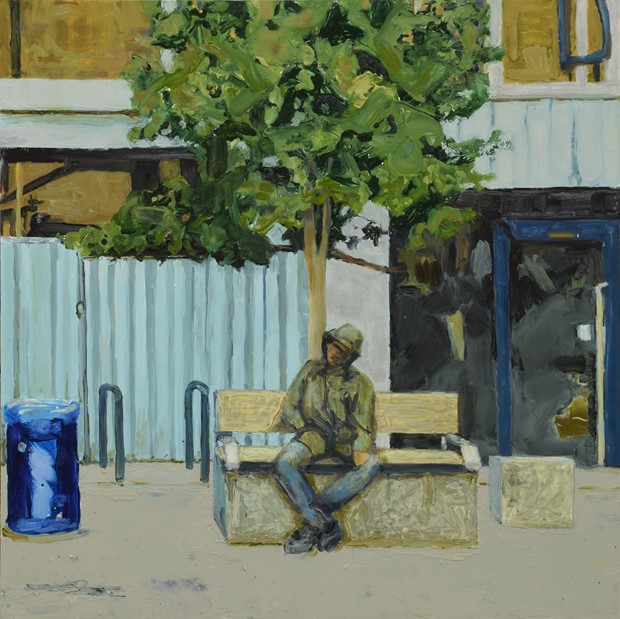 Painting, which is profoundly and ultimately about seeing, can make things visible.

I make paintings inspired by people's everyday lives in the urban space of cities.

The paintings arise out of my own visual experience.

They have an international dimension of travel and migration.

I am interested in the social use of public spaces. I think of the street as a place where people display themselves, engaged in what Jonathan Raban in his book Soft City called “the hazardous but necessary urban art of self-projection”.

The paintings could be said to bring an intimist sensibility to the depiction of public space.

I am not seeking to discover or expose elements of life that are extra-ordinary or remarkable. On the contrary I want to reveal the beauty of what is ordinary and everyday, to oppose a tendency of images in all media to sensationalise or glamorize.

I try to respect the people in the paintings and imaginatively inhabit their lives.

In the present political climate, the paintings are each an act of resistance.

I generally use my own snapshot photos as source for paintings and reflect on these in the studio to find which ones have paintings in them.

In all painting, there is a gap somewhere between what is depicted and how it’s depicted. I am fascinated by this gap.

I usually paint on the floor or on a table for small paintings, horizontally, with a liquid paint.

There is no preliminary drawing. The photograph does the drawing for me and leaves me free to let the paint do the work.

When I paint I try to respond to what happens in the painting, as much as I try to control the paint.

I often make paintings in series, devoted to a theme or place or subject, which re-enforce each other and add up to more than the individual images, when shown together as a group.

Making a series gives me a run at it rather than thinking that there’s one painting that has to have it all in it. It’s a real stimulus when I have a show ahead of me, to think I can make a whole set of work that will all somehow speak and come together and work together.

Inverse paintings. As a response to  Brexit, I began making paintings in inverse colours. It began as a rejection of political lies by exposing what it looks like to assert that something is the opposite of what it is. The implications of inverse colour go far beyond the specific political situation in Britain today. It is a new path I am only just beginning to explore.

Stacks and Wrap-ups A series of large-scale paintings of objects and assemblages encountered behind the scenes and after hours in markets. These objects recall sculptural conventions of wrapped objects, arte povera, installation art, minimalism and the found object. The paintings seek to retain the poetic potency of these aesthetic manifestations whilst returning them to their sources in ordinary life.

The Market Paintings are an ongoing series of paintings of markets around the world, drawing on experience of travelling in Latin America, Europe and India.

In Deptford. Since moving to Deptford, South East London, in 2007, I have made paintings of the local area. A selection of these pictures were brought together in an exhibition "In Deptford" at Deptford Does Art on Deptford High Street in 2018.

A Place to Live is a series of over 60 paintings of homes in London, inspired by Estate Agent property adverts.

Granary Square. In 2015 I undertook a private commission for for a triptych painting of Granary Square, the main public space at the new King's Cross development in London, which generated a series of studies and related drawings and paintings.

Urban people Since arriving in London at the turn of the century I have been making paintings of my immediate surroundings – streets, markets and public places. I set out in these pictures to paint people going about their ordinary lives in the city.

Wholesale Fruit and Vegetables. "Wholesale" was a site-specific exhibition which I took part in in Norwich in 1996 in a disused warehouse which had previously been occupied by a fruit and vegetable wholesalers. I filled what had been the cold-store with a series of 18 panels depicting fruit and vegetables

I also curate exhibitions. My interest is as an artist-curator, exploring the practice of painters whose work shares concerns with my own.

In The Heart of the Place is a collaboration with artist Madi Acharya-Baskerville, through which we explore our mutual interest in making images that are imbued with lived experience of places in the world, to be shown at the Crypt Gallery, Norwich School in June/July 2020.

This instead of That, co-curated with artist Alexandra Baraitser at ArtHouse1, London in 2019, explored how artists respond to each others' work.

Inner and Outer Worlds was co-curated with artist Marguerite Horner at Bermondsey Project Space, London in 2018.

IN THE CITY began at Lion and Lamb Gallery London, in 2014 as an exhibition of painters whose work reflects aspects of the contemporary city on four continents, and toured to East Gallery, Norwich University of the Arts and University of Greenwich Galleries in 2018.

2020 - In the Heart of The Place, (with Madi Acharya-Baskerville), Crypt Gallery, Norwich School

2014 - Life in the City, Freespace and New Space Galleries, London

2019 - This Instead of That (co-curated with Alexandra Baraitser),  ArtHouse1, London

2018 - This Instead of That (curated by Alexandra Baraitser), Lewisham Art House, London