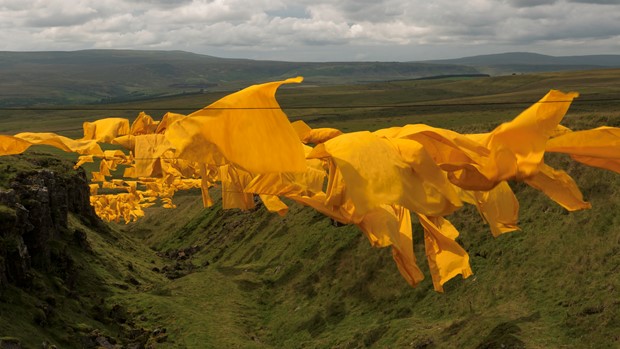 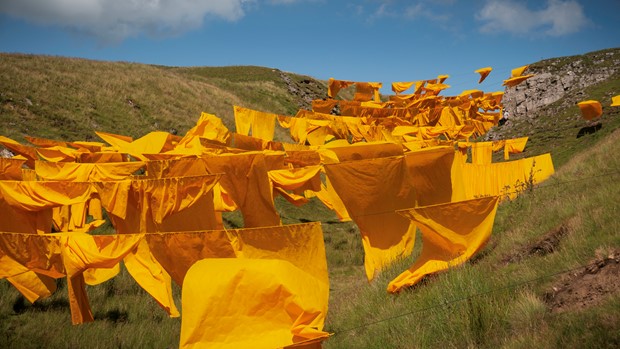 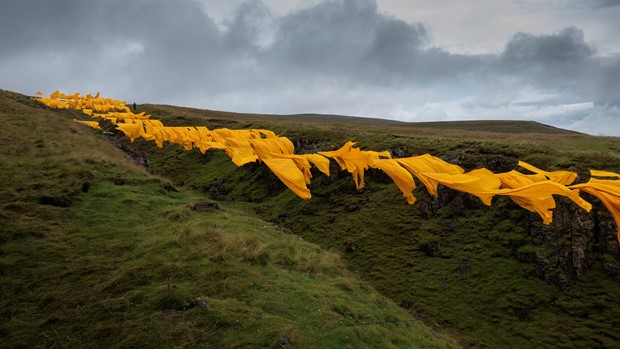 Hush is a temporary art installation in the remote landscape of the North Pennines Area of Outstanding Natural Beauty, County Durham, UK. Over 600 large saffron-yellow flags fill a man-made scar in the landscape bringing colour, sound and movement to transform this former industrial feature.
Leading environmental artist, Steve Messam conceived this artwork in response to the unique geology and landscape of the North Pennines.
At 370m long, 50m wide and 45m at its highest point, Hush would dwarf the vast Turbine Hall at Tate Modern and is the length of almost four football pitches. Over 5km of fabric were used to make the artwork.
The dynamic artwork draws attention to the form of the hush, one of the North Pennines most distinctive but overlooked features. Hushing is an ancient method of mining used in this area during the eighteen century to extract minerals from the landscape. Reservoirs would be created behind a dam high in the landscape before a torrent of water was released down the hillside moving the soil and exposing the minerals underneath.
Bales Hush is a SSSI so environmental sensitivity was one of the prime objectives of the piece at this scale. The exhibition period sits between the end of the nesting season for the endangered ground nesting birds common on these fells, and the beginning of the grouse shooting season that sustains the management of so much of the pennine uplands. All the materials were recycled back into raw materials afterwards. All the fixings used were designed to leave no lasting impression on the landscape and are reusable for future projects.
‘Hush’ was commissioned by the North Pennines AONB Partnership with support from the National Lottery Heritage Fund and Arts Council England.