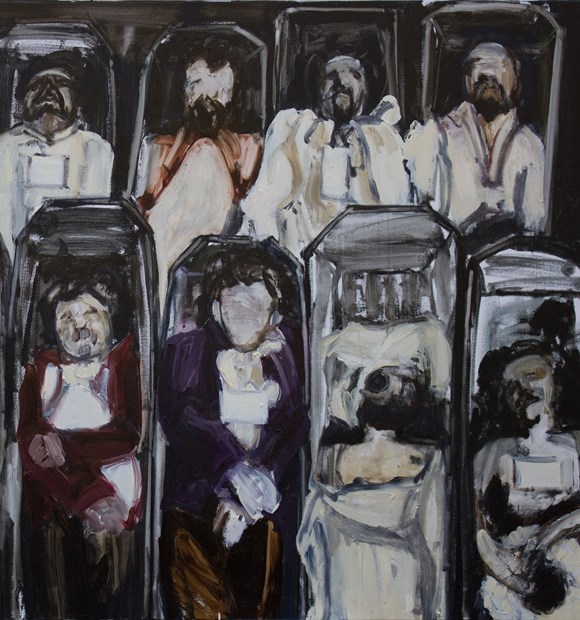 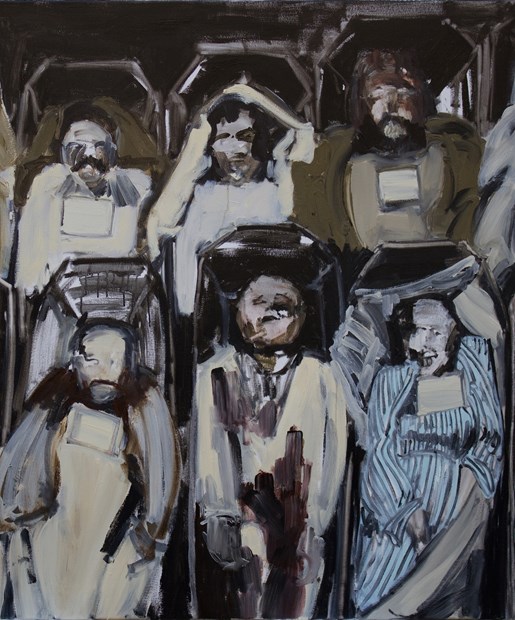 (Painting selected for The Open West 2015)

A coffin is a very rudimentary structure for housing a person and the last space we occupy. It is this space which I found intriguing in photographs of the dead Communards, whilst researching the Paris Commune of 1871. These became the subject of the painting Les Non-Réclamés (Diptych). History and in particular the Nineteenth Century, provides incredibly rich images and narratives for paintings I find.

The Paris Commune, made up of the National Guard, poorly paid workers, the lower Bourgeoisie, and many artists and writers of Paris, defied the Government and took over the city for several months in 1871. They tried to establish Paris as Commune, separate from the rest of France. Wild hopes of freedom and a better life, inspired by recently circulating socialist ideologies, were crushed when Government soldiers eventually managed to gain access to the city and the events of 'Bloody Week' were played out. The Communards, who were easily overpowered, died on the barricades, were shot on sight, managed to run away or were imprisoned.

An anonymous photograph entitled, 'Unclaimed Insurgents,' shows dead Communards from the Paris Commune of 1871, lined up in their coffins as if for some kind of morbid school photograph. Another photograph, strikingly similar, entitled, 'Insurgents killed during Bloody Week,' is attributed to Adolphe-Eugène Disdéri. Placing coffins in the vertical position seems unnatural, running counter to their ultimate purpose. The dead appear like unseeing sentries in their boxes.

Les Non-Réclamés (Diptych) has a composition based on a fusion of the two photographs. Initially, their strong, structured composition just cried out to be painted. After that, the painting tries to tease out some meaning or story, yet fluctuates between certainty and uncertainty, the detail and the emptiness. So much is there and yet so much is missing. Photographers were apparently hired by the Commune, and after its defeat hired by the Government, to record the dead and the prisoners for identification purposes. Yet, the debate surrounding these photographs, their authorship, purpose and the identities of their subjects, still continues. There is a number laid on each man's chest, yet two men have the same number. The intrigue and the ever shifting speculations are what make the subject so paint-able.