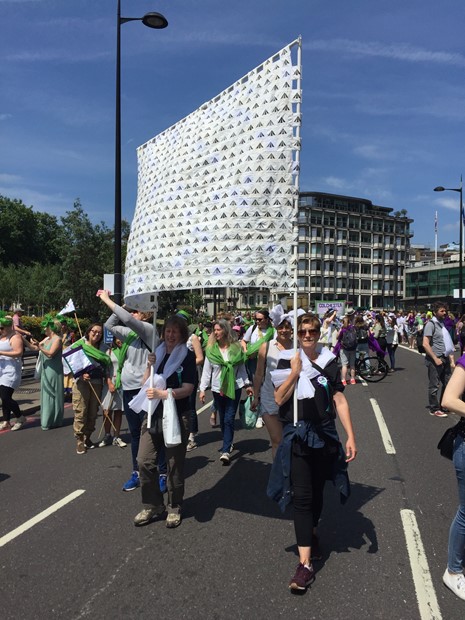 Patchwork banner with hand printed prison arrows, made 2018 for the celebration of 100 years when some women were allowed to vote in the UK for the first time. It is still an offence in the United Kingdom to reproduce the broad arrow without authority (in the same way as it is an offence to reproduce hallmarks). Section 4 of the Public Stores Act 1875 makes it illegal to use the "broad arrow" on any goods without permission.

4 Marks in schedule appropriated for public stores.
The marks described in the First Schedule to this Act may be applied in or on stores in order to denote Her Majesty’s property in stores so marked; and it shall be lawful for any public department, and the contractors, officers, and workmen of such department, to apply those marks, or any of them, in or on any such stores; and if any person without lawful authority (proof of which authority shall lie on the party accused) applies any of those marks in or on any such stores he shall be guilty of a misdemeanor, and shall on conviction thereof be liable to be imprisoned for any term not exceeding two years.