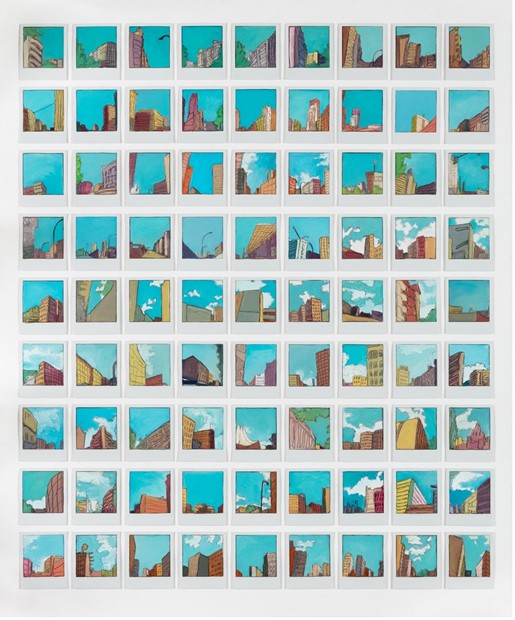 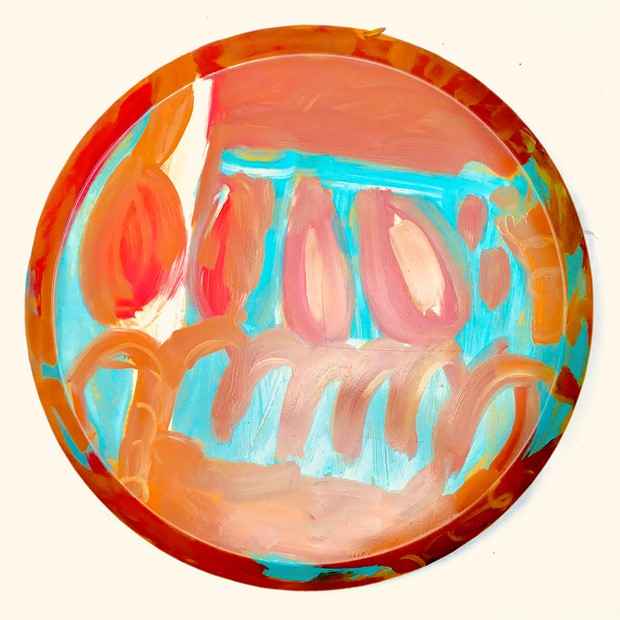 "Flag for the wind and the rain, our warm bodies and loving words", 2021 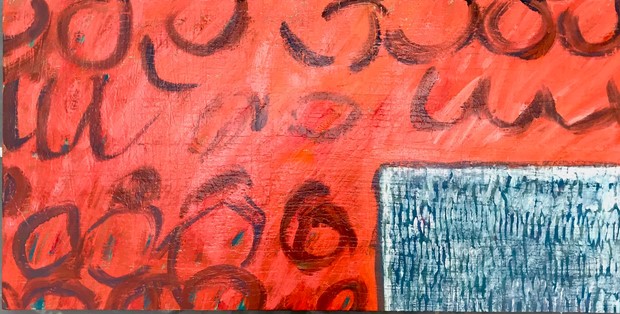 Kudirka’s work concerns the shapes and edges of stuff all around us from cities, buildings, and furniture to objects. Her work is distinctively low-tech – characterised by obliterated, incised, scratched, scraped, layered paint. She pulls things apart and builds them back up again iteratively. Her ‘trashed canvases’ bear the marks of violent intervention but to watch her working it is evidently a joyous process – noisy and fun – and the results have a tactile softness. Works in her Aug/Sept 2021 show on canvas, linen and surprisingly a metal table, mark her return to painting at bold scale (after a decade immersed in Polaroids) with the confidence to trash her work and get somewhere entirely new.

Sarah's bold semi-abstract work is made on canvas, often layered up over years and then scraped and scratched back resulting in Trashed Canvases; and she also makes tiny colour sketches over Instax (instant film) snaps.

The artist had a decade-long affiliation with Arup, the built environment/engineering design firm, latterly as a creative consultant. As inhouse global artist, working with Sir John Sorrell, Sarah developed "The Penguin Pool" from concept to being a successful global events series in 15 major cities worldwide. At Arup she also devised and piloted her "Working Without a Brief" visual creativity training for designers and other staff.

Sarah is experienced in public-realm art delivery planning and commissioning with clients such as Yorkshire Water and Tideway, developers, architects and local authorities. From 2009 to 2017 Sarah was a charity Board Member/Trustee of ACME Artists Studios in London. She is an elected council member of the Society of Scottish Artists and a member of the Scottish Contemporary Art Network.

While Sarah does not term herself a disabled artist, she is partially-deaf.

NB Until 2012, the artist was known as Sarah K. Davenport. Her degrees and early-career awards were gained under that name.

Sarah is perhaps best known for her artworks in oil and pencil over Polaroids, focusing on cities, but for many years her larger semi-abstract paintings explored the ideas around belonging(s) - that is not just the possessions we own, but how material culture is tied up with our attachment to places and people, to the past, our languages and family traditions. Across all that she does, Sarah focuses on everyday things; peripheral or seemingly inconsequential objects in the background of life happening. Painted words have long figured in Sarah's work as have recurrent furniture motifs.

Sarah Kudirka (under her maiden name, Davenport) won a number of early career awards and has exhibited regularly since 1988. She has works in public, corporate and private collections in Austria, Australia, Canada, Germany, Hong Kong, Lithuania, Spain, the UK and USA.