My art practice consists of two distinct, but related, strands. In the studio I create sculptural, shoe-like forms using constructed textile techniques. An intense focus on material and a process-led approach to making are central to this practice. The shoe-objects are worn in specific environments and form a starting point in the exploration of themes relating to sensory experience of place and narrative. 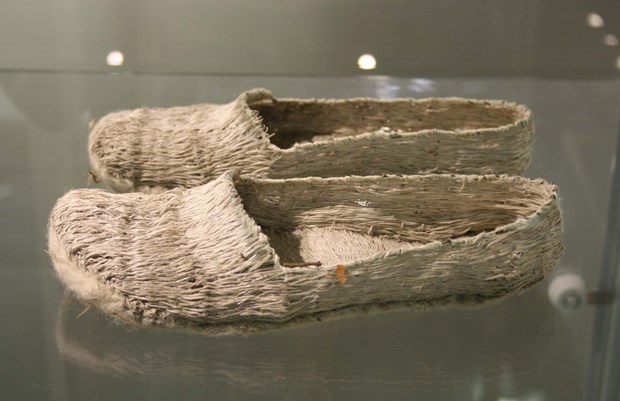 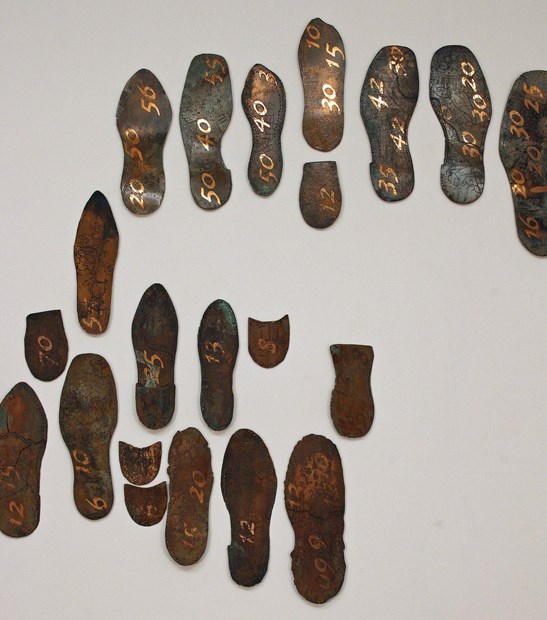 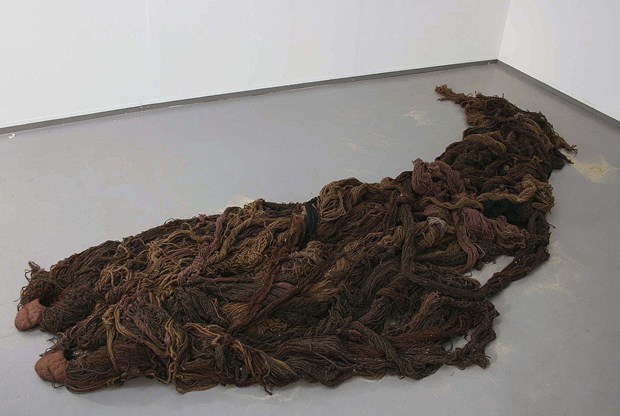 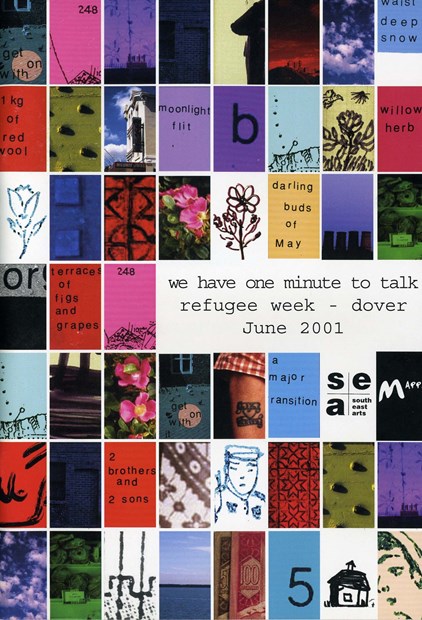 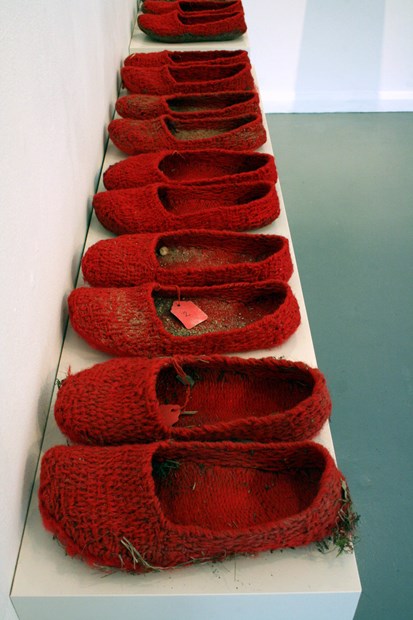 My art practice consists of two distinct, but related, strands. In the studio I create sculptural, shoe-like forms using constructed textile techniques. An intense focus on material and a process-led approach to making are central to this practice. The shoe-objects are worn in specific environments and form a starting point in the exploration of themes relating to sensory experience of place and narrative. An attempt to understand the space that exists between empirical measurement and a subjective experience of the world lies at the heart of this work. The shoes become manipulated and shaped through use, coming to embody a lived ‘moment’ in which layers of memory, personal history and physical engagement with place come together. Photographs documenting the wearing of the shoe-objects often accompany the pieces. The themes of place and journey-making which arise from this work are also central to the community projects that I have been involved in over many years. Working collaboratively, the relationship between image-making and narrative is explored as a starting point in understanding personal history. The most recent project with Mappa colleagues Richard Neville and Emily Lawlor was ‘Unpacking the Past’ (2007 – 2009) in which collections at Portsmouth City Museum were used as a starting point in gathering stories and visual imagery. The project, funded by HLF, resulted in an exhibition and publication.

2003-2005 Chancellor Park School, Chelmsford Worked in collaboration with the project architect to develop proposals for a scheme of artwork to be incorporated into the environment of the new school.  Included workshops with pupils, staff and members of the local community.  External gates, metal screens for the library area, tiled artwork and exhibition areas, door furniture and a   mosaic were deigned and produced. Funded by ECC ‘Per Cent’ for Art scheme.

2004-2005 Winter Gardens School, Canvey Island  Worked with infant and junior pupils to create large textile hangings for the new hall using dyeing and block-printing techniques.  A series of decorative vinyl motifs for glass were also produced. Both sets of art work were used to give identity to the space and to reflect Canvey Island’s history and landscape. Funded by Space for Sports and Art.

2001-2003 Space for Sports and Art.  Artist Consultant for Essex County Council’s new building programme.  Worked in the initial stages of the project with architects, staff and pupils at five Essex schools to develop a scheme of artwork to be located in and around new facilities.  Collaborated with artists to organise workshops and fabrication of pieces during 2003.

1998 Essex County Council Artists in Architecture - Diana Golding Centre, Braintree  The Centre provides day care for adults with profound and multiple learning disabilities. I worked with the staff and clients to develop a scheme of appropriate environmental art works, including the design and fabrication of an entrance gate.

1997 Essex County Council Artists in Architecture - Highwoods School, Colchester  As ‘Artist Consultant’ I worked closely with project architect and landscape designer to develop a series of art features to be incorporated into both the interior and exterior spaces of a new building.  I collaborated with staff and pupils to evolve a series of designs for architectural metalwork, paving and textile hangings.

2007- 2009 ‘Unpacking the Past’  A storytelling and visual art project that worked with a wide range of community groups in Portsmouth. Workshops were run in collaboration with Portsmouth Museum and Records Office and supported by the Heritage Lottery Fund. The project generated a moving range of personal stories, memories and art works. The final exhibition, September 2008 – January 2009, brought together stories, images and objects from the museum collection and moved to Portsea Library until autumn 2009.

1999-2001 ‘Maps for Life Dover’ Maps for Life Dover  A Mappa art and storytelling project with children from Refugee and Asylum Seeker families and their peers in four Dover schools. A series of art works including textile and photographic pieces made with pupils were exhibited in Dover Museum, January 2001.  We were awarded a South East Arts Regional Arts Lottery Grant and also raised funds from The Hilden Charitable Fund, Kent County Council, Dover District Council and Dover Town Council.

1998-1999 ‘Maps for Life’  We worked with pupils from Traveller families, Refugee and Asylum seeker backgrounds and their peers at Lewisham Bridge School, London. We focussed on ideas surrounding maps and journey making.  Various photographic techniques were used and we worked with a filmmaker to produce a video combining story and image.  An exhibition of the work was held at the school and moved on to Lewisham Library.  Funded with an ACE ‘Artists in Sites for Learning’ grant.

1997-1998 ‘Building the Personal Museum’, MAPPA worked with pupils at Copthorne Junior School on a project that celebrated the history and distinctiveness of the local environment as well as the pupils’ lives in the present. Funded by South East Arts.

1996 ‘A Sense of Place’, London Parish Map, Museum of London  As part of Common Ground’s ‘Parish Maps’ project, Mappa undertook an eight day residency at the Museum to create a large map of London with visitors.  Over 400 children and adults participated and the finished piece is on permanent display in the Museum.

2003-2006 ‘Pallant House Gallery Community Artwork’  I worked with visitors to Pallant House Gallery, Chichester, and with groups in the community to create a large tiled artwork, comprising of more than 400 individual pieces, for the new wing of the Gallery. Installed for opening of gallery June 2006.

2005 Burnt Mill Gate and Way Markers   I designed, and oversaw fabrication of, a gate and way markers, located alongside the River Stort at Harlow in Essex. The design reflected the natural environment and wildlife around the site. Work commissioned by British Waterways and Harlow Town Council.

2003-2004 Pride of Place, Worthing Museum and Art Gallery  Worked with service users from four West Sussex day centres to create a series of sculptural art works in response to the Museum collection.  The finished pieces were exhibited at Worthing Museum in January 2004

1998-1999 Colchester & Tendring Hospital, Children’s Ward Art Project  Worked as part of a team of five artists to develop, in consultation with staff, patients and visitors, a series of art works for the ward. I designed and oversaw fabrication of two decorative metal gates as well as creating a series of etched metal tactile wall pieces with Emily Lawlor.

I worked as lead artist on numerous projects with the Free Form team of artists, architects and project managers, designing and producing artwork for public spaces.  Major projects are listed:

September 2010 - March 2011  I worked with artists from Unity Arts Trust in Chichester, giving support in setting up and running community based arts projects with the local hospital and a community centre.

2008-09      ‘Unpacking the Past’, Central Gallery, City of Portsmouth Museum and Records Office

‘Artists in Architecture’, a travelling exhibition to Essex libraries.