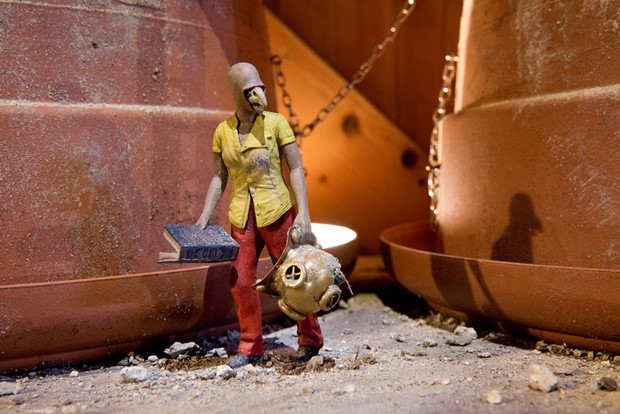 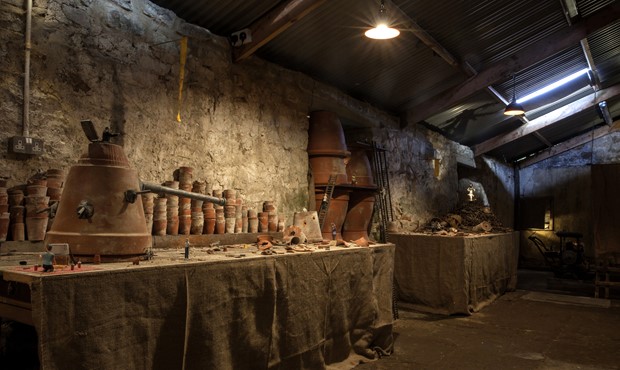 In May 2018 Peter opened Plato’s Lair a site-specific installation at Cheeseburn Sculpture Garden, Northumberland; commissioned as part of the Gillian Dickinson North East Young Sculptor of The Year, 2017.

Within the large Victorian potting shed a miniature society of bird like figures resides. Some seem content to watch television or picnic in the damp and dusty gloom, while others desperately try to escape into the sunlight looking for life beyond the potting shed. Guards police all the exits however and tyrannical leaders direct events in this tiny dictatorship.

Plato’s Lair is inspired by the themes and ideas explored in Plato’s seminal philosophical and political work ‘The Republic’ 380 BC.

Key to this piece is Book 7 ‘The Allegory of the cave’ otherwise known as ‘Plato’s Cave’ where Plato asks us to imagine prisoners shackled all their lives facing the wall of a cave where flickering shadows play; how this would become their only reality. The allegory is intended to provoke questions about the nature of reality; how our experience of the world may be subliminally or forcefully influenced and distorted.

A prisoner who manages to escape from their chains discovers that it is the puppets and fire that are casting the shadows and that their reality is an illusion. Once out of the cave the prisoners eyes adjust to the sunlight and sees reality for what it is, including plants, animals, stars and the sun, the latter for Plato represents enlightenment.