My work consists of sculpture and drawings; both occupy a quasi-psychoanalytical area in terms of their signification, and are concerned with the human body, its biology, and psyche. The work occupies a space between figuration and abstraction. I began making sculptures from about 1993; having previously painted from the early 1970s until 1992, my sculpture is often wall-based and tends to relate 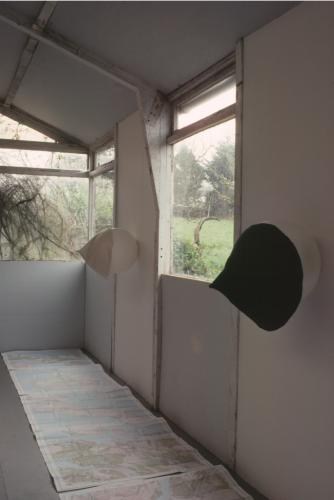 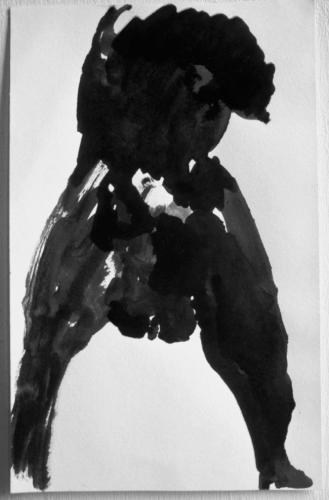 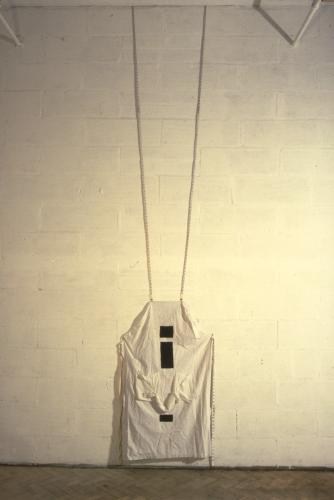 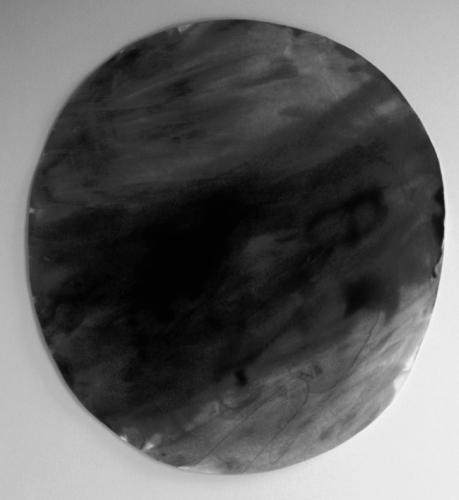 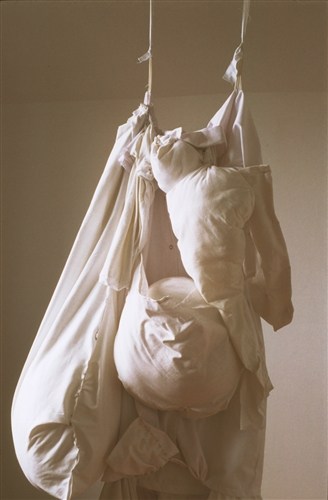 My work consists of sculpture and drawings; both occupy a quasi-psychoanalytical area in terms of their signification, and are concerned with the human body, its biology, and psyche. The work occupies a space between figuration and abstraction. I began making sculptures from about 1993; having previously painted from the early 1970s until 1992, my sculpture is often wall-based and tends to relate to painting. A central concern in the sculpture is the exploration of the qualities of and plasticity of fabric, in conjunction with other materials (e.g. latex/found/household objects). Some works include latex balloons which give a smooth, marble-like surface and form, but which are almost weightless. The balloons, sometimes contained/wrapped in fabric, are suspended, or mounted invisibly on the wall, denying some of the objects' gravitational pull. The resulting pieces are a dialogue between the tensions of fabric, air and latex and the surrounding space. My most recent piece: Untitled (Ladder, Plates and Sheet), 2004-5, uses the increased weight added to a piece of fabric by tying ceramic plates to its reverse side using strips of cotton tape. The fabric, with its semi-concealed plates, is suspended and held by a ladder placed at an angle against the wall. The installation of the piece carries feelings of precariousness, and an accidental and variable beauty. Its inspiration came partly from the dramatic swags of highly animated stucco/marble 'fabric' in the sculpture of Gianlorenzo Bernini (e.g. Constantine the Great, 1662-9, Rome, Vatican, and The Ecstasy of St. Teresa, 1645-52, Rome, Sta. Maria della Vittoria). Another source was my interest in the practice in Dogon architecture (Mali) of half-burying pots in the daubed mud walls of houses as signifiers of ancestor worship. In its use of a ladder, plates and a double bed sheet. Untitled also refers obliquely to relationship, domesticity and personal history. My drawings often use folk/fairy stories, also poetry, as source material, free-associating from phrases/sentences of text. The stories frequently contain mysterious transitions and transformations (physical, moral and psychological). Poetry often produces an analogous effect through the concreteness of its words, and its spaces, or absence of words, producing a meaning distinct from both. I have recently become interested in the writing of Gertrude Stein, whose prose carries the weight of poetry and the paradox of fable. I find a correspondence between these qualities in writing, the moment-to-moment subconscious thought processes of drawing and the plastic tensions of the sculpture. Influences Psychoanalysis, gender, film, art history, painting, sculpture, poetry, feminist theory, novels, surrealism, sexuality, fashion, anthropology, ethnography, archaeology, African art, oceanic art, mythology, religion Career path From 1975-78 I was a student at the Royal Academy Schools studying Fine Art, Painting. During this time I built on painting skills developed at the Byam Shaw School of Art (1972-75), increasing my facility in drawing, especially that of the human form. Later the MA Fine Art Course at Goldsmiths College (1981-83) increased my knowledge of art theory and contemporary art, and developed my interest in History of Art. The teaching I received at Goldsmiths also encouraged the freeing of my drawing and painting from the purely observational, allowing it to become more subjective in content. Subsequently I taught History of Art to degree students at various colleges as a Visiting Teacher; also to adults through the Workers' Educational Association, and in Further Education at Barnsley College (teaching, in the latter case, Modern and Post-Modern Art and Design). This precipitated a new phase in my work, in which I began making sculpture (about 1992-95). My solo exhibition 'Vierge Ouvrante' at the Tram Depot Gallery in London in 1995 was an installation of some of the best work from this period. In subsequent group exhibitions, notably 'Touching Matters' (Swiss Cottage Library, London 1998), 'Zero G' (Clare College Mission Church, Southwark, 2000) and 'Had we our Senses' (Alsager Gallery, Manchester Metropolitan University, 2000), I have exhibited drawings and sculpture made from textile/latex/found objects/mixed-media. Pam Day has collaborated with the environmental group PLACE since 1997. www.p-l-a-c-e.org