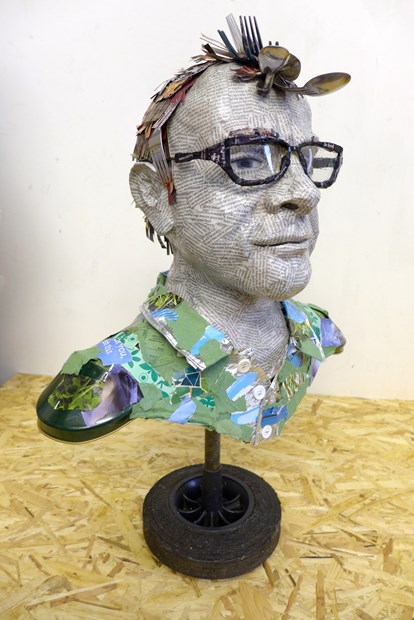 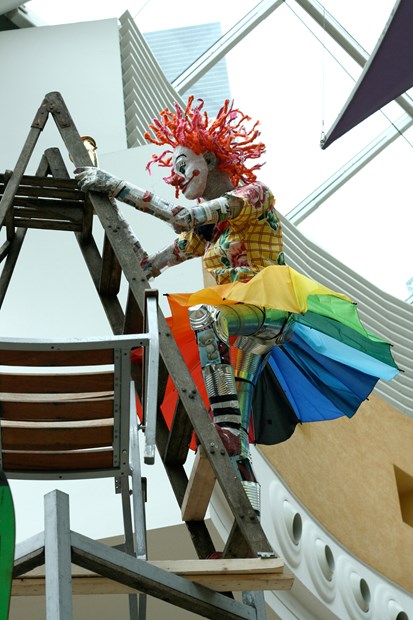 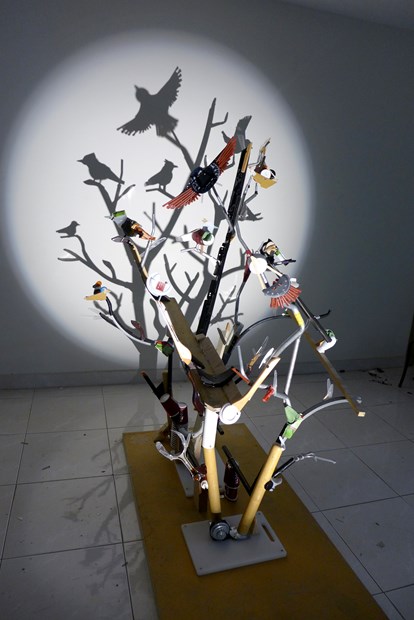 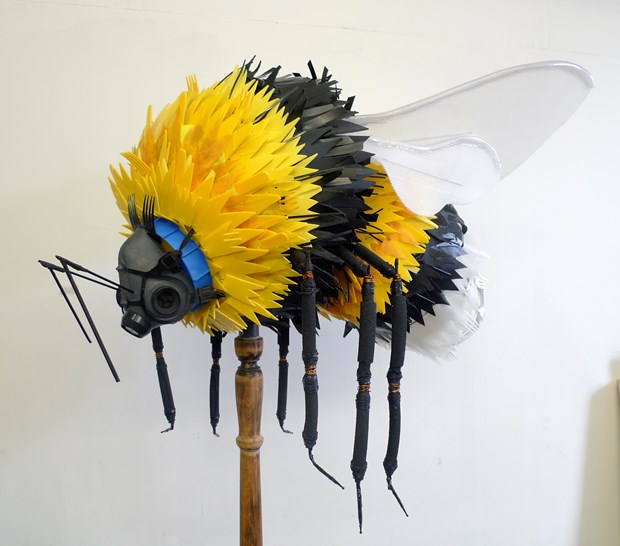 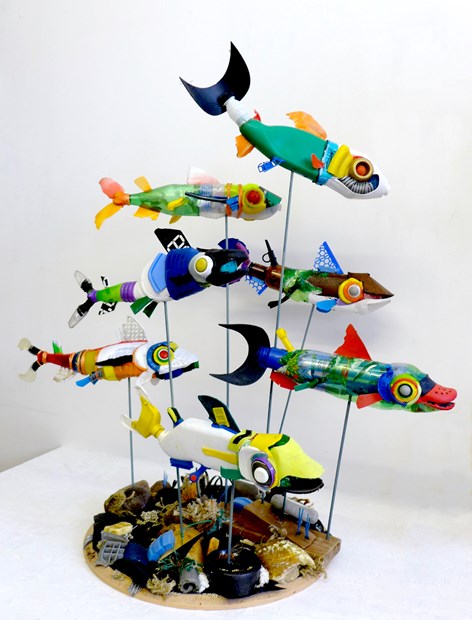 I am a sculptor currently working from The Harley Foundation Studios on the Welbeck Estate in North Nottinghamshire.

I have been working with recycled materials since graduating from De Montfort University in 1997, making unique figurative recycled sculptures from household waste and found objects. The aim of my work is to draw attention to environmental issues, therefore I am often commissioned to create work for businesses with similar aims.  My sculptures are usually figurative, for example a white-tailed bumblebee with a gas-mask for a face, a jaguar (big cat) made from electrical waste including satellite dishes and remote controls, and a life-size postman made from junk mail. I moved to London in 2002 to take my Masters in Scenography at Central St Martins, the legacy of which has been a continuing interest in interactive installations and storytelling through creative techniques such as shadow puppetry.  After a 15 year stint in East London, I have been living in Nottingham since 2017.

I make bespoke recycled and sustainable sculptures for businesses and events. These are often created from waste materials relevant to the location or client, and encourage people to consider the ways in which the things they throw away might have the potential for creative re-use. Alongside making my own sculptures, I work with galleries, schools, and other organisations as a freelance artist educator.

April 2016   I was commissioned by Port of London Authority to create a sculpture for their ‘Cleaner Thames’ campaign; entitled ‘Bellyful of Plastic’ this represents a school of smelt and is made from litter found in the Thames.

April 2016   I was commissioned to create a ‘shadow sculpture’ of birds in a treetop using light and found objects, for the AGAIN upcycling exhibition in Kuwait.

November 2015   Created a portrait bust of Hugh Fearnley Whittingstall from food-related waste, for a feature on BBC1’s The One Show to promote ‘Hugh’s War on Waste’.

November 2014   Commissioned to create a life-size figure sculpture for Bradgate Bakery in Leicester, made from reclaimed materials collected from the factory site.

Mar-May 2013   Enviromall project in 8 shopping malls across the UK, creating life-size figure sculptures inspired by mall visitors, and made from waste collected on site.

May 2012   I was commissioned by Unipart to create a life-size jaguar from materials recycled by BSkyB, including satellite dishes and remote controls.

Specifically focusing on the problem of litter on Walthamstow Marshes, I worked with rangers to collect waste from the site.  I then ran workshops for families on the marshes making sculptures from the collected materials, taking inspiration from the wildlife found there.  The resulting sculptures were exhibited at events including Countryside Live and Leytonstone Big Weekender.

I work regularly with Orleans House Gallery, where I have run after-school clubs, outreach sessions in primary schools, and family workshops. Activities are often inspired by gallery exhibitions. In 2014, 2015 and 2016 I designed - and worked with groups to create - interactive summer exhibitions for children, the first themed around dinosaurs, the second transport, and the third wildlife.   I have also worked with several groups to create themed costumes and floats for Twickenham Carnival.

June/July 2016           I worked at Whitefield School, a large special school in Walthamstow, running workshops for International Week.  We transformed the hall into a town square with sculptural street furniture including a market stall and clock tower.

February 2016            I worked with Year 1 classes at Chigwell Row primary school to transform the school hall into an installation inspired by the book ‘The Tin Forest’.

July 2015                    At Harris Primary Coleraine Park in Tottenham, I worked with classes from across the school to create a series of sculptural installations inspired by the work of artists such as Van Gogh and Kandinsky.

July 2015                    A family workshop at Vestry House Museum entitled ‘Fantastical Flying Machines’ was inspired by the first British aeroplane taking off from Walthamstow Marshes in 1909.

February 2014            As part of Go Green Week, I worked with foundation students at Camberwell College of Art to build a large boat sculpture from found objects.

Inset/CPD for teachers and other adults

I run workshops for adults, sharing my knowledge of sculpture processes.  I have run sessions at shopping centres in Bromley and Basingstoke for teachers, and CPD sessions in schools.  I recently held a training day for Royal Mail staff creating sculptures from waste collected at sorting offices.

I am a member of LEEF (London Environmental Educators Forum) and was made a Fellow in 2015.  This is a skill-sharing network through which I have attended several environmentally-themed training events.  In 2012 I undertook Crafts Council Object Handling training at Orleans House Gallery, and in the same year trained to be an Arts Award Adviser (Explore and Discover).  I have also attended puppet-making courses at Little Angel Theatre and Emergency Exit Arts, and have attended training events with Bambooze Theatre Company looking at strategies for working with disabled students.