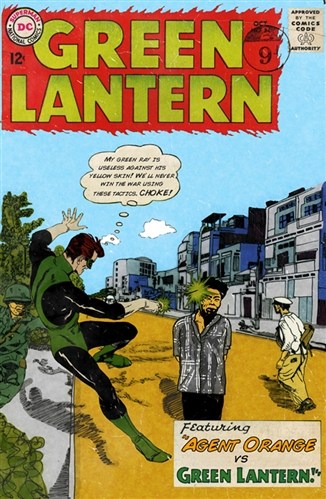 Using Eddie Adams’ picture depicting the execution of a Viet Cong Officer by General Nguyen Ngoc Loan during the Vietnam War and transforming it into a cover from the DC range of the period featuring the Green Lantern. Over the decades the pro-US politicisation of superheroes has decreased significantly, from being propaganda tools of the Golden Age that fight the enemies of democracy (gangsters, fascists, communists, atheists, take your pick) into increasingly fractured and contradictory anti-heroes often at war with themselves. This image marks a return to my own childhood, where the USA stood for “Truth, Justice and the American way.”, but in reality was a much more complex and contradictory machine that caused as many ills as it cured.