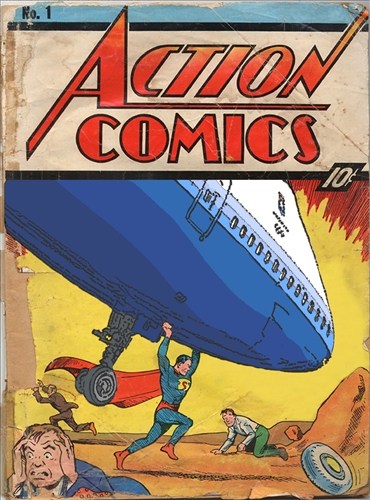 My understanding of the USA as a child was informed by superheroes, Star Trek and innumerable Black and White Westerns where the good guys wore white hats, America was a mythical land where nobody lied and you didn’t shoot anyone in the back. Obviously this ideal America has fallen from grace as I passed from the 70’s to now. The stories of heroism are still there, they’re just harder to find and even harder to understand.

For me, Superman was the epitome of all that was good about the USA. The ultimate alien immigrant, Superman became a symbol of the American way. Over the decades the pro-US politicisation of superheroes has decreased significantly, from being propaganda tools of the Golden Age that fought the enemies of democracy (gangsters, fascists, communists, atheists, take your pick) into increasingly fractured and contradictory anti-heroes often at war with themselves.

For this first image, Superman becomes implicit in the attack on the World Trade Towers. The welcome alien turns against the state in an act of terrorism.