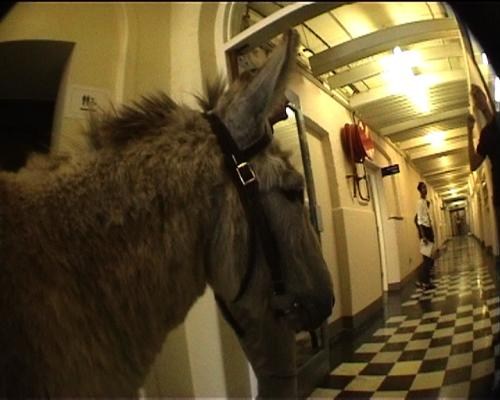 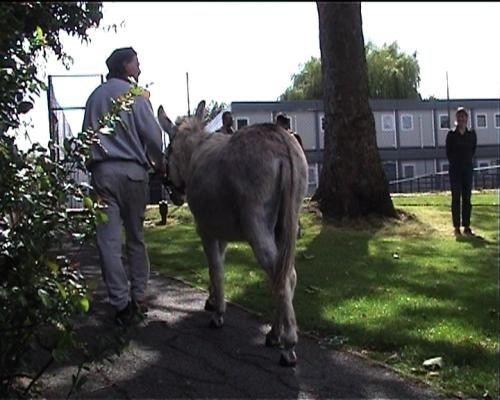 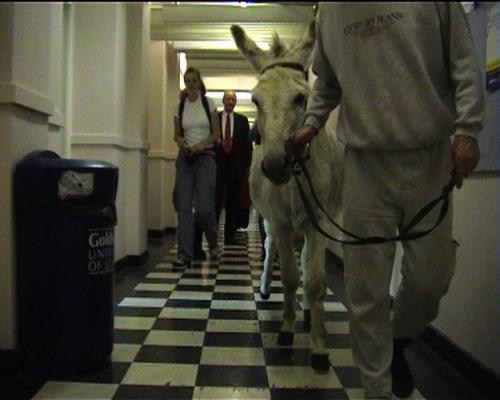 I invited Lenny Thorne to bring one of his donkeys to Goldsmiths. He arrived with a young donkey called Duke Humphrey, after the road of the same name that is the location of the donkey-walk on Blackheath where Lenny and his donkeys have entertained local children and tourists for over fifty years. He also brought a more mature donkey, Ringo, in reserve, and a very young scruffy little brown donkey, for the ride. Since arriving at Goldsmiths I had been studying different routes around the campus. The particular route I wished to investigate with Humphrey was the smoothest, involving no steps, only ramps, slopes and changes in surface texture. Humphrey fulfilled his stereotype by stubbornly refusing, with all his animal strength, to enter the building even when a carrot was held temptingly in front of his nose. Catching sight of his reflection in the glass doors, he seemed to sense the history of this particular art institution and feared his fate. The black and white checked floor also seemed to bother him and eventually we gave up. Humphrey was tethered outside whilst a wiser and more experienced Ringo was sent for. With years of nativity plays and school fetes under his belt, entering Goldsmiths didn't seem to bother this confident and trusting beast, who was soon trotting down the long corridors of the main building, my team of assistants, responsible for opening the many fire doors, struggling to keep up. Receptionists looked up from their desks to see a donkey walk past their office door. Students appeared bemused as they moved out of the way to let this humble creature complete his journey, his incongruous presence changing the experience and understanding of the environment and the mental map held by those who crossed his trajectory. Outside visitors to the college were greeted by the tethered Humphrey and the braying of the baby donkey stranded in the van.