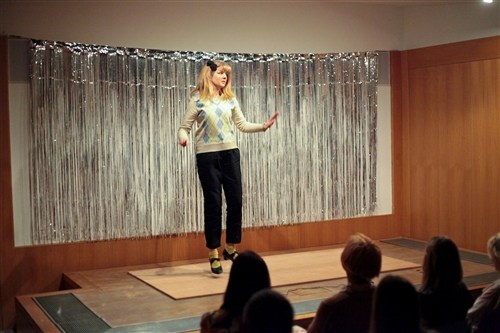 Performed at The Private View of The London Open, The Whitechapel Gallery, London, July 3rd 2012, selcted by Rodney Graham.
'Dance to Music' originated from me discovering I was related to the great music hall artist, Dan Leno and that he had lived part of his life in Brixton, where I was living at the time. I wanted to work on a performance that could be like a Music Hall skit and I was very interested in the line between melancholy & humour. I had this game on my phone called The Dancing Panda which somehow seemed to fit with this idea and I decided to make up a dance routine, using steps I could remember from Tap Classes I did as a teenager.
'Dance to Music' is a performance that I have repeated on numerous occasions in different contexts and places; performing as a support act before a band in a music venue in Brixton, a charity gala in a London theatre to PS1 gallery in New York. I made a video of the performance at Salford Lads Club, (which is famous for appearing in a Smiths video), for an exhibiiton at Mancheter University and a copy was kept in the Lad's Club Smiths Room archive.