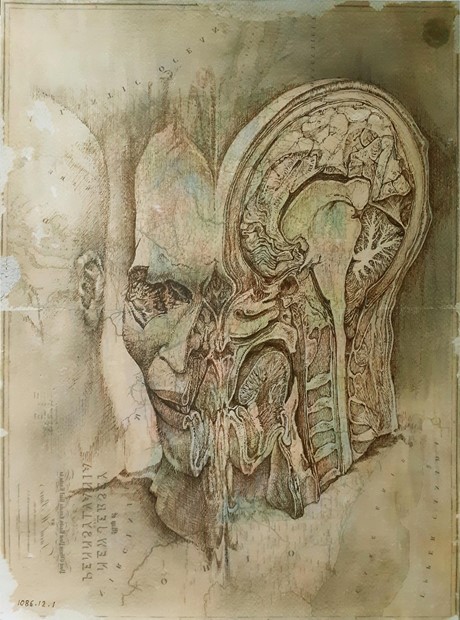 This specimen/subject caught my eye during my first residency at the Mutter Museum in 2011. It is not on public display, but in cold storage in the 'wet room'.  I was struck by several things: it is a sagittal section of a human head, which in itself isn't uncommon in medical collections. But it is plainly African-American - the first I'd come across. The sagittal cut was neat and clean, but in contrast the eye had been crudely enucleated. What gave me an emotional connection with him, however, was the scatter of tiny whiteheads on his cheek, and the little tufts of stubble on his weak chin. At that time he was labelled simply '2005-1.head': a temporary accession number given as the museum was organising it's collection.
When I returned this year, this was the first specimen I wanted to visit. I was struck now, as then, both by features mentioned above, and by the visual distortion caused by the heavy glass of the squared jar.  Looking at it from an angle - the front right corner of the jar facing me - you can see both sides of him. The medical gaze admires the information presented showing the brain, upper spinal cord, tongue and sinus cavities... the social context, however, of this unique and recognisible face offers a contrast to the anatomy within. The blurring caused by the corner of the jar creates a borderline between these, where the inner and outer are dissolved, simultaneously separating and merging.
"Head" now has a proper museum accession number, and it should be possible for me to find out more about him. However during my visit the Mutter went into shutdown - a day ahead of all the other museums in Philadelphia, being very aware of the fact that it's current exhibition concerns the 1918-19 flu pandemic, and wanting to set an example. Finding  more information on this specimen will have to wait.