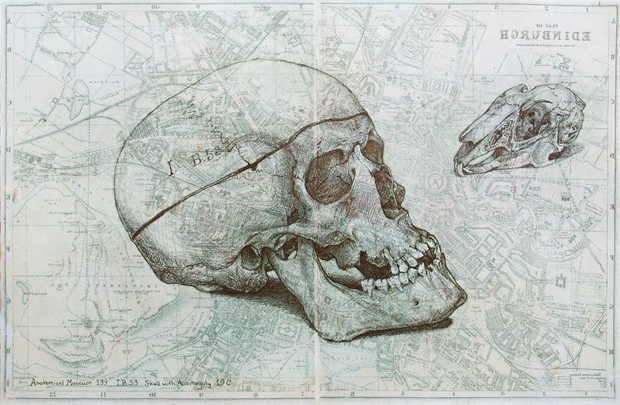 This piece is a reference to the use of selective comparative anatomy within atlases largely devoted to human anatomy – for example, the human skull resting on a dog's skull in Andreas Vesalius's "De Humani Corporis Fabrica (On the Fabric of the Human Body)", or William Cheselden's image of a child's skeleton standing next to a horse's head in his atlas "Osteographia".
The skull with acromegaly was drawn during a recent artist residency in the Anatomy Museum of Edinburgh University. The hare skull was given to me by the curator of that museum, for my personal collection of comparative animal skulls. I had not examined one closely before, and was taken by how much larger it is than a rabbit skull. It was a natural choice as a companion image to the human skull in this drawing.