Bowed Joseph and the lady of Surgeon's Hall 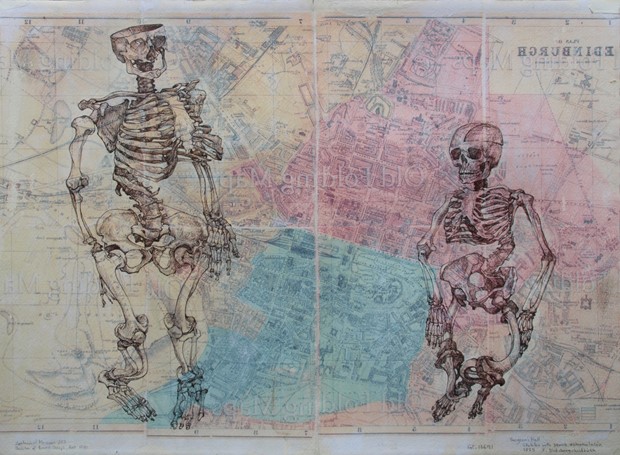 This drawing seeks to compare and contrast two specimens from two different anatomical collections in Edinburgh. It is a visualisation of variation in pathologies – both skeletons suffering from the same or similar conditions. There is a point to be made here in reference to differences from the idealised or 'normal' human body as presented in anatomical teaching texts. Additionally, there may be a commentary on gender issues in departure not just from the physiological norm, but the male norm – how the 'othering' of deformity might be furthered if the specimen is female.
The skeleton on the left of the image is from the Anatomical Museum of Edinburgh University's Medical School. A well-known personality of the time, 'Bowed' Joseph Smith suffered from rickets and scoliosis. He was a cobbler and notorious rabble rouser, and was said to have made his wife walk behind him in public. He died in 1780 after a drunken fall from a carriage.
The skeleton on the right is from Surgeon's Hall Museum, sharing a cabinet with another skeleton from the same period which suffered from the same pathology – osteomalacia. She was known to have died in 1825 from complications during childbirth, as did the other skeleton in the same case. No information is given regarding her name or occupation. This may simply be due to records not being available: I did not ask at the time, as I was interested in working solely with what was available to the public.
Materials: Sepia pen and white Conté pencil over transfert-collé map of Edinburgh on Bockingford paper