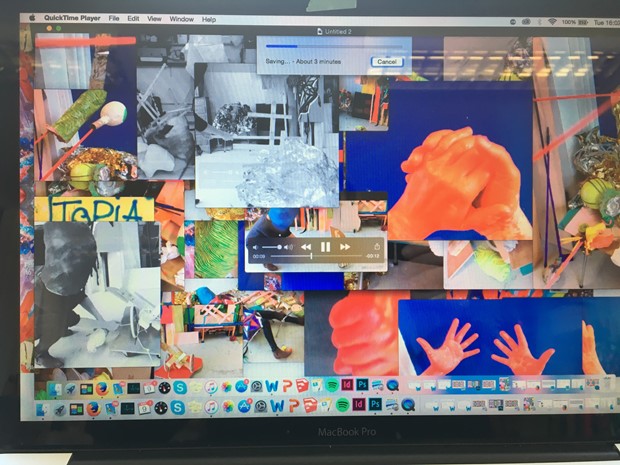 Atelier Gestures (Long Lost Futures) grew out of my studio practice. I made a couple of constructivist hats, to be worn as part of my ‘studio uniform’. Wearing the hat I became aware that I was performing art rather than making it. I became part of the work or rather I performed it. The ritual, the movement, the gesture came into focus. The play, or rather the playing. As the opposite to work. Atelier Gestures (Long Lost Futures) is a film about the journey – as opposed to the goal. It explores our way of being in the world, the traces we leave behind.

Atelier Gestures explores 'the peculiar relations that art establishes between the living body, the forces of the universe and the creation of the future' (1) and is an ode to getting getting lost, killing time but it is also grappling for something for something beyond the current concerns with objecthood that in this political climate seem outdated, trivial or even irrelevant. A retreat into the studio could be seen as passive and/or indulgent, however play is protest precisely because it is not productive; it is 'wasting' time. It is an excessive act. Play creates a utopian alternative to the capitalist narrative.