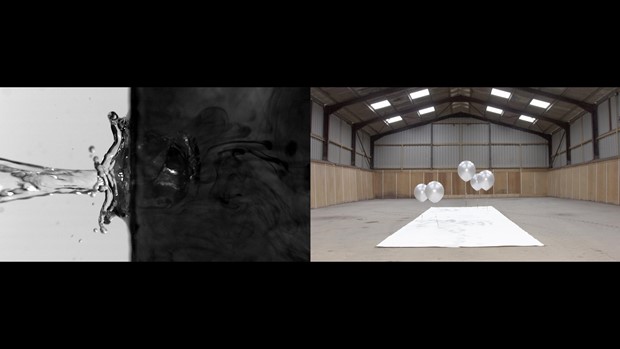 Kate Hammersley is the first artist-in-residence at the University of Oxford Department of Engineering Science (supported by Arts Council England). She worked alongside hypersonics research scientist Dr Tobias Hermann who studies cooling systems for spacecraft re-entry into the earth’s atmosphere. Throughout her practice she has experimented with different materials and materiality to push materials to the limits of their capability.

Flows, is a 6.5-minute film and 9 metre helium drawing, which considers how we make sense of high speed scientific experiments and their context. The work attempts to shift the emphasis away from a human centred view of the universe to look at the relationships between art, science and macrocosm. Conceived as a split-screen moving collage of experiments, the film Flows was shot on three different cameras each with different aspect ratios, two colour, one high speed black and white. At the end of the film is the sound of the sonic boom recorded during a live test in the Thermofluids Laboratory.