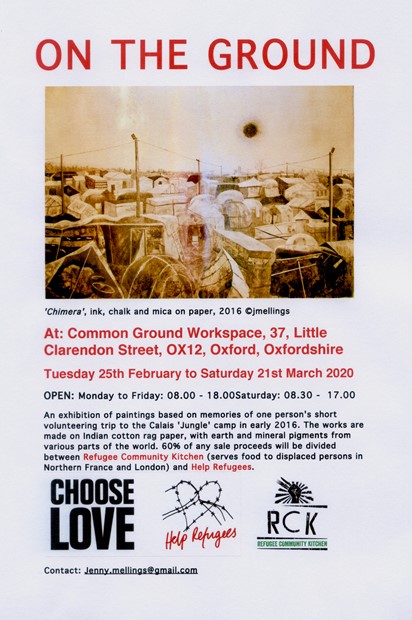 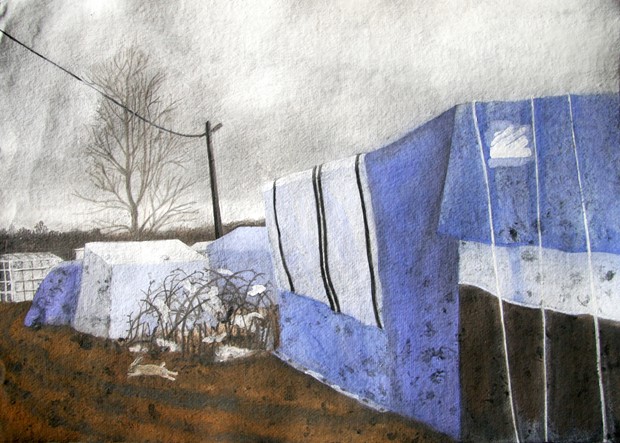 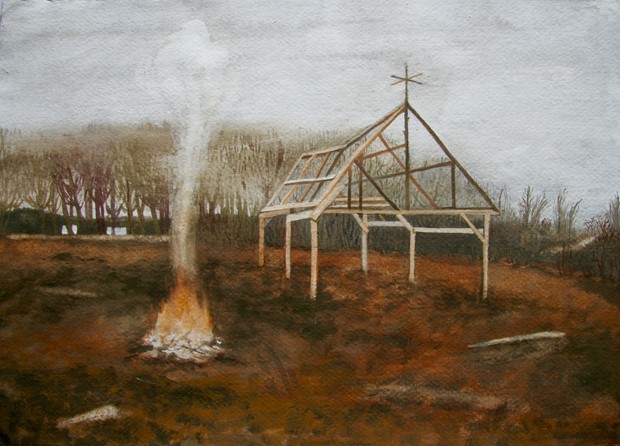 PREVIEW ON Monday 24th FEBRUARY 7-9pm ALL WELCOME! The paintings in this exhibition were made following a short working visit to the Jungle Camp at Calais in January 2016. Like countless other volunteers, some much longer term, I went along there with the sole intention of offering practical help where needed such as in the kitchens. But the experience remained so strongly in mind during ensuing months that images appeared, based on impressions of the camp and warehouse, and a few photographs taken during breaks. They were made with earth from various parts of Europe and the Middle East, including lapis lazuli from Afghanistan, commercially prepared ochres from France and Germany and colour collected from Devon.The idea of this exhibition arose from an awareness of the fact that there are still many vulnerable refugees in Northern France whose lives depend upon support that has not been provided by governments. For example, Refugee Community Kitchen is still supplying daily hot meals to thousands of displaced people in both the Calais region and London. All of their work relies upon donations of resources and time from the greater community as it has done since it began in the autumn of 2015. Therefore it is hoped that this small body of work might help as another reminder that the crisis is ongoing. All the paintings are for sale and 60% of any amount raised by this will be divided between Refugee Community Kitchen and Help Refugees. The remaining 40% would cover costs and perhaps make another volunteering trip possible in the near future.

This endeavour began via fundraising efforts with Creative Collective for Refugee Relief/Art Without Borders on Facebook in 2015, and earlier, with similar groups. Those involvements alongside various news reports were what prompted my journey to Calais in the first place. There I met a group of volunteers from Bridport Unitarian Chapel in the Garden, who then kindly hosted ‘On the Ground there in autumn 2017.