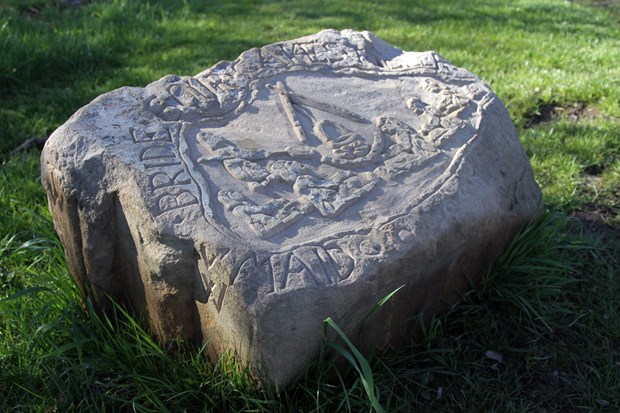 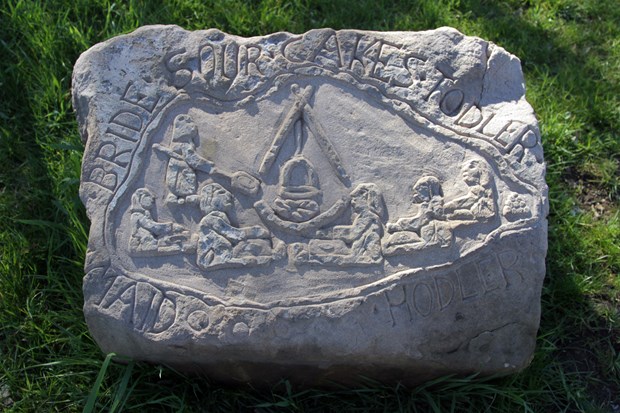 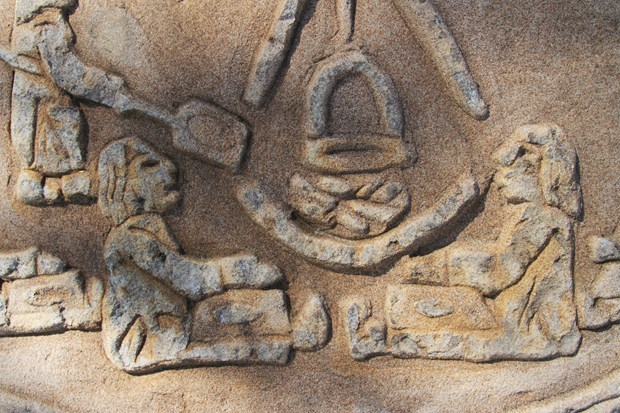 Wedge-shaped stone with banded architectural detailing on the north face.

The upper face contains a detailed relief carving with the words, ‘SOUR CAKES’ at the top. The scene shows six women, five of whom are seated around a fire, baking oat cakes. The names, ‘TODLER’, ‘HODLER’, ‘MAID’ and ‘BRIDE’ are carved around the perimeter of the stone.

The Cuningar Stones is a permanent public art project for the Cuningar Loop Woodland Park, a 15 hectare former landfill site in South Lanarkshire between Rutherglen and Dalmarnock. As part of the project 15 large carved sculptural works were produced drawing on an extensive programme of research and community engagement which examined the complex social, industrial and natural history of the site.

Each stone was recovered from the ground after being dumped there during the demolition of the Gorbals in the 1960s. Developed to reference Scottish folk carving while retaining the aesthetic of an architectural ruin, the stones act as landmarks within the landscape encouraging exploration and generating interest in the identity of the park. Each stone retains the architectural details and other marks from its history with my own carvings intervening in these layers. Many of the carvings reference the rich flora and fauna of the park.

The content of the carvings was developed through the supporting engagement programme involving adult and children's stone carving, mask-making and design workshops, audio history recordings, exhibitions, talks and events. This self-led project was supported by Creative Scotland with National Lottery Funding.

For further information on the project see: www.cuningarloop.tumblr.com