Concepts
The key ideas which inform my work are an on-going interest in the ambiguities and overlapping realities we value in contemporary life. Themes, outside traditional Western Art, which celebrate conceptions of ‘being’ and its boundaries are the background material for my practice. The slippage between the visible and the inexpressible is the territory for exploration.

From my recent study 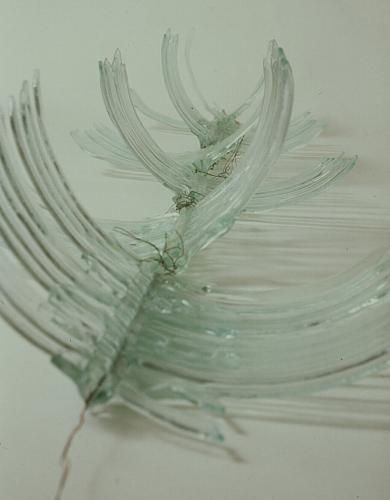 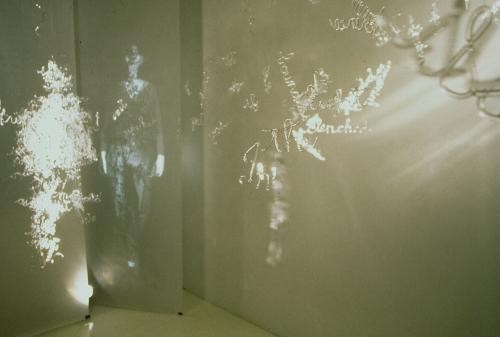 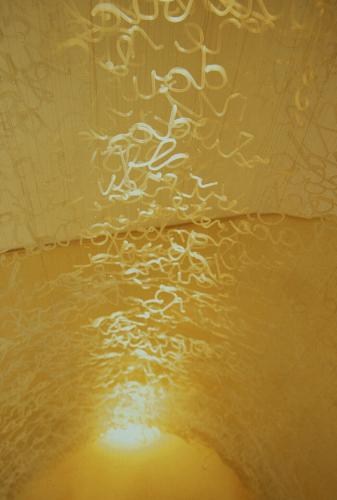 Concepts The key ideas which inform my work are an on-going interest in the ambiguities and overlapping realities we value in contemporary life. Themes, outside traditional Western Art, which celebrate conceptions of ‘being’ and its boundaries are the background material for my practice. The slippage between the visible and the inexpressible is the territory for exploration. From my recent study of ‘The Artistic Self’ (The subject of MA Dissertation in 2000), which was embodied in the works ‘void’ 2000, and ‘voodoo granddad’ 2000, my work has concentrated on the interface between the ‘self’ and ‘other’ through various collaborations e.g.. ‘walk...still 2001, ‘suspended journeys’ 2002, and a performance work, ‘70%H2O’ which investigated, through improvisation, the fluidity of relationships between individuals and also the different art-forms of movement, acting, and visual art. Glass, formed into words suspended in space with photographic projections, evokes the fragility of the imagined spaces we inhabit; the alluring sparkle suggesting images on the periphery of our vision. ‘pulled up by the bootstraps’ 2002, inscribes, by the ritualistic craft of making each glass word by hand, a record of those relationships which have moulded my own sense of self-hood. By contrast, ‘no name’ 2002, uses the same method to express the opposite: the many who have died without being identified as individuals in our conflicts. The network of individual imaginations, not visible in the communication systems of contemporary culture is expressed in our artistic contributions towards each other. These are developed in ‘underground mycelia’ which constitute the particular reality I choose.Influences 1) Birth and youth spent in Highveld, South Africa: this profound influence is visible in my on-going interest in cross-cultural and non western value systems, prehistoric art and experiences of nature in the wild. This has informed my vision of mans' relationship with the environment and others. 2) Contemporary life as an artist in London: exposure and interest in the flowering of recent art expressed in projects like Tate Modern with lively discussion/exploration surrounding the work of art in the 21st Century. 3) Psychoanalysis and art therapy: ongoing study of inner psychology, values and motivations inform my own practice and theoretical researchCareer path Beginning with Fine Arts at the University of Natal, South Africa, I spent 10 years in architecture and interior design (Managing director of my own design studio, Integral Design Associates), completing more than 10 major commercial and residential projects. Since emigrating to UK, I have concentrated on the visual arts. After a postgraduate diploma at Central St Martin's School of Art, part-time while working at EPR Architects, London, and a scholarship to Tobias School of Art in Sussex, I was awarded two six-month painting residencies at Florence Trust Studios in Highbury. A further postgraduate painting diploma at Byam Shaw School of Art finished in 1996. In addition, in 1996-7, I completed City and Guilds Level 1 courses in multi-media (photoshop, editor, animation), desk-top publishing (pagemaker, quark, photoshop, graphics and illustrator). In 1998 I was introduced to glassmaking in fusing and kilnwork workshops as well as hot-glass sandcasting. I completed an MA at Surrey University for Art and Design at Farnham in 2000, specialising in glass (88% for final project). This project is entitled ‘void’ and ‘voodoo granddad’ as seen in the slides. From 2000 to 2003 I have exhibited widely in UK and abroad. In 2002/03, countries included Germany, Poland and, touring with a performance, Europe, Finland, Sweden, planning to finish at Edinburgh Festival in 2003. I am a member of Contemporary Glass Society UK, Circle-X Arts (performance group), ICA, as well as being a founder member of Novalis Institute for the Arts (SA, a cross-cultural educational and inter-disciplinary arts charity). Exhibitions Update: 2002 Aug-Dec '70%H20', live performance, Germany, Holland, Sweden, Finland, Poland 2002 Aug 'suspended journeys', galerie Sztuki i Wspolczesnej, Poland 2002 Jun 'Glasplastiek und Garten', Munster, Germany 2002 May 'tracks', New London Glass, Barcelona, Spain 2001 Nov 'tracks', New London Glass, London Underground 2001 July 'spread the word', Henley Festival, Henley-on -Thames 2001 Jun 'visual haiku'. Arthouse Foundations, Peterborough 2001 Jun 'summer sculpture garden exhibition', Red House Museum, Christchurch 2000 Nov 'place replace', group show, Wroclaw, Poland