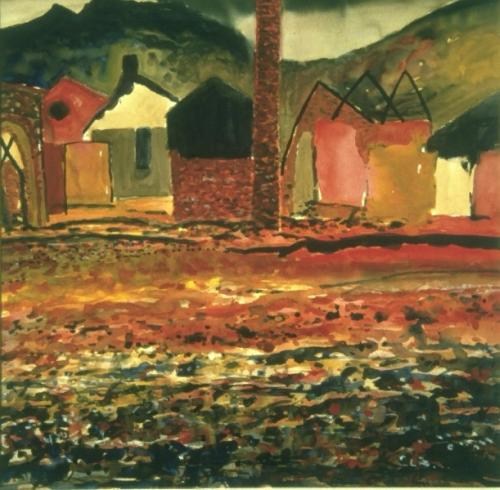 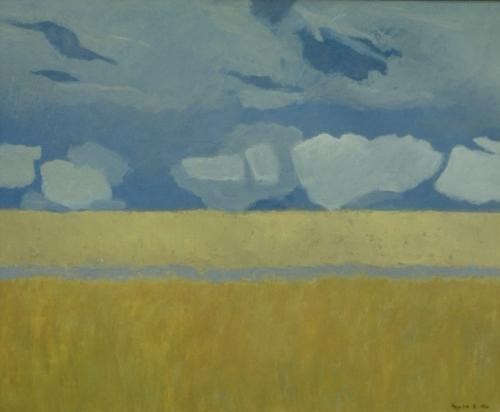 "Industrial landscape (ruins and houses on a hill)" 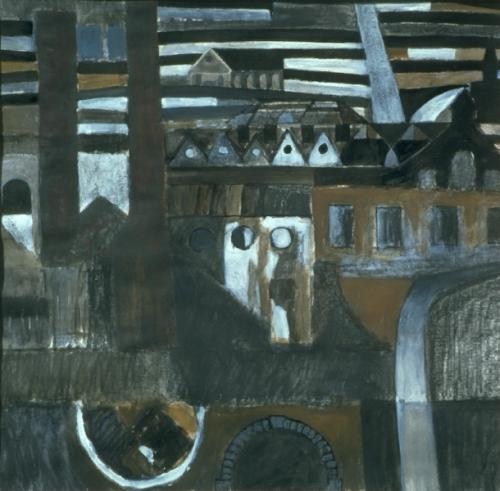 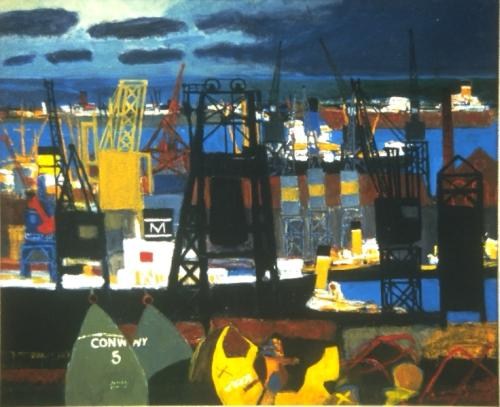 "Remnants of the past, Swansea" 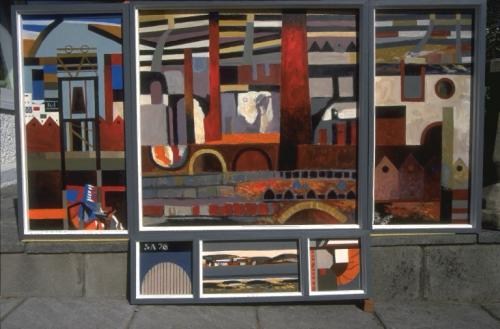 "My paintings are of landscapes and marinescapes particularly in those where industry takes place or has taken place. These areas with their colour, pattern and texture stimulate me as a painter." George Little was born in 1927 in Danygraig, Swansea where his earliest visual memories were of looking down on to the then constantly busy docks, full of ships with their multicoloured smoke stacks and the dockside bristling with coal hoists, cranes, engines, wagons, sheds, buoys and capstans. He started his art training as a sculptor at Swansea College of Art on his return from military service but, having seen his paintings, the principal KW Hancock and the Swansea painter Will Evans suggested that he took up painting. At the end of his studies in Swansea he was awarded a bursary to go to the Ruskin School of Drawing of Oxford University. After two years at the Ruskin he started a forty-one year career in teaching beginning at Oxford Street Secondary School in Swansea then Barnsley School of Art, Swansea College of Art and finally the University of Wales Swansea, all of which he found very rewarding and with the fortunate luxury of time to also paint and exhibit. His subject matter as a painter is often based on the industrial environment in which he grew up and his later work has reflected the decline and eventual decay of those areas as heavy industry has been replaced. He also works in other industrial areas such as the Welsh valleys, Cornwall and the North of England where he can still find the remnants of the past in the dereliction of factories, mines and dockyards from which he constructs his own and very individual interpretations of the colours, shapes and textures that he sees there. He finds similar inspiration in the colours and patterns of landscapes and marinescapes, especially in Wales and in Brittany. From the inception of an idea, the final work may take as long as three years to complete and many of the images used in his industrial paintings are from studies made as early as the 1950's. Some research for his industrial paintings has been supported by the Arts Council of Wales. Awards and prizes Awarded Open Scholarship in first year Swansea School of Art Bursary for Post-graduate Study, Ruskin School of Drawing, University of Oxford A number of prizes awarded during post-graduate studies Prize, Industrial Britain Open National Competition, Chenil Gallery, London 1955 Purchase Prize, Industrial Wales - Arts Council Exhibition 1960 Special Prize (John Piper), Mid Wales Open Art Exhibition, Aberystwyth 1983 First Prize, Coal Industry National Art Exhibition, Blackpool 1989 Arts Council of Wales Travel Grant 1999 Public collections and commissions Barnsley Education Authority Bertshinger & Co. Ltd., London British Rail Contemporary Art Society for Wales EMBS, University College, Swansea Ivor Russell & Partners, Swansea Kirk Sandall New Junior Modem and Infant School, Yorkshire Lloyds Bank Metal Box Co. Ltd. Mid Glamorgan Education Authority Miners Library, Hendrefoilan, Swansea National Library of Wales Royal National Eisteddfod Collection Ryburn Secondary School, Sowerby Bridge, Yorkshire School for Deaf and Dumb Children, Llandrindod Wells Ty Olwen Hospice, Morriston Hospital, Swansea University of Wales Swansea Welsh Arts Council West Glamorgan Education Authority West Wales Association for the Arts Picture Loan Scheme West Yorkshire Schools Collection Mural 27 ft x 7.5 ft for Home for Mentally Handicapped, Swansea Mural 40 ft x 4 ft for Sports Pavilion, University of Wales Swansea 1996 Book jacket design : "History of Wales 1906 - 2000"- University of Wales Press 2000 also on cover of University of Wales Press catalogue 2000 Private collections Great Britain, Eire, France, Italy, Germany, Austria, Spain, USA, Canada, Australia and Far East