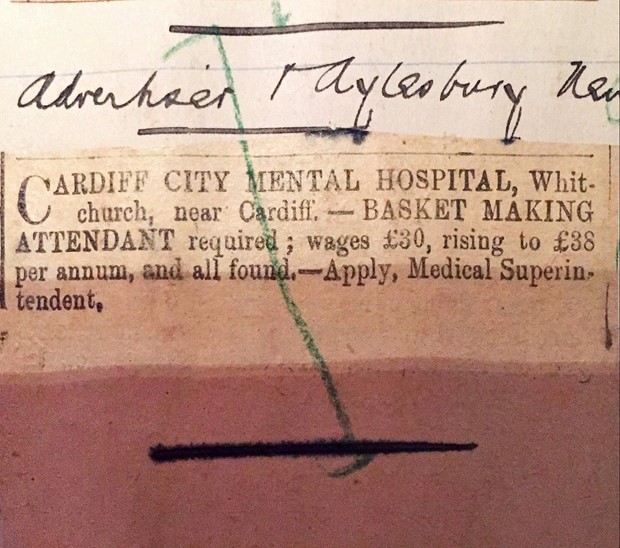 An ongoing socially engaged artwork which focuses on historical and present day theory about therapeutic work. The project emerged from the overlap between my experience as a long term mental health service user and my interest as an artist in basket making as a cultural practice, a means of communicating, a conduit.
Basket weaving has long been associated with the stereotypes of neurodiversity - ‘basket case’, originally used to describe casualties of WW1, being a familiar one. Partly a reaction to the use of restraint, ‘moral work’ which became ‘moral treatment’, then ‘therapeutic work’, was introduced in the early 1800s,
Fast forward to the 21st century, and there clearly still exists within the mental health services (both in and outpatient), a belief that there is a value in this type of treatment. Ranging from a box of aging art materials being brought onto the ward twice a week for patients to 'do craft’ , to community OTs supporting patients, post discharge, to engage with the outside world.
My interest in basket weaving began early in 2018, when I started visiting the archivist at Whitchurch Hospital, she showed me wickerwork made by patients from the 1950s onwards, I found them profoundly moving. These precious artefacts which carry within them so much mental pain and such historical significance prompted me to attempt to teach myself, and in July 2018, I ran the Underground Basket Weaving for Beginners sessions at ArcadeCardiff for antiuniversity so that others could also learn with me, a kind of co learning experience, which led to the inception of the Exchange. This has developed into a one on one interaction which provides a social/practical/metaphorical space to consider what happens to us when we engage in the act of making together. Sometimes a dialogue will take place, sometimes not, but we will make two baskets, one for you and one for me, and they will forever be a record of this time we have spent together.