IS MY BODY OUT OF DATE? THE DRAG OF PHYSICALITY IN THE DIGITAL AGE (Episode 2) November 2018 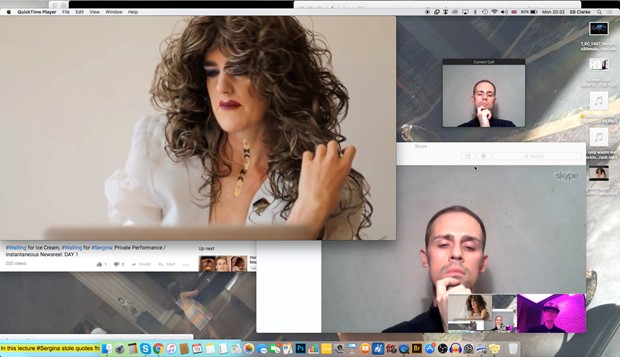 Second episode in an ongoing series of live lecture performances on the drag (performance) of physicality in the digital age, where at least one performer performs online. In this case it was Vladimir, who joined via Skype from his home in Belgrade. The lecture, devised as a kind of love song to herself, put various theorists in dialogue, and recited lines from #Sergina’s songs. Theorists quoted were:

The lecture was live-screenshared and screen-recorded. The lecture interacted with previous videos made with Bjelicic, in order to create confusion about what was live and what was pre-recorded. The sequel was presented at the Body of Knowledge conference in Melbourne in June. (See p. 5)