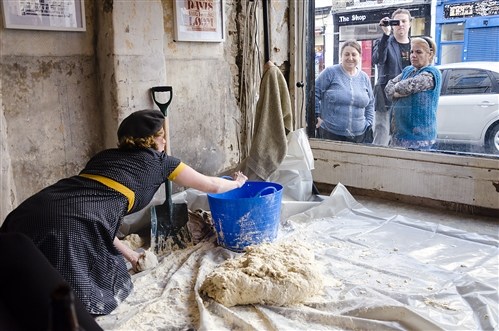 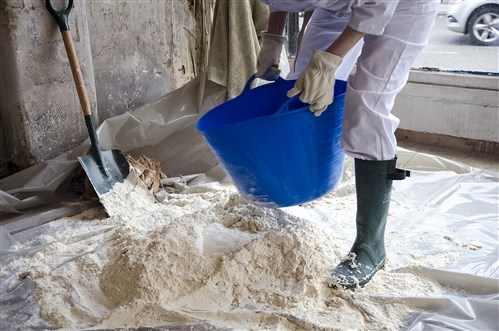 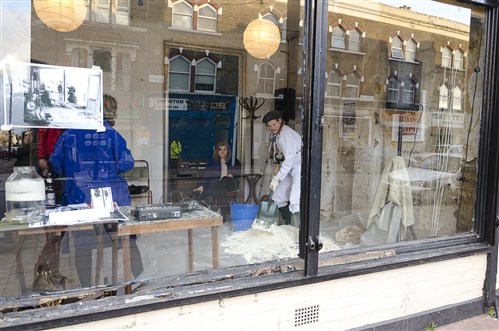 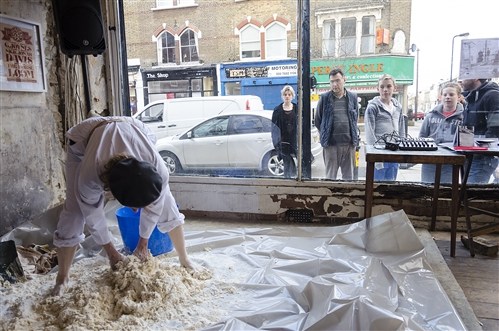 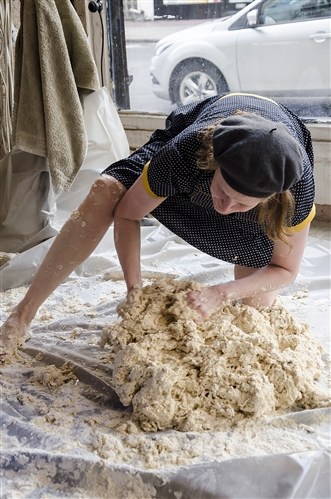 At least 15 kg of flour were used in this performance. Eldi used a basic uncooked play dough recipe which called for flour, water and salt. Wearing pristine white painters' cover-alls, white leather work gloves and a pair of workmans' wellington boots, she spread a heavy-duty plastic tarpaulin over the venue's rugs, and proceeded to empty out sack after sack of flour onto the floor. She then made a well in the flour using a gardening shovel and poured some water into the flour, using the shovel to mix it, as if making concrete. She repeated this until all the flour was moist and doughy. When it was no longer possible to mix the stiff mixture with the shovel, she bent down and tried to use her hands, but it required more strength than she had. She took off her boots and began to step on the dough in her bare feet, as used to be done in traditional wine-making when crushing grapes by foot in a vat. Eventually, the dough was the consistency for beginning to knead it in the 'usual' way, so she removed the cover-alls to reveal a vintage polkadot dress, feminine, yet utilitarian in shape and style. She knelt on the floor in front of the dough and kneaded with her full body weight behind her, pushing and pulling with all her might, across the floor and back again, until the huge lump of dough was the right consistency for 'sculpting' with. She began to build, blob by blob, a little structure along the wall and up in the cracks and crevices, and called her daughter in from the audience to assist. They packed the dough into the seams of the walls until there was none left. When satisfied by a job well done, Eldi bent over the bucket and washed her hands and then stood inside it and washed the dough off her feet and legs, as a homage to the countless bathing women that have been depicted in painting and sculpture the world over. She silently directed her daughter to wash her hands too, and tenderly washed the dough off her feet for her. Then they left the space together to see the other work being performed throughout the venue. The end.
(Performance running time: approx 1 hour


Curator Sadie Edginton's notes (at http://sadiesartnotes.blogspot.co.uk ) on Eldi's performance for "What Audience?" (at the Dentist, 33 Chatsworth Road, London)

"...Eldi Dundee's visually powerful performance 'Untitled' which we referred to as 'The Playdough performance' but now it seems apt to call it 'woman making dough'. It ended up being a very symbolic piece, which couldn't avoid the feminine connotations, globally feminist actions of mixing and kneeding dough, in a very physical, assertive manner.

Interestingly a local Turkish woman came by to watch and returned with a friend... The viewing from the street, with the gathering audience on the pavement created a brilliant atmosphere... The idea was not to wait for an art crowd to materialize, but to perform for its own sake, no matter how many people stopped to watch. A lot did.

Memorably a dad and two sons stopped, on the way to the new pizza restaurant. They jokingly said they could take some dough with them, to be turned into pizza, and they'd stop by later to see what she had made out of it later. Nicely, there wasn't an end product. It was dough."