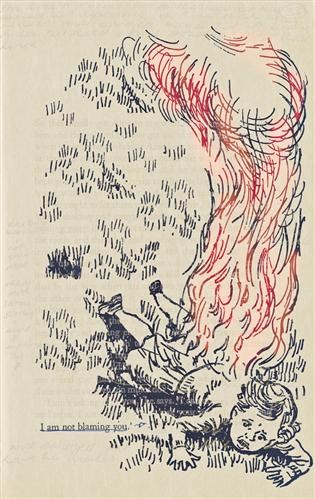 "from a distance" uses William Faulkner's novel "As I Lay Dying' as a starting point. Major originally read and annotated this text at the age of 17 and 17 years later has revisited it. The edited text is interposed with images culled from Brownie annuals.

Catherine Somzé writes:
"(...), in the series "from a distance" printed illustrations from a popular publication are put into poetical 'play' with words. Both manipulated and staged anew, "from a distance" is not only a demystifying reflection on the gender politics of youth movements and more generally of children's education - a kind of ideology-critique - it is also a poetic comment on the tradition of book annotation, that is, an intervention whereby a text is both appropriated and provided with new personal meanings."
From the Minigraph Essay "Everything is..." which accompanied Major's Solo Show at Streetlevel in Glasgow in 2008.