My Children Impersonating My Laugh 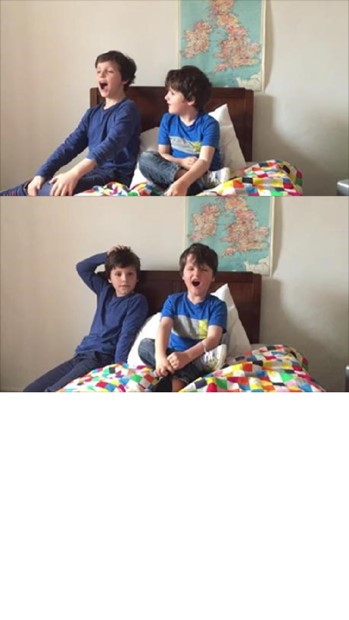 Filmed on an iphone, My Children Impersonating … are a number of short videos which depict the artist's children as they attempt to impersonate different things about him – from the way he laughs, how he tells them off when they misbehave, to what he likes to cook and eat. Like the artist , both his children are quite theatrical by nature and the acts of impersonating, ribbing and winding each other up are fundamental to their relationship and so these works have emerged directly from their daily interactions.

My Children Impersonating My Laugh is a one minute video which typifies the nature of this series of impersonations. Shot within the eldest son's bedroom, the video shows the two boys sat on the bed and looking directly at the camera. At the start, the older boy seems to be more comfortable in front of the lens, hamming up a large theatrical laugh whilst his younger brother glares uncomfortably back at the camera and performs a few perfunctory 'ha ha's. As the video continues and the momentum of the laughing swells, the dynamic changes as the youngest boy pushes and berates his brother for not allowing him to have his turn to impersonate his father and the video ends with the young boy guffawing with exaggerated vim and enthusiasm.