"These are paintings that I fully expect to see featured in glossy magazines, on walls of loft-style apartments or trendy London homes. If an interior designer hasn’t discovered Debbie Ayles’ works yet, I would be very surprised and rather disappointed.’' Rachel Sloane, East Anglian Daily Times 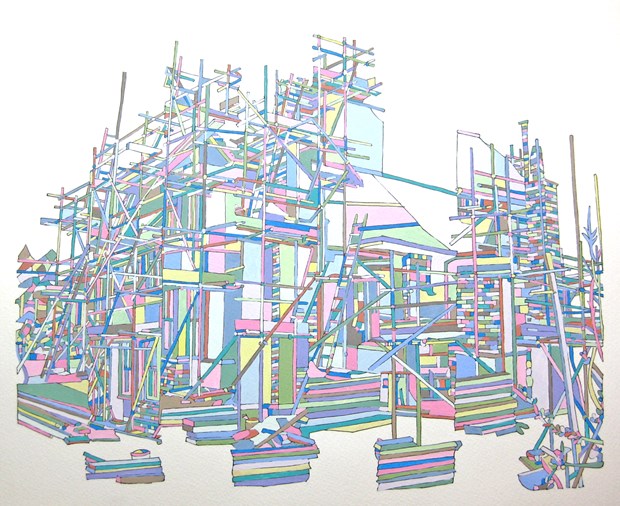 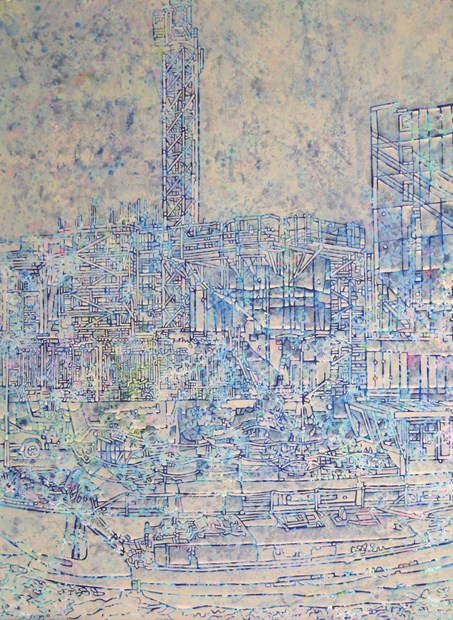 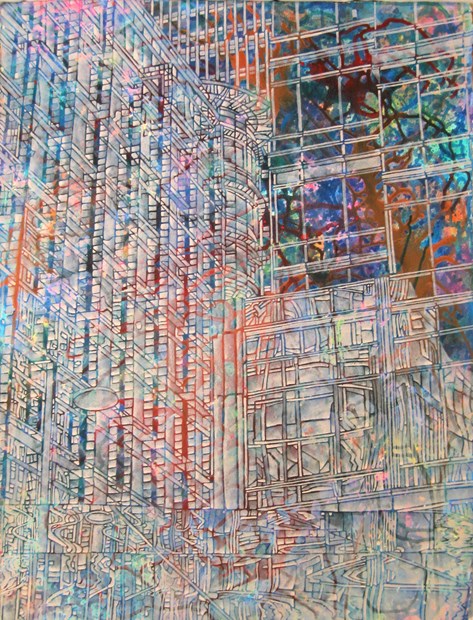 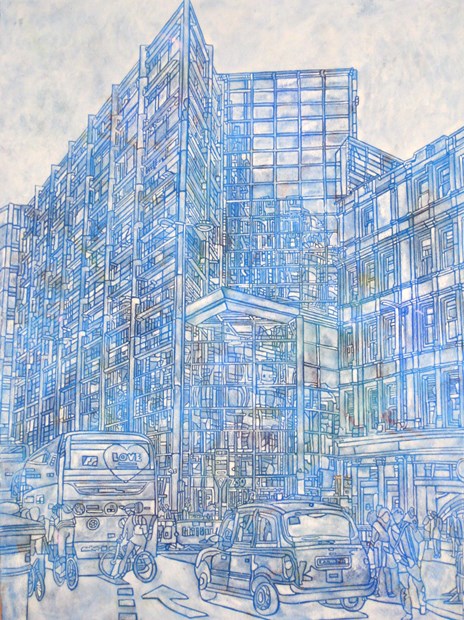 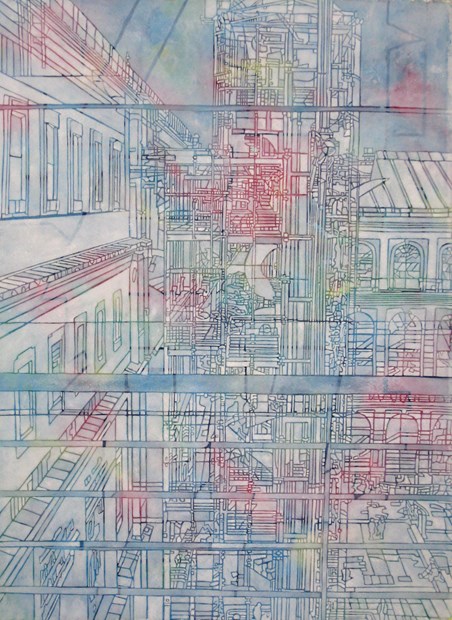 "These are paintings that I fully expect to see featured in glossy magazines, on walls of loft-style apartments or trendy London homes. If an interior designer hasn’t discovered Debbie Ayles’ works yet, I would be very surprised and rather disappointed.’' Rachel Sloane, East Anglian Daily Times

'Many buildings have architectural elements including bricks, windows, doors, chimneys, guttering and timber framing, but these features often fade into the background or become part of an overall sense of experience of a ‘building’.

Debbie Ayles examines buildings in a way that re-defines their structural integrity and uses the defining edges of the details around the object to uncover patterns that would not normally be noticed or seen, or if they are, would usually become homogenised and combined in our minds in a way that tends to fade them out.

My paintings are the result of my fascination with lines, patterns and spaces. I find architecture offers a limitless variety of opportunities to create work based on these elements. When out and about I often notice buildings hidden by scaffolding: office blocks, historical sites, buildings undergoing restoration and ‘new builds’ and find the support network of metal poles offers an increased complexity to the image. Sometimes only in place for a short while, the transitory scene is appealing as well as the fact I only glimpse it for a brief moment myself. Such discoveries have resulted in paintings where the scaffolding is an important part of the overall composition.

Some subjects lend themselves to pure linear treatments where I use solid blocks of colour underneath a painted representation of the building; in others, I create a complicated mosaic of colours solidifying the structures formed from the drawing. Often using photgraphs back in the studio they arestudied, drawings were made, shapes extricated, reflected, overlaid and manipulated to make both more complex and more simplified images and a number of paintings arecreated as a result. I am also using reflections as a way of enjoying patterning.

Recently I have tried to emphasise the temporary nature of the scaffolding by adding thin layers of paint and underdrawings that hint of another story unfolding underneath. The underdrawing is often an area selected from the main drawing, chosen to enhance or define the finished layer. This segment is then manipulated and painted on top of layers of crimson, blue, and yellow washes. The intricate mesh of the foreground is painted as a negative image in pale washes creating a misty appearance to the landscape.

I have shown at the Royal Institute of Painters in Water Colours Open Exhibition, Mall Galleries, London and the Royal Watercolour Society Contemporary Watercolour Exhibition, Bankside, London, the London Group Open and The New English Art Club Open, Norwich Castle Open Art Show and the Lynn Painter-Stainers Prize Exhibition. I have also had numerous solo exhibitions include Norwich Playhouse and Halesworth Gallery, Suffolk, My painting 'Restoration Project: Abberton' (Manwood Barn) is now part of the Eastern Contemporary Art Collection at The University Campus, Suffolk and I exhibited as part of FANN13 in Norwich: the art/architecture trail running there in October.

In 2005 I won the 'Art meets Science' category of the Daily Telegraph/Novartis Photographic awards. In 2006 I was the co-contributor for the chapter 'Sarah Raphael's Migraine with Aura as Inspiration for the Foray of Her Work into Abstraction', in 'The Neurobiology of Painting' edited by F Clifford Rose, published by Academic Press, Elsevier, San Diego, Volume 74 of the 'International Review of Neurobiology'. In 2004 Arnold Wilkins and I received a 'sciart Research and Development Award' from The Wellcome Trust to explore the relationship between pattern combinations and colour, and the visual stress they can induce. This Award culminated in an Exhibition in July 2006 at the University Gallery, University of Essex.

I have collaborated with authors and scientists in various publications such as 'L'Arte/di Giorgio de Chirico' published in Milan, 'The New York Daily Newsletter' and Journal of the Royal Society of Medicine in August 2002, The Independent and Cephalalgia 2002. I have appeared on local radio stations to talk about art as well as a BBC World Service broadcast about migraine in art.

2010    Elements: Man and the Environment, the forum, Norwich, Norfolk

2013    FANN13, Festival of Art and Architecture in Norfolk and Norwich, Norwich

2010    Elements: Man and the Environment, the forum, Norwich, Norfolk

PUBLICATIONS
2007       ‘Science’ magazine report on our sciart presentation to CambridgeUniversity
2006       ‘The Neurobiology of Painting’ published by Academic Press, Elsevier, San Diego,Volume 74 of ‘International Review of Neurobiology’ edited by F Clifford Rose - co-contributor for the chapter ‘Sarah Raphael’s Migraine with Aura as Inspiration for the Foray of Her Work into Abstraction’
2004       ‘What it is like to have a migraine: Debbie Ayles multimedia ‘Mig Installation’" Debbie Ayles, Nicola,Klaus Podoll, paper published in Confinia Cephalagia, Italy
2003       New York Arts Daily Newsletter web article published about Sarah Raphael,
2003       Paintings and research included in ‘L’Arte di Giorgio de Chirico’ written by Ubaldo Nicola and Klaus Podoll, published in Milan by Mimesisneuro-estetica
2003       ‘Kaleidoscopic hallucinations as visual aura symptom in migraine’, published in Confinia Cephalagia, Italy
2002       ‘Inspired by migraine: Sarah Raphael’s ‘Strip’ paintings’, published in the Journal of the Royal Society of  Medicine, Volume 95, Great Britain