Concepts The works on canvas are made in the studio and I also work directly from the landscape with a variety of mixed media on smaller works on paper. My paintings are begun in a loose, exploratory way using a freely drawn series of calligraphic marks, stains and shapes using a wide variety of brushes, hand, roller, scraper, sponge, etc. They are inspired by particular landscape places or events 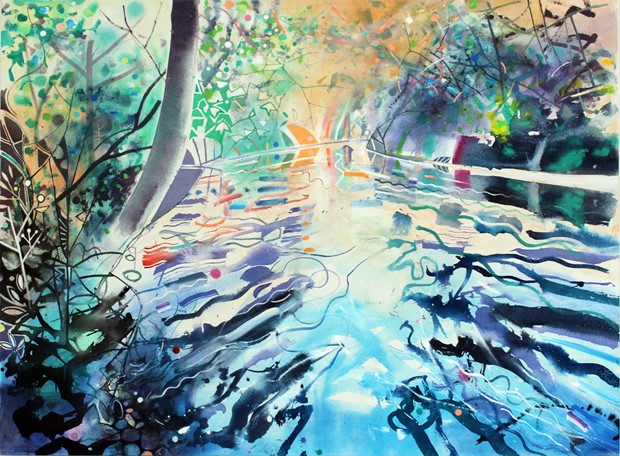 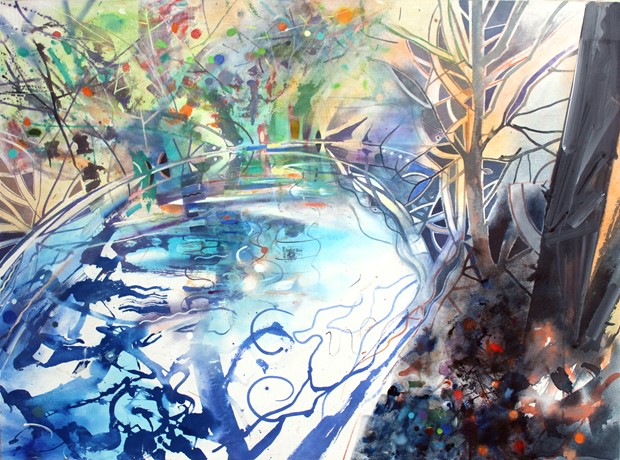 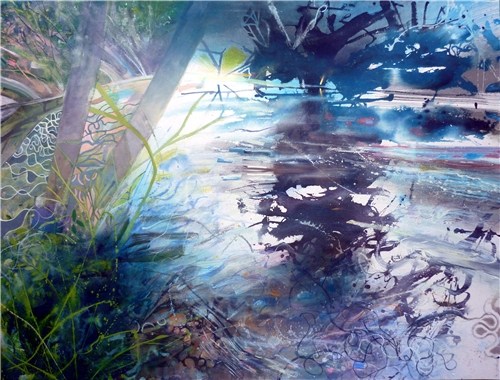 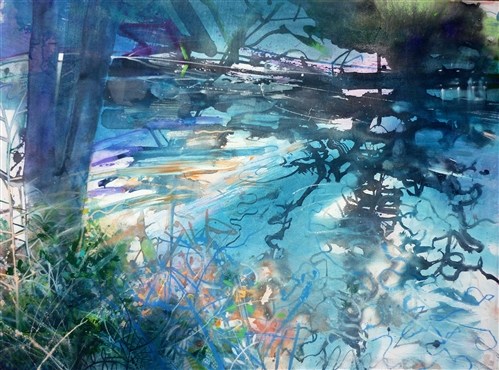 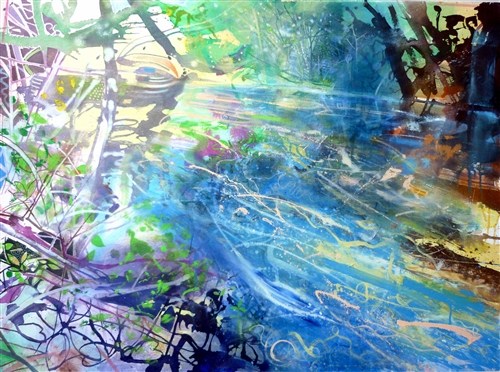 Concepts The works on canvas are made in the studio and I also work directly from the landscape with a variety of mixed media on smaller works on paper. My paintings are begun in a loose, exploratory way using a freely drawn series of calligraphic marks, stains and shapes using a wide variety of brushes, hand, roller, scraper, sponge, etc. They are inspired by particular landscape places or events using drawings, photographs and memory of these places which are always special to me. Although spending a lot of time in Devon and the south coast I am equally inspired by local rivers and parklands close to my Ealing home. I am not so interested in the topographical exotic picture postcard view but in getting close to nature where the ordinary is extraordinary. A small part of a stream and its river bank crowded with vegetation, texture, light and colour is enough for me. The final image is slowly extracted in a playful, organic way using overlaid marks and glazes to express qualities of nature such as mood, light, colour, atmosphere, space etc. I am attempting to find equivalents for the landscape in the physical qualities of paint. I want the paintings to be intriguing, tantalising and ambiguous held between the plastic qualities of the paint and all the magical illusions and evocations of the depiction of nature. The smaller works on paper are always made outside in front of the landscape and often then worked on in the studio. I work with a variety of tools and brushes outside as well as inside. I carry a large bag of rollers, sponges, scrapers, a multitude of brushes as well as lots of different media. In the studio the paintings are always started stretched on the floor so I can allow the paint to flow, spread and run into the forms of the landscape. The paint at this stage is often quite fluid and transparent. This first stage can take around an hour or so of intense activity whereas the next stages of the paintings can often take several weeks or months. After being begun on the floor the painting is then stretched onto a stretcher and painted from then on the wall. There follows a dialogue between myself , the paint, and the landscape. I try to let the paint become the landscape, rather than filling the paint into landscape shapes, in order to express a feeling of change and movement in nature. Influences Aesthetic/Formal Concerns Career path I gained a first class honours degree in 1972 at St. Martins School of Art and an M.A. at the Royal College of Art finishing in 1975. I have over 30 years experience as a painter and from 1987 onwards have also been involved with a number of large scale public art works. I have taught painting in numerous art schools across the country and have exhibited widely both as an individual and in many important selected group exhibitions. These include the New Contemporaries, John Moores , Hayward Annual, R.A. Summer Exhibition, Discerning Eye etc. My individual shows include those at the Serpentine Gallery and Peterborough City Museum. I have taken part in touring exhibitions to Germany, U.S.A., and Spain including a British Council exhibition to Aachen and tour also including Hodgkin, Auerbach, Kiff and Kossoff. I have exhibited in important curated exhibitions in this country at The Museum of Modern Art, Oxford, Kettles Yard Gallery, Cambridge and the Camden Arts Centre. I have my work in many corporate and public collections including the Arts Council, Prudential, The Bank of England, London Borough of Hammersmith, The Open University, Peterborough City Museum, Lewisham Hospital and many more. My work is represented in private collections in all parts of the world. I have completed 8 major public art works including large scale murals at Charing Cross, Frimley Park, Royal London and Ealing Hospitals and a 300 foot temporary mural covering the building site resulting from the IRA bomb in Ealing Broadway.

2005 - "Above us only sky", Tricycle Theatre Gallery, Kilburn, London

and touring to The Hague, Holland and Vicenza, Italy.