Clive Brandon is a visual artist living in the highlands of Scotland. He makes paintings, collages, photographs, books and interventions that respond to landscape, architecture and place. The environment and the everyday inform his practice, which refers to maps, relics of architecture and structures within the landscape. He distils his visual observations into subtle, small-scale works combining painting, photos, books and collaged elements of found material which evoke the immediate landscape and environment. Often using found or scavenged materials or source material, the work is shaped both by responses to the site and discoveries while exploring. This is a direct response to the idea of MERZ, formulated by Kurt Schwitters, incorporating everyday, banal material to create work that resonates with the place it's made. 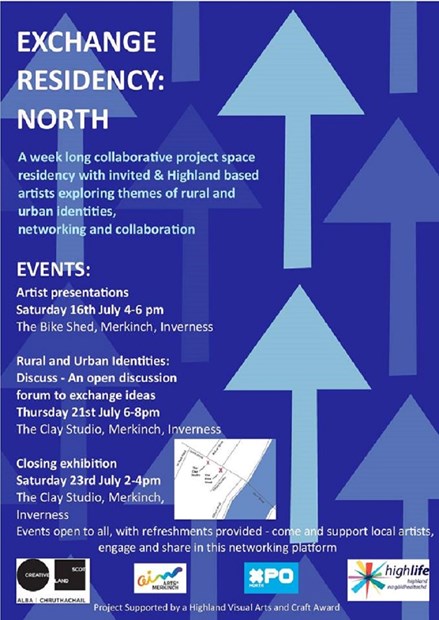 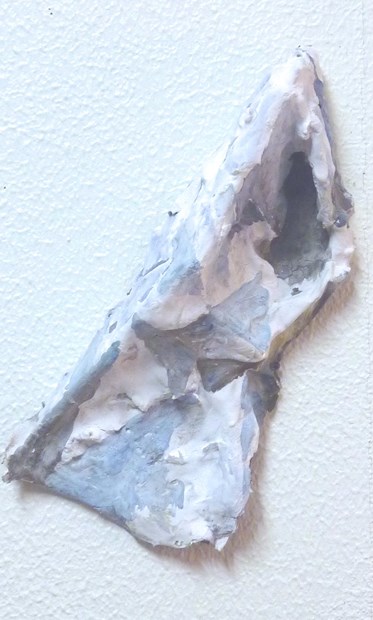 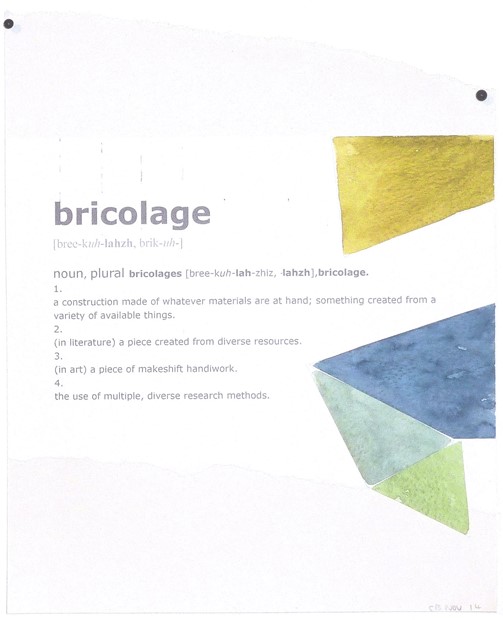 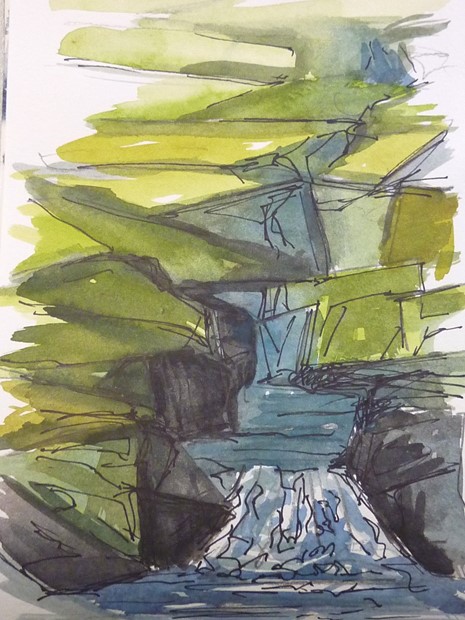 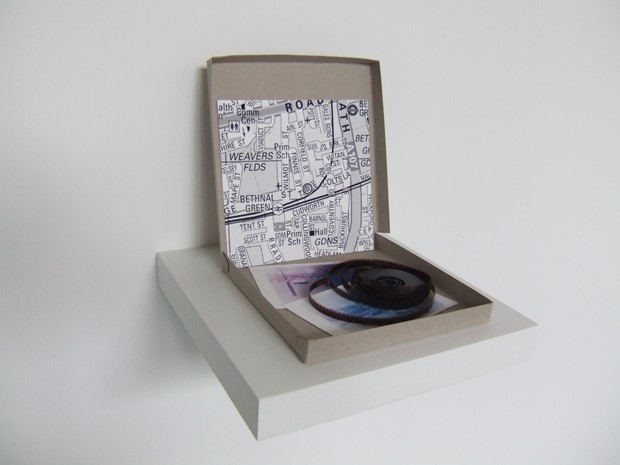 Clive Brandon is a visual artist living in the highlands of Scotland. He makes paintings, collages, photographs, books and interventions that respond to landscape, architecture and place. The environment and the everyday inform his practice, which refers to maps, relics of architecture and structures within the landscape. He distils his visual observations into subtle, small-scale works combining painting, photos, books and collaged elements of found material which evoke the immediate landscape and environment. Often using found or scavenged materials or source material, the work is shaped both by responses to the site and discoveries while exploring. This is a direct response to the idea of MERZ, formulated by Kurt Schwitters, incorporating everyday, banal material to create work that resonates with the place it's made.

Through 2013 and 2014 I embarked on a journey throughout Northern Europe, mainly Scandinavia and Scotland, where I undertook a series of residencies exploring a field of landscape work responding to travel, exploration, walking, man-made environments and the dramatic and remote landscapes of Norway, Sweden, Iceland, Shetland and Scotland. During this period I discovered threads and links with artists such as Kurt Schwitters, Joan Eardley and William Gear, through circumstantial and coincidental discovery of parallels with my own travels and interests, and this has influenced the direction of my work on the residencies. I became interested in the way that following in the footsteps of other artists who have travelled to remote locations can stimulate and provoke new ideas in the work, and also how each residency results in a very distinct body of work that is affected by the environment (light, seasons, palette, geography) and locality (history, culture, industry, artistic links) . I produced a large number of collages, paintings and works on paper during this time. This work collectively builds into a travelogue of my journey, but also each series of work has a distinct character that reflects the experience of the place it was made.

The works from the period up to 2012 were very much influenced by the changes going on around my studio in Hackney, in preparation for the Olympics, and I made a group of works that continued my exploration of the legacy of modernism and post war optimism. These constructed paintings and objects are a bricolage of psycho-geography, science fiction, high modernism, architecture and the banal brought together as paintings, collages and interventions using both found images and photos from site visits and walks by the artist. The works aim to offer a reinvention of our contemporary everyday experience of the city and its architecture, through a lens of Science fiction and the possibilities offered by re-imagining the future. Walking is employed as a methodology of traversing the city which reveals the ruins and layers of past visions of the future, particularly neglected or overlooked modernist architecture. The architectonic paintings, collages and constructed objects of this phase oscillate between past, present and future and contrast the everyday city with the utopian dreams of the past. These works could be described as glitchy, broken modernism that evokes an imaginary idyllic period.

Each of these residencies produced a body of work with a different focus, on arrival my aim was to make site responsive landscape work, which was a fairly open brief for myself.

The work in Norway was inspired by a visit to Perspectives on Collage at Photographers Gallery and Kurt Schwitters at Tate Britain just before leaving and this was significant influence both in formal and material way, and also as Schwitters left for Norway so the idea that I was following in his footstep’s emerged. So as I was making collage works, these started to incorporate direct and indirect references to Schwitters, as well as paintings made on my own explorations of the landscape.

I began making walks and excursions, making photos, sketches’ and watercolours, chance discoveries of other artists and their work, found materials and snippets of local information. I was interested in the impossibility of painting the whole landscape, breaking down the image into segments, cutting out, obscuring areas in collage. I also wanted to make ‘artists books’ as outlined in my residency proposal but was unclear how I would make a book which encapsulated my experiences. At same time as photographing Sandnes's less picturesque urban areas and thinking about the structure of the town and its development, I found a library book with old drawings and photos showing the factories which still existed as part of the town centre. The contrast between my expectations of the Norwegian landscape, and some of the unexpected industrial landscapes became another area of focus for the work.

As the work developed over the month it felt almost like various pages from books and maps which have been torn out. I began to concentrate on folded and torn edges which evoked old maps or pamphlets. Material choices were related both to constraints of residency (i.e. found materials, wood, card and what I could carry) and things that evoke the site such as paint colours, graph paper for maps/grid references, sketches, photos, wrappers and labels etc. My method of collage is cutting, tearing, over painting and juxtaposition of different images and materials that suggest both displacement and dislocation of time and place.

The resulting work gave the feeling of being lost and trying to identify the way, but it’s not clear, bits are missing, pages from the book have already been torn out. The assembly of collages is like a set of dislocated clues. Fragments, snapshots, glimpses – you can never quite see the whole- its undefinable and you can’t pinpoint what it is. Maybe this is the experience of a visitor to Norway, or any new country.

My work in Newburgh, Fife was triggered by a small piece of lino flooring I had carried from my studio as a visual prompt or something I might use. Exploring Newburgh, I found a park with a memorial to an old lino factory that had stood there. I did some research and found some old photos of the factory. I began to use these with abstract, architectonic paintings which were inspired by structures in the surrounding landscape. On a sketching walk, I also discovered a quarry just over the brow of the hill, and this scarred landscape also became prominent in the work. I was expecting to make work about the beautiful, bucolic Scottish countryside, and instead became focused on the industrial legacy of the town and man made structures in the landscape. I also made an important piece of work using collaged images of Joan Eardley, whose work I had come across while passing through Aberdeen on route to the ferry. This link reoccurred again later in my journey when I was lucky enough to visit Joan Eardley and Lil Nelson's house and studio in Catterline.

Travelling further north to Sweden, I approached my next residency as a piece of urban 'flaneury' and used an old 1970's tourist guide picked up in a junk shop as a trigger for a set of paintings and collages which were directly related to walks I had made in the city. I further developed my interests in the notion of fragments and pages torn from books which disorient and confuse, undermining the idea of a map, which is to clarify and explain. This was related to my actual experience of walking in the city and resulted in a de-constructed psycho-geographic guidebook.

My final residency of 2013 was in Ricklundgarden in Sweden. This was in a modernist villa built by an artist and his wife in the 1940's, and it was also a museum to their work. I was working in the actual studio used by Folke Ricklund and also the other artists who came to visit, such as members of the CoBrA group, including William Gear from Fife. I became more and more aware of the fact that I was also following in the footsteps of many artists who had been inspired to travel to remote landscapes, and so consciously used this in the work with direct references to historical artists and their work. The work here was a combination of the modernist legacy of the museum, archive materials from the library and sketches of the stunning natural landscapes from the studio windows. I also ran a school workshop exploring collage while on this residency which was very successful.

I then had a period of travel before starting a residency in Hafnarborg in Iceland in September 2014. The work there was directly influenced by the landscape and its structures, and the otherworldly feelings of this far north island. I made work that evoked the ruptured, blistered and scarred volcanic landscapes using found material from tourist guides and newspapers. I began to make papier mache pieces that more and more mirrored the crumpled and rugged surfaces of the landscapes around me, and combined these with watercolour painting to make work that hovered between painting, collage and sculpture.

During my final residency at The Booth in Shetland I continued some of these ideas, but also the work became much more inspired by my proximity to the water and constantly changing light and reflections. Whereas there was a chunky solidity to the Icelandic work, the Shetland paintings and collages had a fluid and reflective quality to them, as well as a darkness that reflected the season and the atmosphere of the islands. I also became interested in the remnants of old crofts which were left like scars in the landscape.

This work collectively builds into a travelogue of my journey, but also each series of work has a distinct character that reflects the experience of the place it was made.