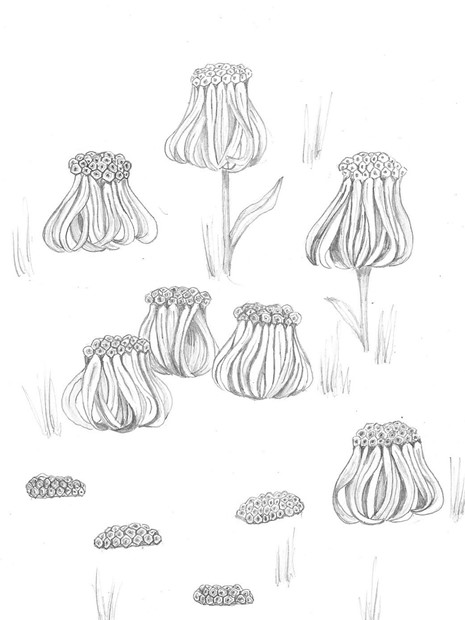 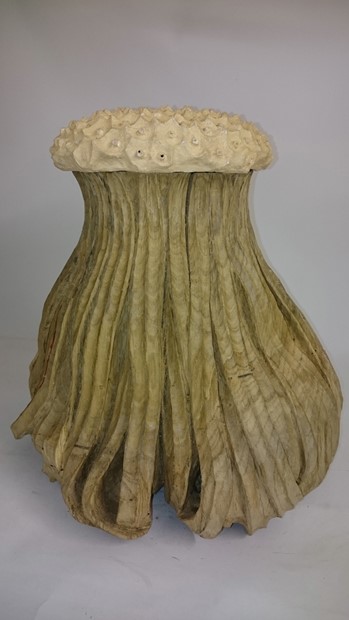 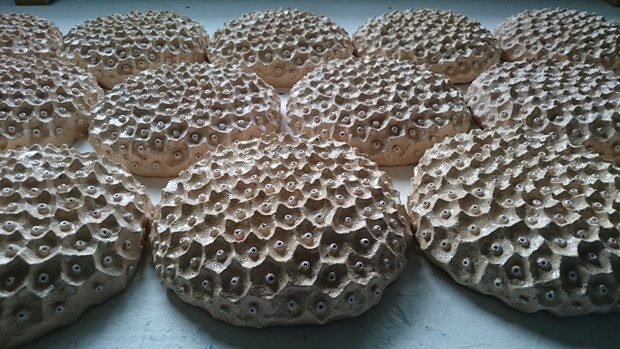 Title Daizy's Heads
Medium: pencil drawing, Winter flower heads of Aster amellus (common name Michaelmas daisy)
Dimension: 29h x 21w cm, Year 2016
The drawing above shows the flower head sitting on its sepals with the seeds long gone revealing the structure of the plant that can be seen over the winter months. The leaf-like sepals cup the flower bud and act as a form of protection as the bud grows. When the bud opens into a flower the sepals fold back on themselves making a full 180 degrees turn, hanging downwards creating a skirt of sepals around the stem of the flower. This drawing was the starting point for the sculpture titled Barrow and inspired the artwork made during the AA2A residency at Chelmsford Collage. The title Daizy is the urban spelling and means a care free, wild girl.

Title Daizy's Sepals
Medium: Wood
Dimension: 55h x 45w x 45d cmYear 2016
The spent Michaelmas daisies were carved from an oak log that was sourced locally from the Harrow Conservation Forum. The large tree had been felled because it had been infested with beetle larvae on one side, as you could see small holes covering a 5cm wide patch. As the larvae ate their way around the annual tree rings they slowly moved toward the centre if they were not removed. As artist in residency at Chelmsford College I was given full access to their sculpture and ceramic studios. I started the carving of the oak log at the collage for the sculpture Titled Barrow, but found it was best to work on it in my garden studio and really concentrate on the ceramics, while I had assess to their wonderful kins. I had a great time at the collage and produced a lot of work, which became the bases for my solo show at Space2 Gallery, Watford Museum.