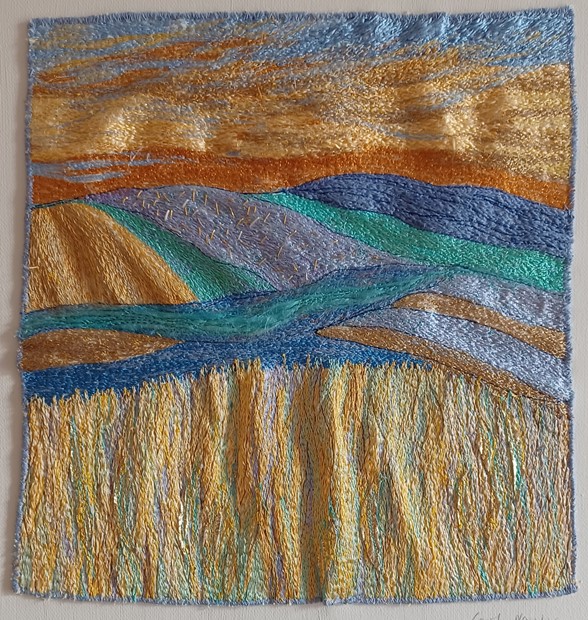 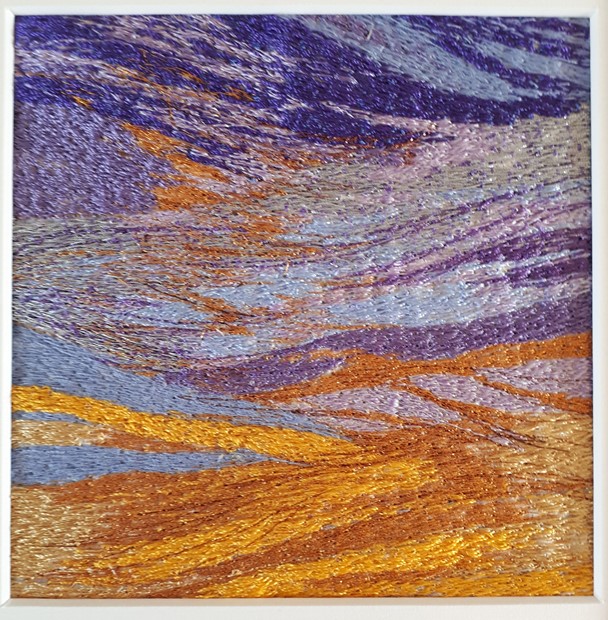 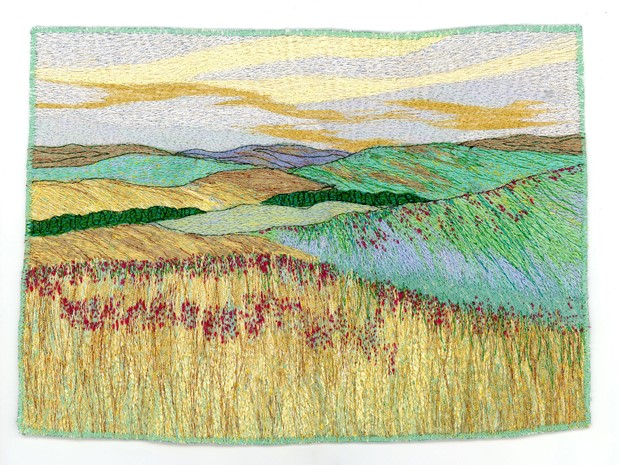 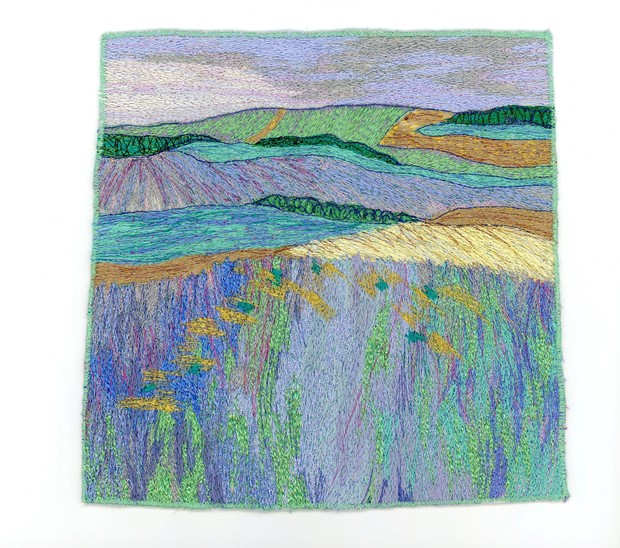 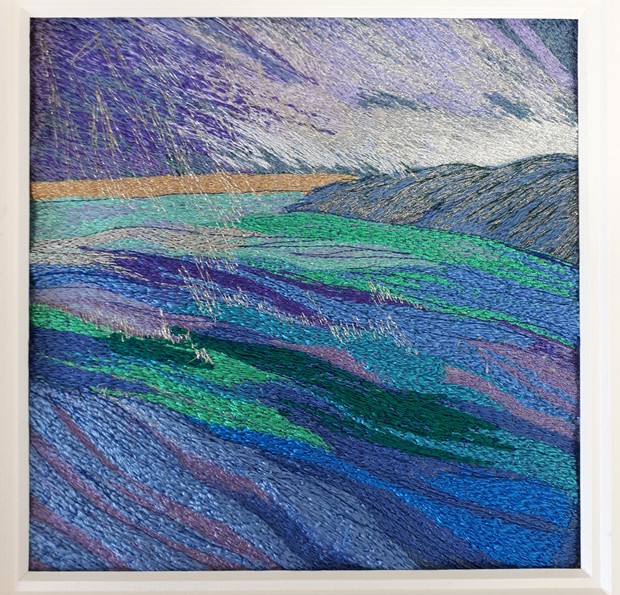 Intensive stitching changes the base fabric from a flat surface to one that moves rhythmically with its own unique quality which allows her to draw in a very direct way. The sewing machine needle provides the marks a pencil would make, and the richly coloured threads offer a sumptuous and exciting palette.

My current body of work represents ideas and images explored during the last few years.

Boundaries, edges and borders are created by the coming together of fields and pathways, rivers and mountains, beaches, skies and waves.

These forms, along with qualities of light, pattern and colour observed on my travels provide challenges that I try to meet and resolve through thread and line. My most recent work concentrates on skyscapes and seascapes, with more abstract qualities exploresd

Recent exhibitions include a one person touring show "A Stitched Timeline" that was held in venues in London, Harrogate and Dublin in 2018 and the Sunbury Gallery 2019 and a two person show at the Oxmarket Gallery Chichester in 2017.

Other exhibitions include ArtExpo Milan, 2015. Designer Crafts at the Mall Galleries London 2014, Art in Action 2014, the New Ashgate Gallery Contemporary textiles exhibition 2013, Primavera Gallery, Cambridge, featured artist summer 2013, SOFA Santa Fe and Chicago 2011,, as well as many other galleries in the UK and Europe.

In 2013 I won a silver award in the Craft and Design Selected Awards, with Kaffe Fasset as the specialist judge in textiles.

As I manipulate and change the surface of my base fabric by stitching, the earth’s surface provides me with visual stimuli that I seek not to emulate, but to investigate. For me drawing from source and working from first hand experience are essential parts of the creative process.

I look, I record, I select, I develop. If I can’t draw then I make notes, or take photographs as back up. Sometimes I simply rely on the memory of shapes or colours observed. It can be enough to launch a series of works. I constantly revisit my sketchbooks, and one drawing can be reinterpreted in many ways.

I studied Textiles at Goldsmiths School of Art and then went into teaching. Since 1997 I have been freelance, teaching on or giving occasional workshops, lectures and courses, and undertaking residencies in schools, but my primary occupation is in making art. Exhibitions are an important source of feedback as well as a way of reaching the general public. I have also curated exhibitions for the Society of Designer Craftsmen and I have a particular interest in Art in the Healthcare environment and in Education.

Artworks have been purchased for and commissioned by different hospital collections and education authorities and by private clients. I have taught in the USA and New Zealand as a guest lecturer Purchases/commissions include St Richards Hospital Chicheser, Frimley Park Hospital, Surrey, Broomfield Hospital Chelmsford, Essex, Kent County Council and Leeds Education Authority. Other clients include GlaxoSmithKline who purchased two hangings for their European headquarters in Harlow

Work can also be viewed at Primavera, Cambridge.

I have carried out many artists residencies in primary schools. I was Artist in residence at Storrington Primary school 2008-2010