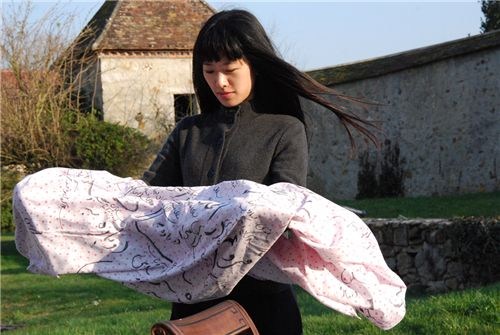 Greeting the Sun, was inspired by a poem by the Iranian feminist poet Forough Farrokhzad which reads:
I will greet the sun again,
I will greet the flocks of cows
which brought me, as presents,
the sweet smells of the field at night;...
Forough Farrokhzad
(1933-1967)
Farrokhzad's poem implies emancipation through the power of woman and nature combined and this pushed my project towards a new territory. The first line, “I will greet the sun again”, drew my attention because of the use of the word 'will' which obviously refers to something in the future. Although the poem seems to invoke the power of liberty and emancipation, this does not actually seem to occur immediately. It made me think about how the event could be brought forward to the present and how I could incorporate this into my work. Thus “greeting the sun” in the present sense manifested itself in my series of photography and performances in France.
In memory of Forough,
Women!
Greeting the sun
again,
Greeting the sun; women