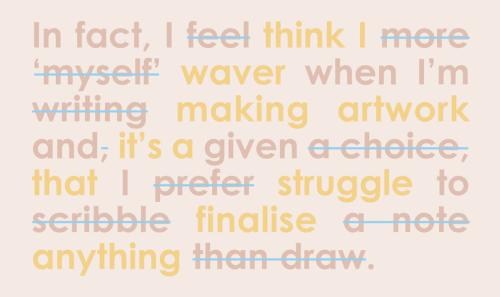 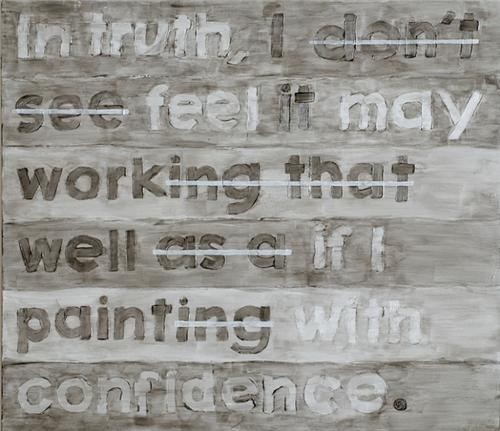 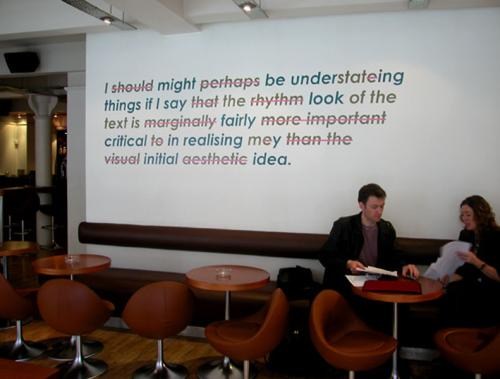 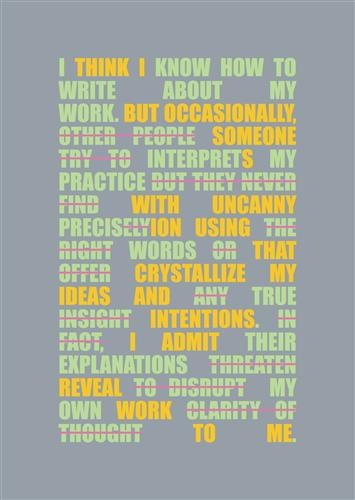 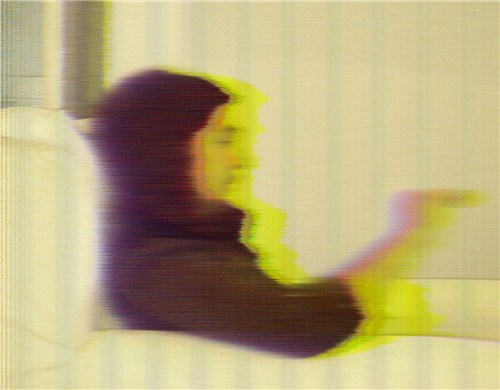 The Uncertainty Series is an ongoing body of work that mimics the 'track changes' function in word processing programs. This format allows Charnock to reveal the doubts she experiences during her art-making - giving solid form to meandering and often contradictory thoughts. An installation at Mid Pennine Gallery took the form of vinyl works spanning two walls of the gallery.

According to Prof Michael Corris (2), the Uncertainty Series is:

'the story of authority rebuked, of certainty suspended, of an internal dialogue made manifest in the world . . . In one work, viewers find the sentence: “I don't often believe my end-result is driven by my original idea.” As they stumble through strike-throughs, lose their way and retrace their steps, a conflicting sentence emerges: “I always have a clear idea that drives my practice.” . . . We read phrases that are, so to speak, false starts. We trip over ourselves, and in so doing rehearse Charnock's uncertainty.'

Charnock's paintings within the Uncertainty Series, like her current abstract work, reveal the process of their making. Again, they can be read. As Corris points out:

'One is not even certain that Charnock recognises any substantial difference between writing and painting, in the sense that the spectator receives these forms as forms that demand different kinds of engagement, different modes of address, Thoughtout her diverse practice, one senses a liberating disregard for such certainties.'

In her recent practice, Charnock investigates the essential characteristics of painting. She initiates her paintings with simple flick-of-the-wrist ink splashes or she drips ink from a pipette. In recent works, gravity is the main agent in her picture-making. There's a tension between control, spontaneity and chance.

Charnock's working method is easy to trace and the viewer becomes an active participant in unpicking her process. In other words, the viewer reads the paintings.

These works are playful and call to mind the work of Atsuko Tanaka, Ian Davenport and David Reed. On her studio wall she has pinned a quote from Ian Davenport about his own painting:

'big drips . . . absurd, quite stupid really . . . a journey from a dumb thing to somewhere else.' (from Jackson Pollock Revisited, by Anna Moszynska, Contemporary Visual Arts Vol 22.

2009 - Not At This Address, Bury Museum and Art Gallery, Bury

2005 - On the Shelf, Compartment initiative, Manchester

2002 - Atoms in the Family, International 3, Manchester 2002 - Ladies Only, Liverpool Biennial (A Foundation), Liverpool

2013 - “The Dark Would, Language Art Anthology": Edited by Philip Davenport.

I have written four novels and a novella:

A Calculated Life (2013, 47North) Shortlisted for the Philiip K. Dick Award and the Kitschies Award.

Sleeping Embers of an Ordinary Mind (2015, 47North) One of The Guardian's "Best Science Fiction and Fantasy Books of 2015"

Dreams Before the Start of Time (2017, 47North) Winner of the Arthur C. Clarke Award and shortlisted for Best Novel, British Science Fiction Association.