In Between the Folds are Particles 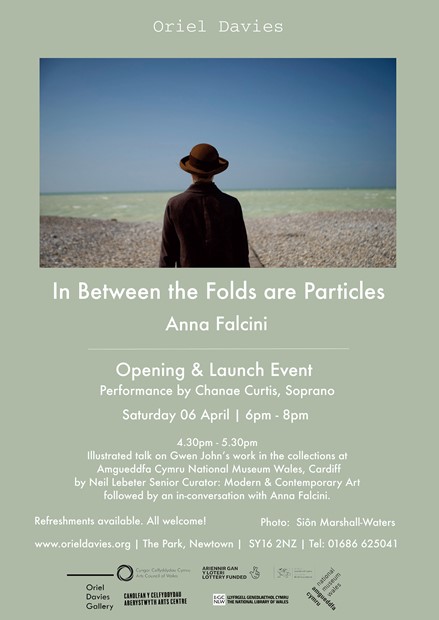 In Between the Folds are Particles reveals a conversation between contemporary artist, Anna Falcini, and the late Welsh artist, Gwen John, with 100 years between their lives. This major exhibition of original new work by Falcini brings together film, drawing, photography, sound work and object based installation borne out of five years of exploring archival material relating to John. Gwen John’s letters have, historically, been the subject of academic writing and study and so this contemporary visual art exhibition is a unique expression of their importance.

Back in 2014, Falcini began researching Gwen John’s letters and diaries held at the National Library of Wales in Aberystwyth. Bound within these archival materials, the particles of John’s life were apparent to Falcini; her vulnerabilities, passions, doubts and artistic concerns and, despite the passage of a century, her life seemed to resonate with Falcini’s own.

This year marks the 80th anniversary since Gwen John’s death. In her lifetime John was largely overshadowed by her brother Augustus John, also an artist, but her letters reveal that her life was rich and complex. A number of themes emerged from both her letters and diaries, revealing her dedication to her artistic practice, her ‘interior’ life, the continuous relationship with the sea and her relationship with Auguste Rodin.

In Falcini’s quest to unravel the episodes of John’s life, she travelled to the locations that were key places shaping John’s story; Tenby, Paris and Dieppe. Far from gaining clarity, however, Falcini became immersed into the ‘multiplicities of meanings’ that emerged from the narratives and spaces inhabited by John. John, became simultaneously absent and present, hovering like an aura, in the guise of ‘a shadow.’