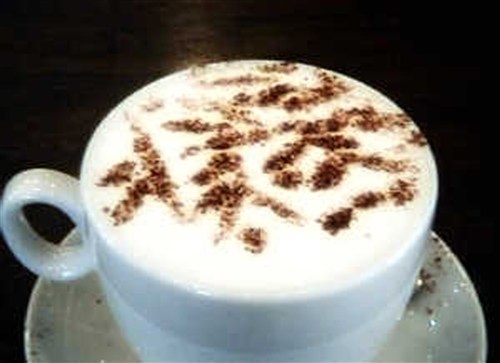 'The piece of work I have created as Artist in Residence for a Night at the Café Artistique event threads together themes that recur in my work and issues and ideas that were raised during the event, coming out of Phillip Warnell's talk and subsequent discussions. I undertook some simple interventions and a tryout of my final work on the night and am pleased to report that people attending the event were microbiologically normal and that there were no undue spikes of radioactivity (as my crackling Ukrainian Army Surplus Geiger Counter (Ebay £9.99) proved), some were also rather good at embroidery.

'Phillip spoke about his current film work “The Girl With The X-Ray Eyes” about a Russian Medical student who claims to have the power to look at patients and see any disease inside them, and his earlier work “Guest + Host = Ghost” where his swallowed a pill camera which travelled through his gut revealing his insides to the outside world.

'These issues of inside/outside seemed very important, Phillip explained his interests in “how one organism influences another and the thresholds between bodies”. This links strongly to my own work with normal flora microbiology, where I have been mapping all the bacteria, moulds and yeasts in my everyday life and re-considering my attitude to bacteria as a synonym for 'dirt'. It is a subject that is 'of no commercial or medical interest' and a way of questioning our epistemological boundaries.

'In fact the threshold between bacteria and human is almost non-existent, at the heart of each cell in our body is a mitochondrion, the part of our cell that converts food to energy, but this is (according to the endosymbiotic theory) a bacteria that formed a relationship with our eukaryotic cells at an early evolutionary stage (but still retains separate DNA). We also contain around 8 kg of bacteria in our gut which enables us to digest food.

'Much of the debate on the evening focussed on issues around medical intervention and the line where intervention can become an aggressive act. This was juxtaposed with recent news stories talking about the efficacy of placebos and the ethical issues inherent in administering such a non-treatment. This lead me to raise the issue of so called 'friendly bacteria” and it's popularity as a new self-administered treatment even though it's efficacy (as a means of producing positive change in a densely populated (with bacteria) gut) is highly questionable. In fact practically all the food we consume has a bacterial content which is neither harmful nor positive, just part of the complex eco-system that surrounds us, runs through us and finally consumes us.

'During the event it was very apparent we were in a coffee shop, the machines blasted steam, crockery clinked and there was a dusting of cocoa powder on tables. This seemed quite important.

'So threading together the issues I have discussed above I made my own intervention. I used an image of the microbial flora that I had previously cultured from some chocolate (as I mentioned no food is 'sterile') and cut a stencil through which I invited the barista to dust my cappuccino, thereby making visible the microbial flora that I was consuming. I drank it down.

'To me the artwork is the act of doing this, of culturing the microbes in the lab, of talking to the coffee shop staff, persuading them to help and to participate in the making of the work. The actual artwork only existed for moments before I destroyed it. But this video documentation of the action remains.'