I am an interdisciplinary artist and activist with a multi-disciplinary practice: a degree in Performance Art and ten years working as a Choreographer and Contemporary Dancer; followed by a degree in Creative Practice - major Fine Art and an MA in Fine Art in 2017.  My work is about embodied processes and the body rooted in the experiential training of Body-Mind Centering in the USA and Germany and many years as a practitioner of Contact Improvisation and Release. 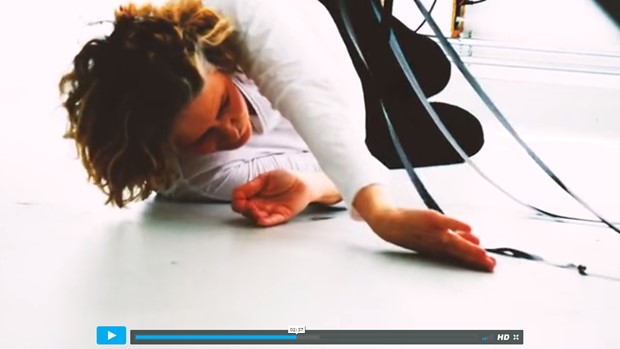 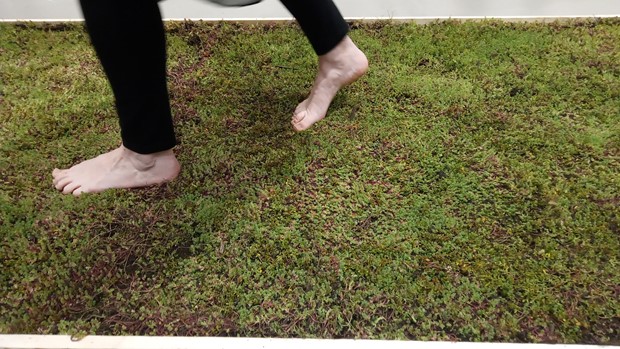 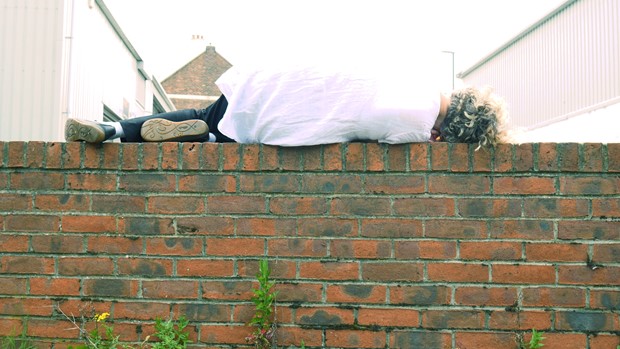 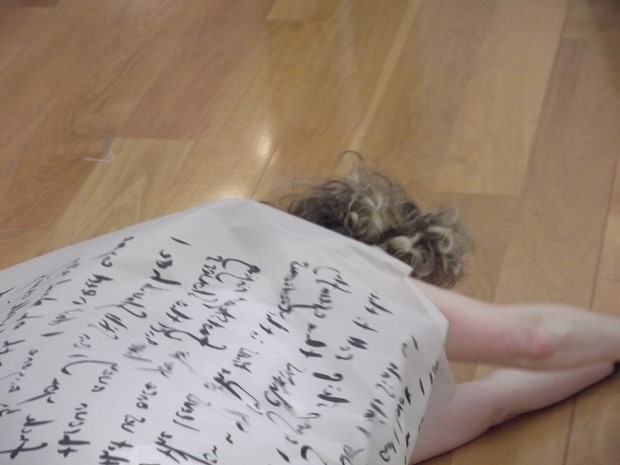 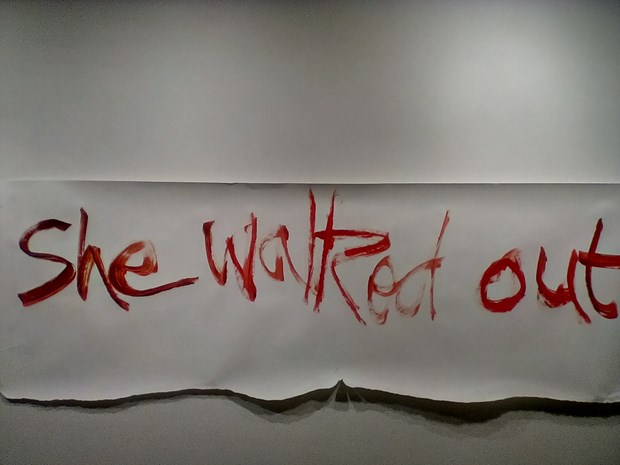 I am an interdisciplinary artist and activist with a multi-disciplinary practice: a degree in Performance Art and ten years working as a Choreographer and Contemporary Dancer; followed by a degree in Creative Practice - major Fine Art and an MA in Fine Art in 2017.  My work is about embodied processes and the body rooted in the experiential training of Body-Mind Centering in the USA and Germany and many years as a practitioner of Contact Improvisation and Release.

I am interested in how my inherently embodied practice of responding to site and mark making manifests into performance installation, drawing, text, poetry, movement, walking, spoken word, sound and video. I make work through a process of investigations using improvised movement scores arising from site specific spaces. I then translate those responses into installations and performances, often with a live audience.

Through my Walking Practice and Drawing as Text, I have combined my practice-based research on feminist theory of embodiment and the reclaiming of rural territory, through artist led workshops on the different body systems.  This includes walking in woodland environments, where writing, drawing and authentic movement responses focus on the senses and principles of Body -Mind Centering.

In my MA in Fine Art I examined Feminist Art Theories, Feminist Geography and Drawing - through art walking in urban environments, through scaled text, automatic and stream of consciousness writing, performance, video and audio works. Culminating in a body of work called 'Vein'.

I am one of the founding member of the first Artists Trade Union in England for Visual and Socially Engaged Artists: AUE- Artists Union England, Excutive member 2012-18

My socially engaged practice overlaps my own art practice, both areas of my practice reflect a lifelong focus on issues concerning social justice, identity and gender. This might include, for example, walking with others in participatory projects in rural settings as well as within urban communities, so as to discover and engage with people in small but powerful ways, through gentle conversations about their communities and lives, with responses through mark making, drawing, text, poetry and acts of collective performance poetry.

In a site specific residency for '25sg' I used Authentic Movement processes to develop improvised movement scores. This work explored my relationship to the spaces and developed material which resonated with me physically and emotionally. Out of that process, themes of the elemental, injury and nurturing emerged, resulting in three installations, part of which was video and live performance. Please see the 25sg link on my CV. My work has investigated the different body systems through the experiential training of Body-Mind Centring in the USA and Germany; particularly the Skeleton, Organ and Nervous systems. These explorations manifested into text and poetry, were embroidered onto clothes, embossed on copper sculptures, and then developed into soft white multiples of felt sculpture. In two solo exhibitions of paintings I focused on the use of improvisation through colour, gesture and mark making, using oils, acrylics and mixed media.

As a dance performance artist I have made over twenty five pieces of performance and dance theatre. My movement and dance work is influenced by the experimental movement forms of Contact Improvisation, Release and artists such as Rosemary Butcher and Pina Bausch. I have made performances for theatres, galleries, cabaret evenings, parks, poetry and women's events; often using text as part of the performance.

Feb 2021 - Started a practice based Art PhD at Univiersty of Sunderland,

April - May 2020 - Course : 'The Art of Invitation' with Encounter Art's and Northern Heartlands.

BAIT Project - 'Colour To The Grey': 11 April - 7 July 2019. Working with young people in Blyth and Bedlington to respond to the theme of Well Being and LGBT issues, using Clay, Book Making, Installation using non traditional materials; Zine and Placard making toward Blyth Carnival.

Comfrey/Baltic Project 3-19 June 2019: working with Refugees to create their own Scultpures using Re-Cycled materials, using the Ifeoma U. Anyaeji Exhibition as inspiration.

2013 - present, part-time: Creative Broker for Arts Connect, working with children and young people who want to do inclusive arts activities outside of school.

Geographies of Gender - Jan 2019. An Interdisciplinary conference on Gender, Place and Space, University of Winchester; Showing of two video's: Charles St, and Field 1.

Performance - for the closing of one day Symposium: 'The Embodied Experience of Drawing' Plymouth, 13 April 2018

'Moving on Up, Moving on Out' - Group exhibition, Feb 2017, Newbridge Project, Newcastle

February 2016 - 'Take Your Seats' - Live drawing for day of performances and installations at Shipley Art Galllery and Liz Pavey: https://www.northumbria.ac.uk/about-us/news-events/events/2016/02/take-your-seats/

2012-14  'Field' - a series of rural self portraits through video, exploring feminist theory of emodiment and the territory of the rural.

Performance - for the closing of one day Symposium: 'The Embodied Experience of Drawing' Plymouth, 13 April 2018

May 2016 - Newcastle Literary Salon, 15 min performance slot on an evening of work around the theme of Mental and Physical Health

2014 - Performance - 'Dance For Alice', at the North East Femisnist Gathering

2011 – ‘blue’, Performance Installation Residency at Highbridge studios and gallery, Newcastle upon Tyne, culminating in a - see above for blog site

2005 - Holding an Interactive performance piece, and The Watergirls, a duet with Helena Nicolao, Chiemsee, Germany

1992 Aug – Oct No Fear of Flying – Dancer and Deviser in collaboration with the Company and Director, Jeremy Warr – Dance City, Newcastle upon Tyne

1986 - Under the Surface for six dancers with live electric double bass - The Dance Theatre, Middlesex Polytechnic

1985 - Big Sea of Their Dreams:  a trio for women, inspired by The Prologue of Under Milkwood by Dylan Thomas; music -  C.S. Bach, Cello Concerto – suite no.1 G Major, Middlesex Polytechnic

1985 - Down and Out – a solo devised with workshops for 11-13 year old girls at a North London Secondary School; music – ‘Material World’ by Madonna

1985 - Mrs. Thompson in Winter – a trio for women, inspired by a poem by Charles Wilkinson, Middlesex Polytechnic

1984 - The Movement is the Meaning, The Meaning is the Movement a duet for female and male – music by Carmel, Middlesex Polytechnic

2012 - A Corporeal Heart – Including ‘Waiting II’, An evening of experimental films by 3 artists at ‘25sg’ Heaton, Newcastle

Women's Space - Newcastle - a informal safe space for women to meet fortnightly; helped to set up and facilitate from 2013

1992 – Live Theatre, Newcastle upon Tyne and for BBC 2 – 'Out of Our Heads' programme, a collaborative project with visual/performance artist Delta Streete

BAIT Project - 'Colour To The Grey': 11 April - 7 July 2019. Working with young people in Blyth and Bedlington to respond to the theme of Well Being and LGBT issues, using Clay, Book Making, Installation using non-traditional materials; Zine and Placard making toward Blyth Carnival.

Comfrey/Baltic Project 3-19 June 2019: working with Refugees to create their own Sculpture’s using Re-Cycled materials, using the Ifeoma U. Anyaeji Exhibition as inspiration.

2005 to date - Freelance Artist for the Baltic Education and Learning Team - visual art and performance workshops for under fives, families, children, including children with disabilities, autism and visual impairment; leading professional development training for teachers re how to use exhibitions as stimuli for further work with children

2008-10 Visiting Lecturer, Northumbria University, Fundamental Movement and Improvisation and the Body - both Modules

2010 – Art workshops for Brownies at a sleepover at BALTIC

2009 - Workshop leader for Northumbria University Symposium on Sustainability, Ecology     and the Moving Body

2008-8 - Haltwhistle Films – DVD called ‘Learn to Dance to Learn’- One of six dance artists on this DVD – Section on Physical Development; Movement and Dance for the Under fives for Creative Partnerships project

2007 - Visual Artist, co-facilitating the Design of a Xmas Card for

2007 - Article published by Sightlines Initiative re my workshop and practice for the national conference below called “A Tool to Liberate: the Role of Improvisation in Dance”

for Cleveland Schools, using exhibitions as a stimulus

Movement/Dance sessions with Nursery and Reception.

Taster sessions with every class, plus Training session for Teaching Staff.

‘Developing Self Expression through Dance in the Early Year

(With team of Young People Inspectors) on inspection of    Sunderland Children's Services.

Exchange from the North East to Slovakia, also inc. Greek

Cypriot young people, looking at the issue of ‘Safety’.

Keating with Under 5’s at Ashfield Nursery, Elswick, Newcastle.

1997:   INSET for North Tyneside Council Teachers:  How to Use

mothers, the unemployed, women in rehabilitation.

2010    P4C – Philosophy for Children, half day training from Newcastle University

1986-87   Anatomical Release, with Judy Sharpe, Contact Improvisation with Mary Prestidge, Tai Chi Chuan with Hettie Kothari - each one class a week for one year