Megan Dunford reports back from the Socially Engaged Art Fair.

Sally Lemsford approached me last Autumn whilst I was taking part in Bridport Open Studios - an event I wasn’t entirely comfortable featuring my work in, with work I wasn’t entirely comfortable with. She mentioned moving to the area, talked briefly about projects she had been involved with and said she would be in touch. I didn’t think much about it after that. In late June this year we re-found each other. Sally had recently relocated to Bridport and wanted to identify artists and events that would enable her practice to progress.

I was at a crossroads, feeling embedded and accepted in my professional work (I worked for Bridport Arts Centre and Dorchester Arts) but not with my practice. I was certainly in an unfamiliar place and didn’t know of an existing network in the area to support artists who considered themselves ‘socially engaged’ practitioners.

We were both treading new territory and felt like something needed to happen to bring us and others together.

This may seem like a lot of unnecessary detail but I think it’s important to give a bit of context to the Get Together day and how it came to be.

Moving forward to the morning of Tuesday 16th October. We have 25 artists, curators and producers in the room. We are in the WI hall in Bridport, there is a buzz of anticipation and we are seeing our three and a half months of planning come into effect.

The day began with a conversation between myself and Sally called ‘Why are WE doing this?’ A half performative piece to talk about the need for the event, for a network and the need to validate what we all do in it’s different shapes and sizes. Of the attendees on the day around 8 were new faces and a further 15 people expressed an interest but couldn’t attend. 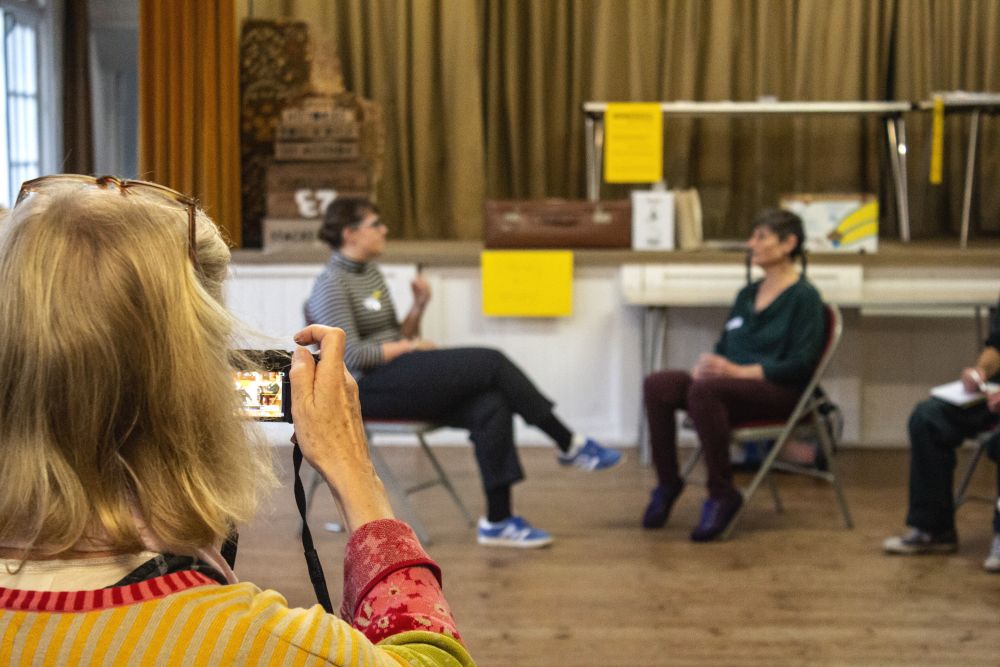 Why are WE doing this? Performative Piece - Megan Dunford & Sally Lemsford. Photo by Rachel Dunford

The performance led into ‘Why are YOU here’. People paired up and were given one minute to explain to their partner their reasons for coming, participants got together tentatively at first but after a few rotations there was a real atmosphere in the space and connections were already being made. 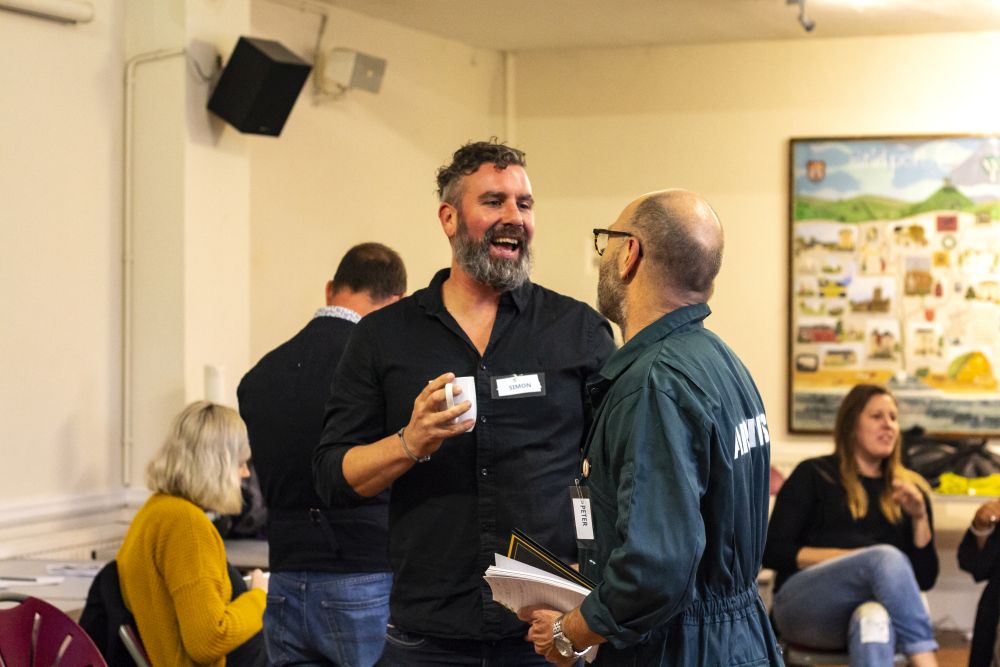 Why are YOU here? Photo by Rachel Dunford

Invited guest for the day, Anna Best followed with a Provocation entitled, 'Advantage, Instrumentalisation and Individual desire. With visual stimuli in the form of books, quotes and text'. Anna is no stranger to socially engaged practice but has moved away from it over the years. When she was invited to speak we felt her experience of this could be beneficial to those coming along. She danced around various topics, what do we mean by socially engaged - the overuse of it in a funding environment, why it’s ok not to be a socially engaged artist or move towards Asocial practice and the new use of social engagement is the wrong way.

Several elephants in the room were outed early on and there was a simultaneous movement of shoulders visually relax when participants realised it wasn’t going to be a day that put ‘art bollocks’ on a pedestal, but dealt with tangible issues that you perhaps feel like you can’t talk about to ACE or your piers. What if this work is being made to tick a box? Have I fallen into that category? Do I believe in the value of my work? How can I get others to believe in the value of it? 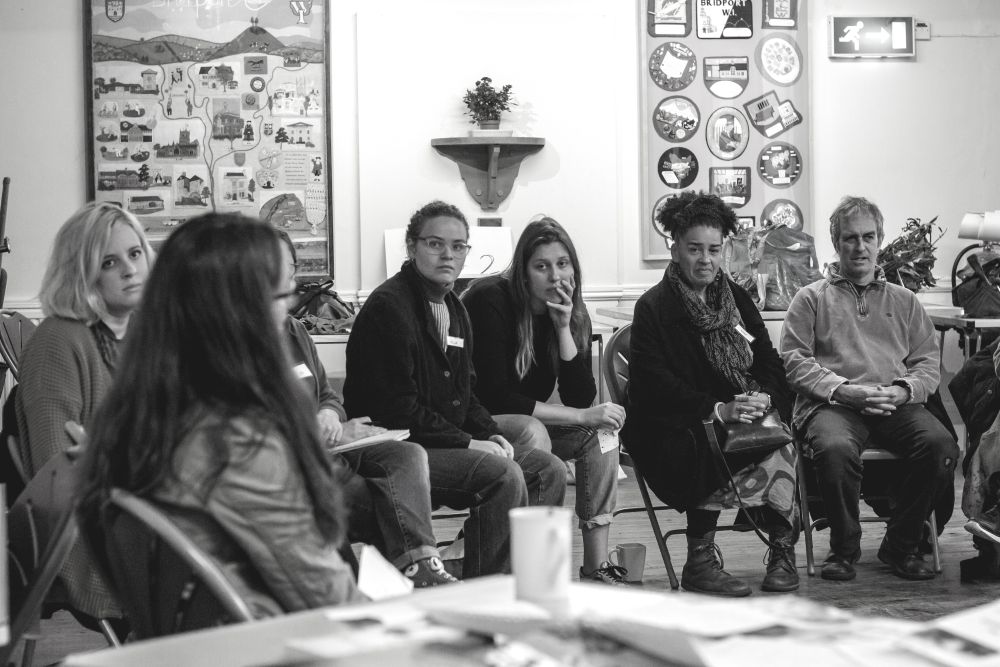 This broke out into, ‘How do YOU work’ . From the start, myself and Sally always felt the day needed to have fun, interaction and engagement at it’s core, more than just a ‘Get Together’ so we invited all attendees to prepare a stall in advance; this could be an offering, a question, an idea or invitation for collaboration.

Alongside this we prepared activities that invited participation, a ‘KITCHEN KONFESSIONAL’ and ‘MINIFESTO’; with play at their core, participants got to know each other in a freer and less formal way and both activities were digitally compiled and available to all post event. Also included was ‘Suggestions that stick’ a space for new ideas that fed into the final part of the day - a long table event.

The varied ideas that made up the stall were perhaps the most successfully and interesting part of the day. The hour enabled a space for conversation, artists meeting curators and producers, with comparison of set backs and triumphs. Stalls were questioned and dissected - some were more successful than others but everyone approached the design and concept of their ‘stall’ in a genuine and intriguing manner. 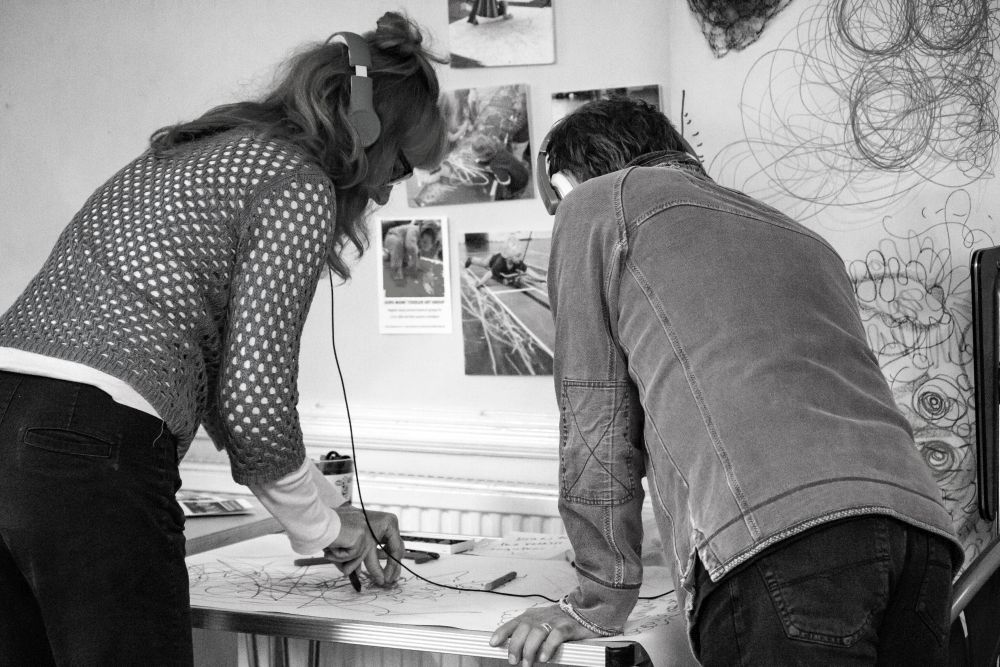 During this segment of the day, Eva Fahle-Clouts performed a 4 minute piece called ‘Brexit’ as her ‘stall’ and Sally led ‘Well do YOU feel lucky punk, do YOU? A soapbox piece that invited interaction and heckling. Each soapbox presented a number on a dice that corresponded to a point, question or idea that Sally had previously prepared. There was hesitation at the start but the room began to feel involved and question her statements and ideas, with participants calling, “Why do you think that? What do you mean by that? And at one point ‘Rubbish!’

From post event feedback it was apparent that the stall and activities section were the most useful and interesting part of the day and in hindsight we could have gestated over this for much longer - however this leading into lunch allowed for the conversation to be continued. 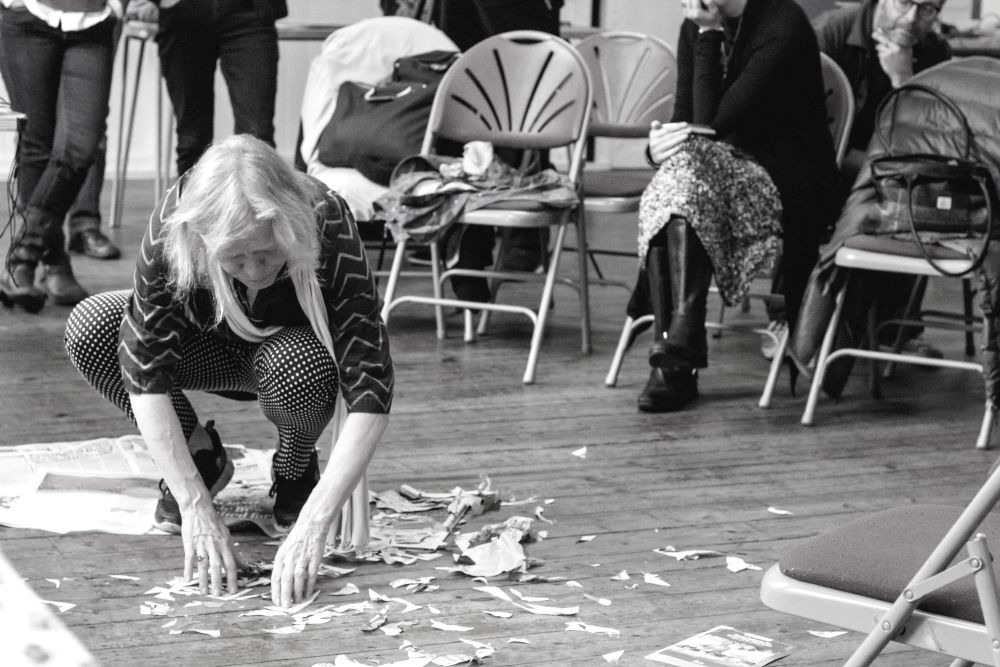 Knowing a post-lunch slump would be inevitable we followed with ‘Is this sitting well with YOU?' - a theatre game where we call statements out to a circle of people and they switch places if they feel they it applies to them - always leaving an individual in the middle who was then responsible for the next question. We were able to get a picture at this point where people’s heads were at - whether they felt part of the room and their point of view valued. 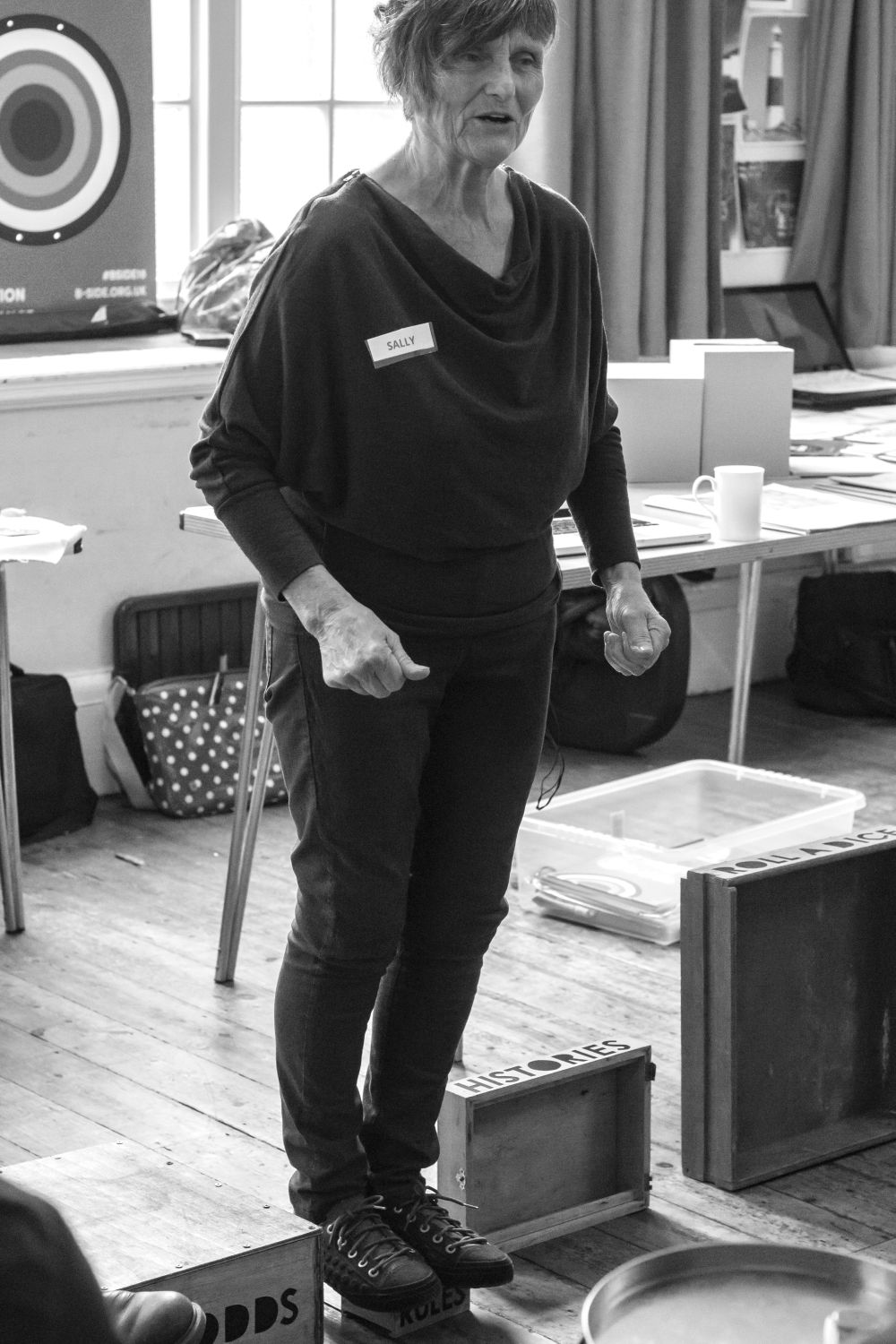 Performance, ’Well do YOU feel lucky punk, do YOU?’ Sally Lemsford. Photo by Rachel Dunford

'What do YOU want to change?' A long table debate followed allowing for open un-controlled conversation. Anna introduced the topic of education - we discussed the need for teacher support, alternative methods of education and home schooling. Allowing artists to work in and with schools in a way that is nurturing and liberating.

How we can validate alternative methods of thinking, affect change and support it in our communities as artists and arts professionals. Most people around the table found a moment or the confidence to come in and speak - it felt like a small departure from where we started the day, but it is impossible to predict any Long Table discussion - and it was where people’s head were at then, there around that table. Each participant was invited to write as and when they needed to during the discussion. 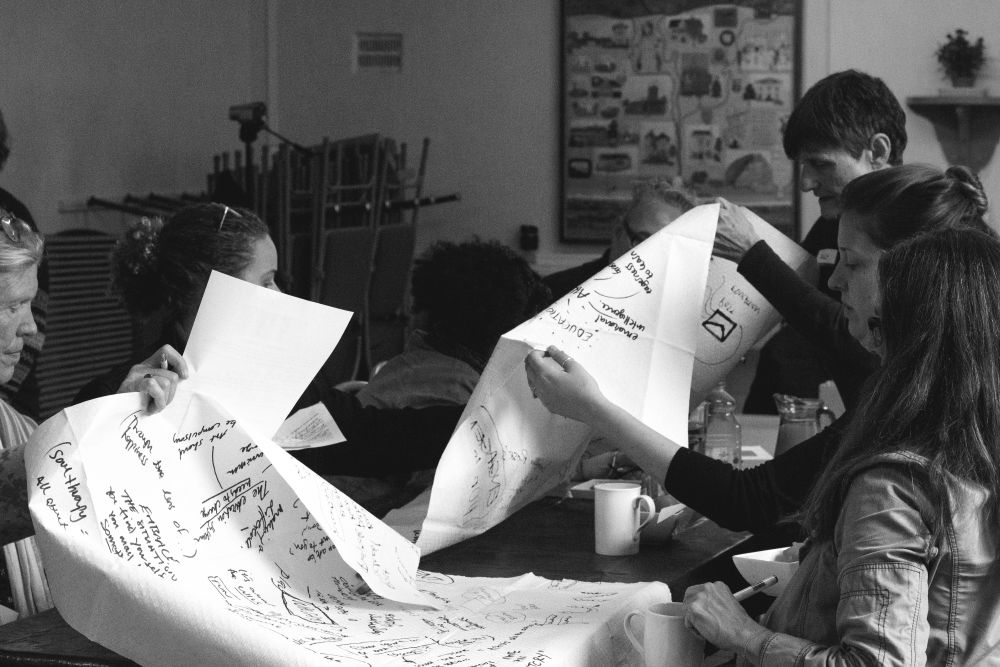 The day lead into a final vote. Each person in the room was asked to write down a tangible outcome, an idea, a suggestion, that could happen for the group to move forward. Each idea was read out and we took a vote. The top three choices are now being put into action. There has already been a group-outing to an exhibition - a valued activity for rural practitioners, and an online group set up to encourage more meet ups and ideas. 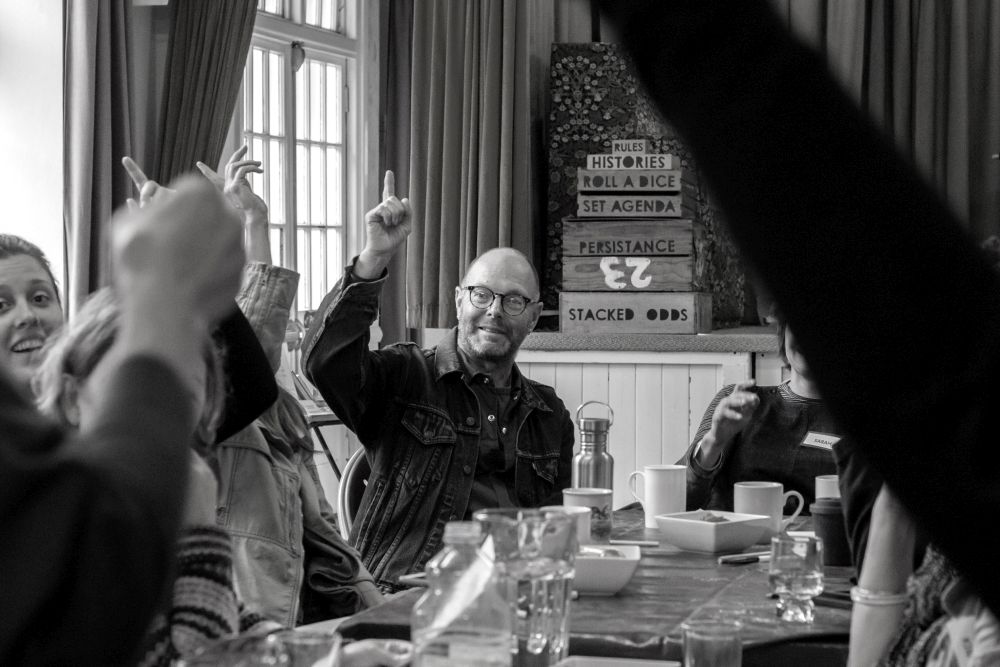 We are still to solve all the problems and challenges that arose from the day, but getting together was the first and perhaps one of the most vital steps. Something has begun and this time we don’t feel alone in starting it.