This is part 1 from a soundscape trilogy that moves through 24 hours (summarised within a few minutes). A montage of my lockdown walk experiences, sounds and observations of Nature and Natural Elements. Funded through the Arts Council Wales 'Sounds behind the Photographs' project. 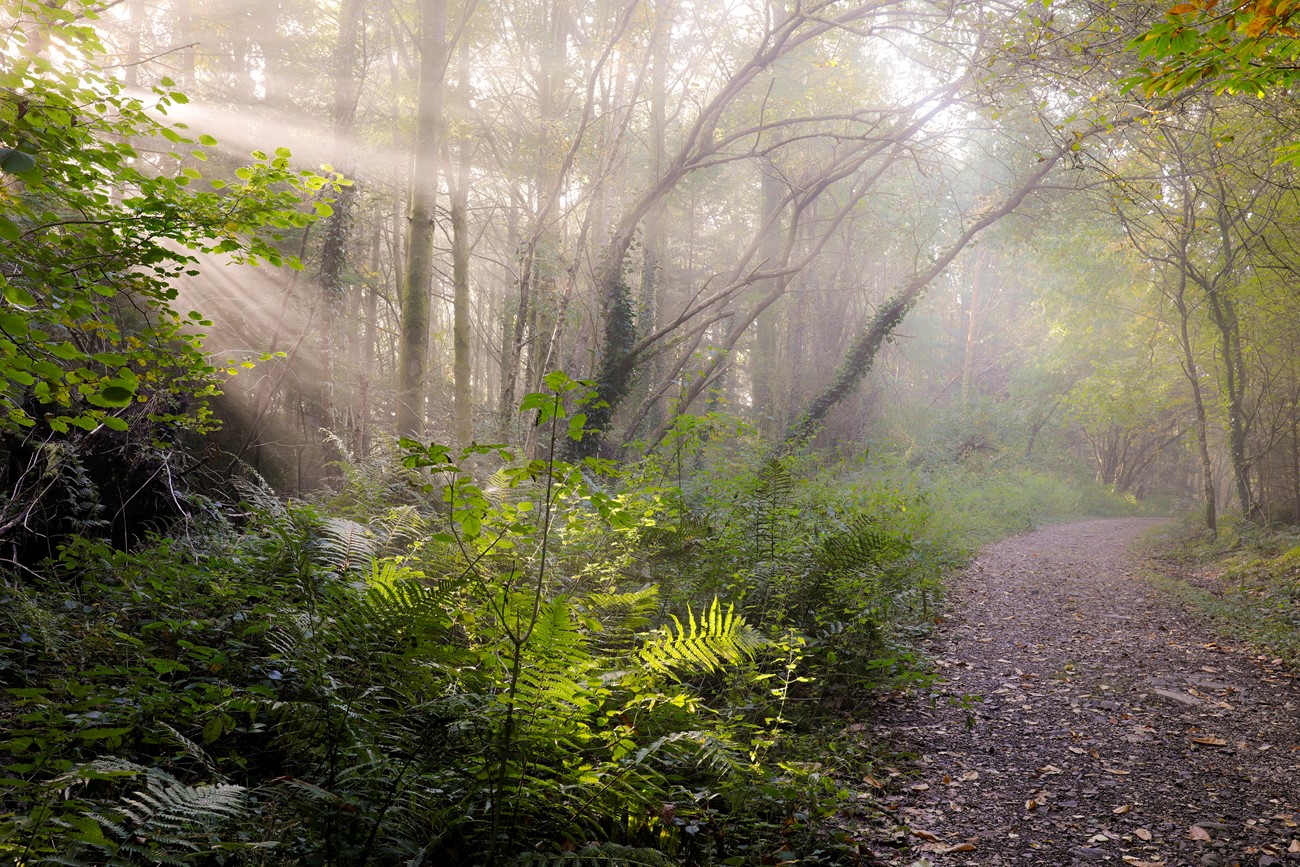 A deep map constructed as part of studying "Art & Archaeology: contemporary theory and practice" with the University of the Highlands and Islands (Orkney). Plan A. - basing the work on extensive walks in the area - had to be abandoned during the Covid-19 lockdown. Plan B. - making the work entirely in the studio - proved to be much harder than expected. The Mapping continues. Watch this space. 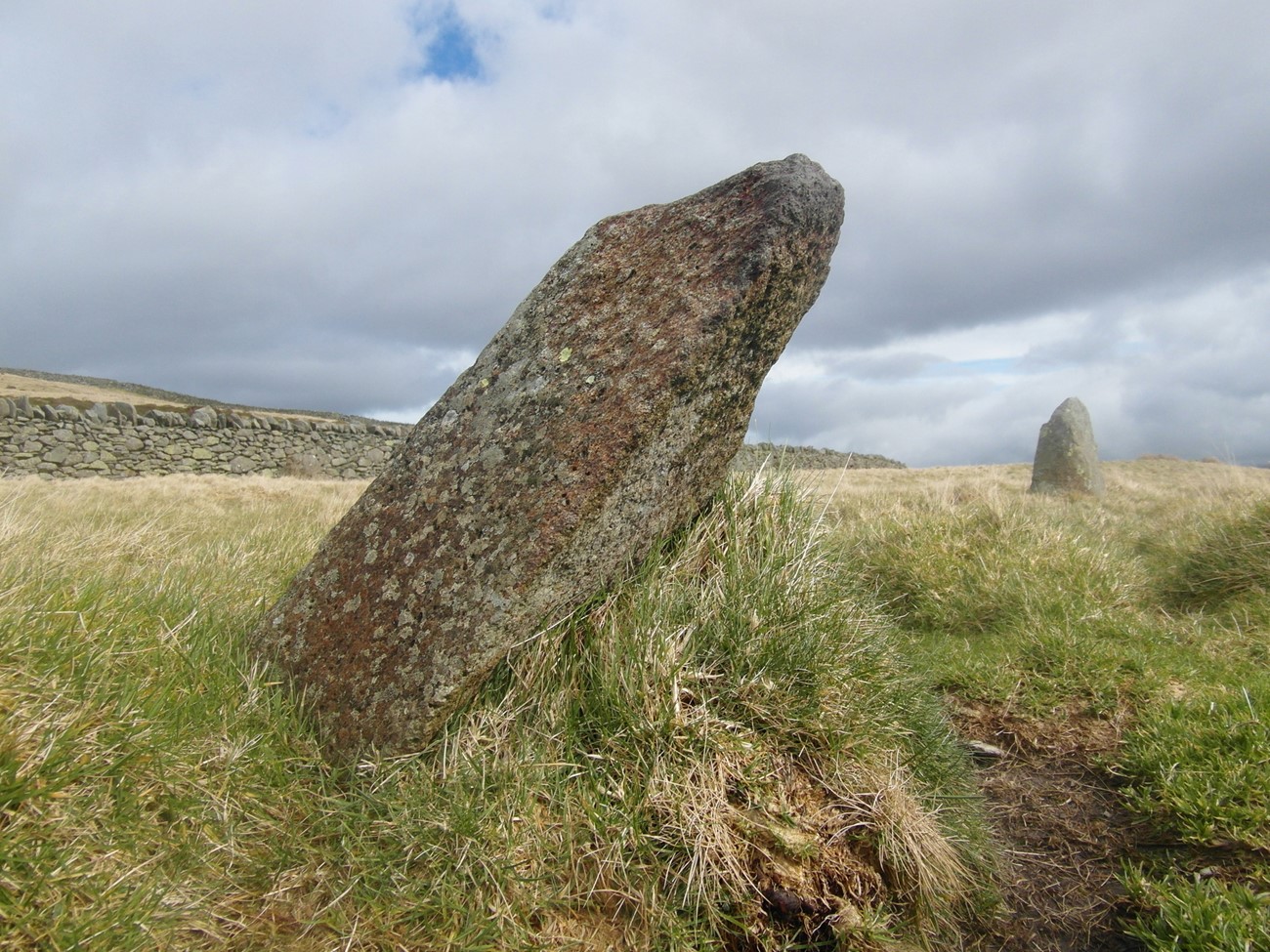 This audio work, part of my project Singing Over the Bones (2020) that also involved a live performance at Baltic 39, Newcastle Upon Tyne in 2020, was recorded in a fissure at the entrance to a limestone cave system in the North Pennines. In one of the caves, fossilised remains of a woman, cave bear, brown bear, wolf and lynx were found dating from the last Ice Age. Fissure is a spontaneous vocalisation in response to the cave environment. The whistling and low humming, also recorded onsite, were provided by Connor Mulley, my collaborator on this and other work. The recordings were made on a freezing day in February, with snow on the ground and in the fissure, an embodied connection with the Ice Age ancestors, human and earthothers. The intention was to evoke multiple temporalities, and dissolve human/other-than-human boundaries, communicating embodied experience of that environment.

Ethnographic research revealed that local people referred to a ‘spirit’ or ‘fairy’ or ‘hobthrush’ as occupying the cave. This entity traditionally helped local farmers and leadminers, completing tasks overnight. I conflated this folk being with the Palaeolithic woman’s remains found there: a primordial Mother archetype, dwelling in and manifesting through that place in ways that are appropriate to that particular moment. This present moment is one of climate and ecological crisis: she calls from the cave connecting us with the deep time of the rocks, themselves carrying fossils of long-dead, extinct beings, and the continuum of life on Earth. 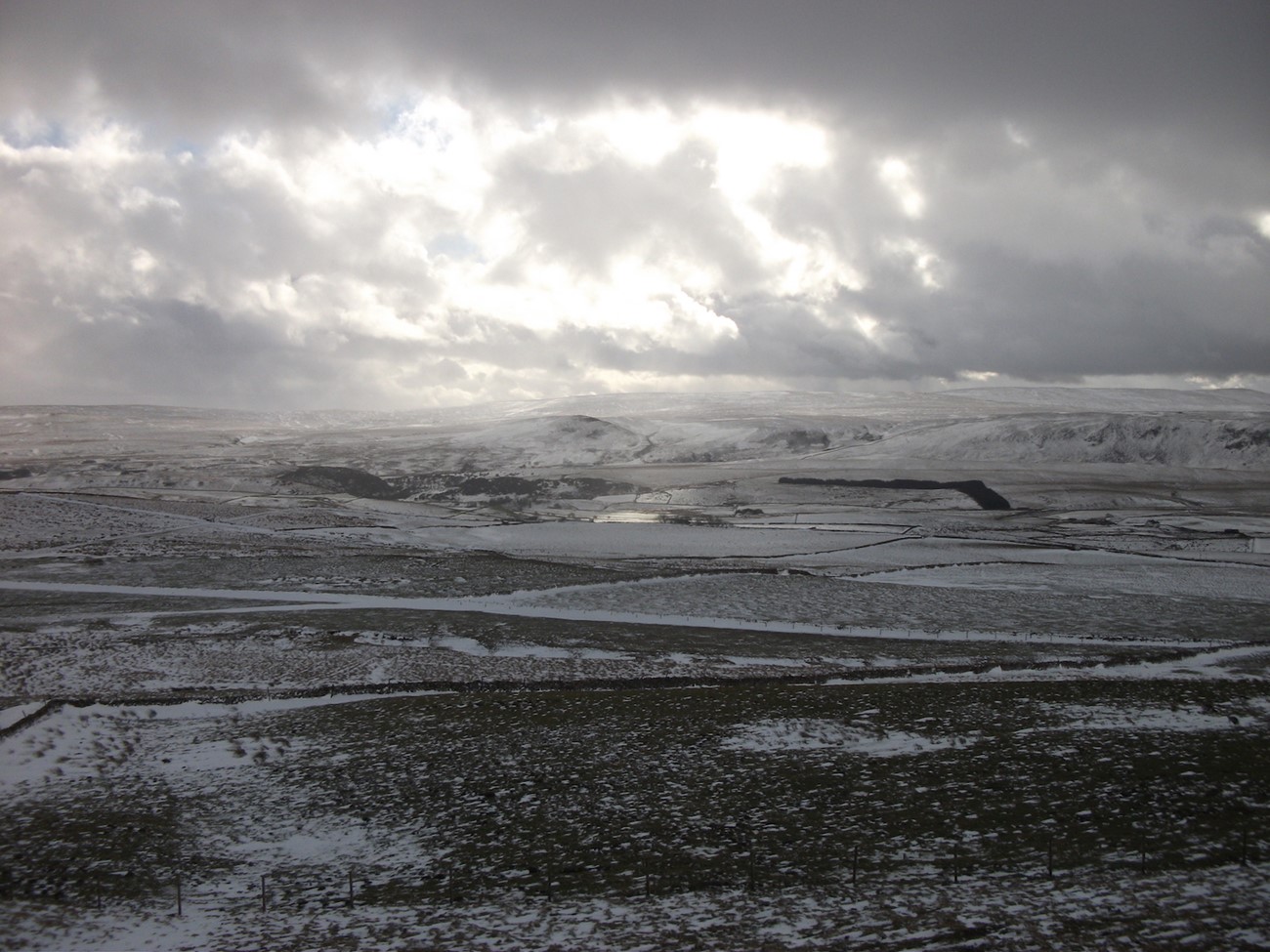 Call and Response links the landscapes of the Salisbury Plain and a vast tract of historic land in New Zealand through intertwining birdsong punctuated by a Morse code rendition of a WW1 poem. The work will be exhibited at the 2016 Salisbury International Arts Festival before touring South West England and Auckland as part of the Cicatrix International Cultural Exchange Project. 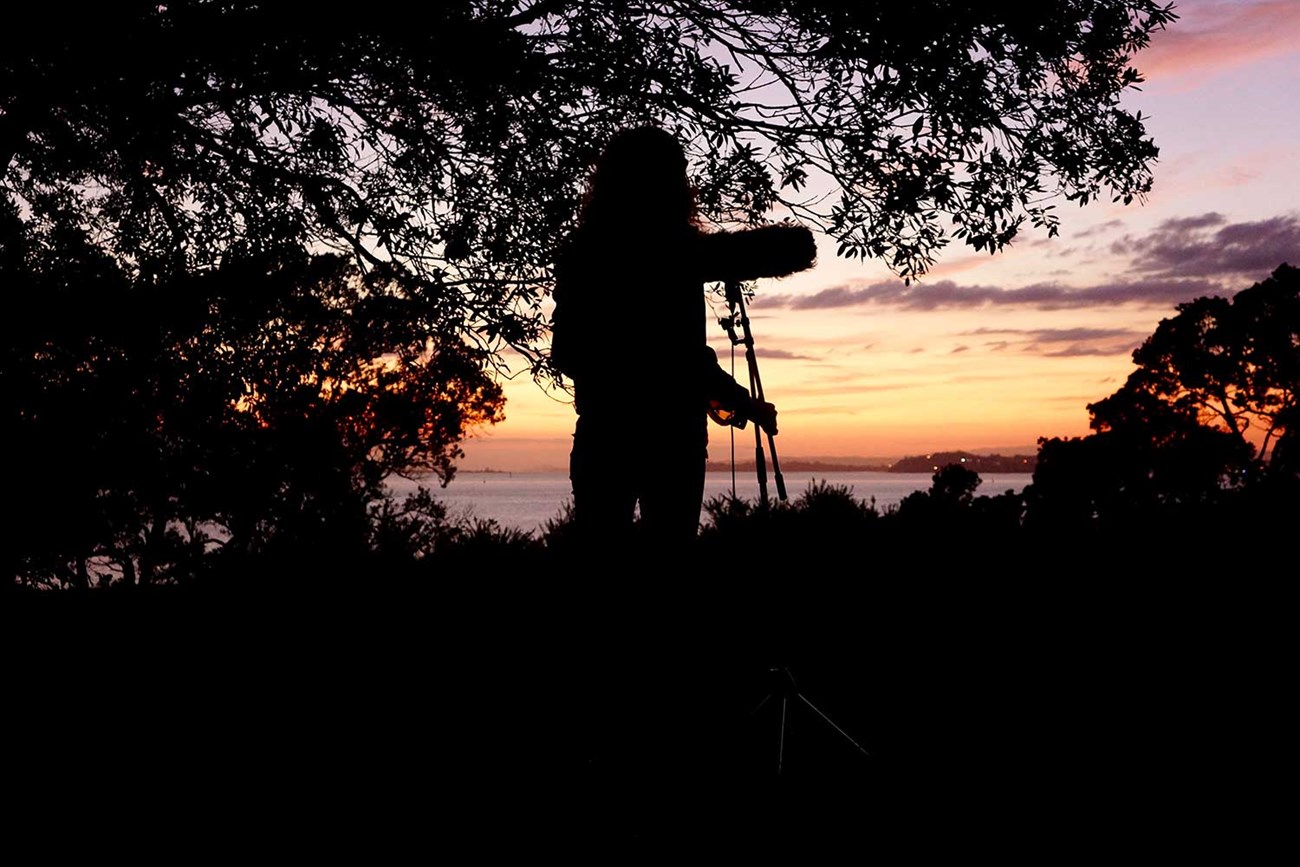 ‘An echo imprinted’ was exhibited at Wysing Arts Centre 18 October to 5 December 2021 as part of the Test Space exhibition strand, which provides a public platform for Wysing’s studio artists to test out new ideas and directions.

Bringing together work in ceramics and sound, with results from experiments in photogrammetry software, ‘An echo imprinted’ reflects on the cave as a point of origin, both culturally and spiritually.

Drawing on the physical and cyclical processes in ceramics, the installation utilises artefacts and sounds of the Wysing ceramics studio within the work, emphasising the traces of past actions that are inherent to the genesis and production of art objects. Used and worn Anagama (“cave kiln”) shelves, bearing the marks and residue of past firings frame the sculptural works, the heavy rectangular forms like tablets or tombstones. The ceramic objects within the installation also draw upon geologic and natural forms, the tactile riveted and pock marked surfaces creating wells and recesses for the pooling and crystallisation of glazes, further inferring a sense of aggregation, flux and metamorphosis.
Accompanying the installation is a sound work that gradually layers and abstracts found audio and field recordings captured over the course of 2021 to create a meditative soundscape, incorporating a variety of discovered sounds including chimes, birdsong, bells, the potter’s wheel and the voice of Foster-Jones’ daughter Olwen to capture a sense of the transcendental.

The installation draws upon Foster-Jones’ recent experiences of becoming a father himself and the loss of his own father, to contemplate how we remember, commemorate, and how fleeting memories can leave an indelible mark, or become abstracted in time. 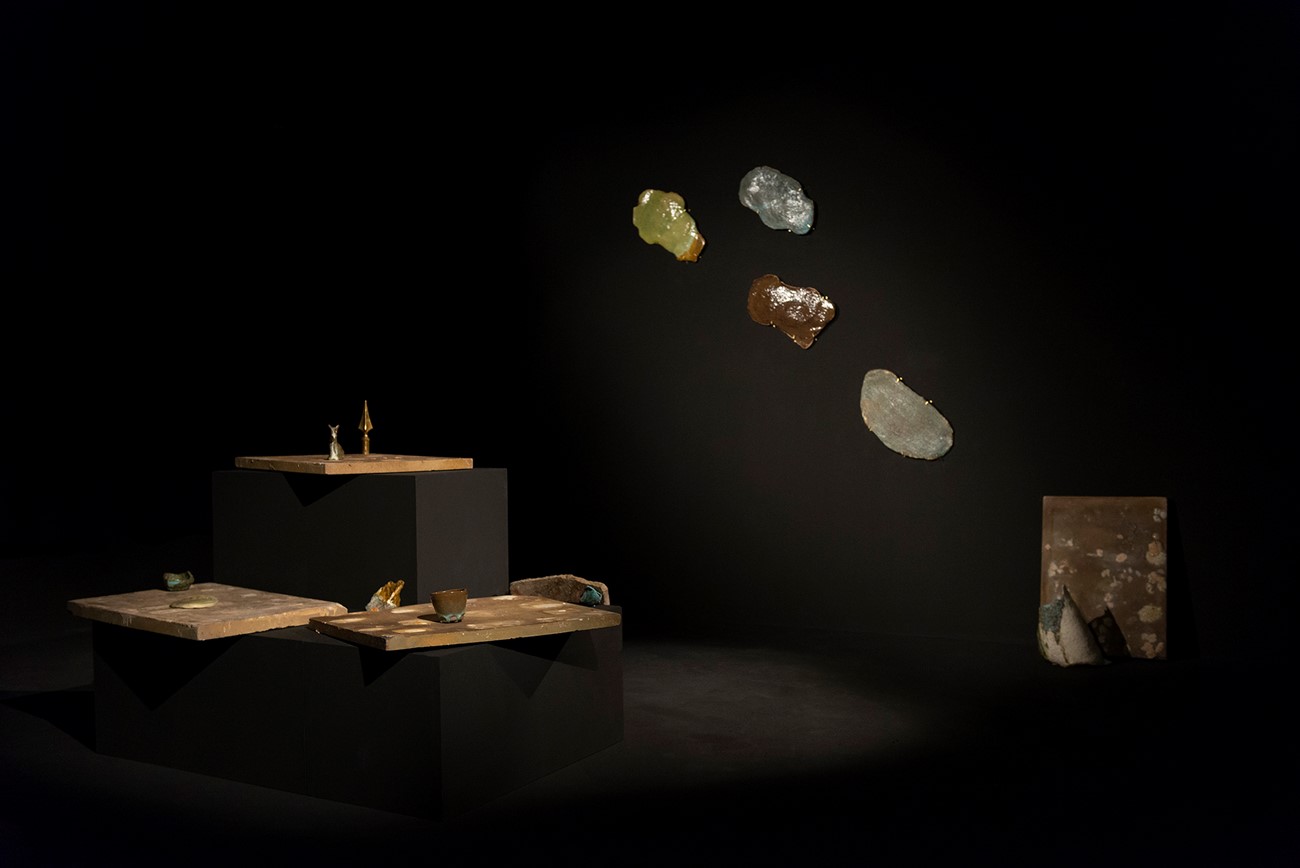