Inspired by Ro Hardaker's Micro-Commission project 'invisible, without bodies', Five2Watch this week is all about artists who have used vocal performance within their work. Featuring work by: Laura Cooper, Rebecca Glover, Kirstin Leigh, Johana Hartwig and Armindokht Shooshtari.

This Color Poem is part of a larger project and installation made up of charts, video and sculpture called Nomadic Glow. Nomadic Glow attempts to record—in a deliberately limited, schematic fashion—the elaborate naming system that Mongolian nomadic herdsman use to identify each individual horse in their herd, which is based on their nuanced perception of horse coat colors.

When visiting the Mongolian Steppe, I brought with me a range of industrial paint color chips and invited Hyesou—a local nomadic herdsman—to match the
horses in his herd through this limited selection of paint colors. The poem is the result of his selections. The voice in the video has been auto-tuned and restricted to a color scale where color tone corresponds to musical tone.

Slabs is a band of sculptures and humans. Through mimicry harmony and distortion their music defies genres and articulates a new way of listening to objects and their incredible voices.

Sculptures are activated through feedback loops and the voices of performers who engage in a form of dialogue with the sound.

'The sound bears similar surprises to the early days of free jazz. There is a continuous breakdown and discovery of melody that resembles a chain of disrupted conversations.

The confluence of rhythms coming from the continuously varying group of activators, makes the music equal parts primary and protest. Interested in ideas such as Pauline Olivero’s deep listening, Glover champions dissonance as the sound of alternative thinking. Her work belongs to the quieter forms of political action, that ask how we determine music from noise or the expected from the relevant. Where classical protest pushes away, this conversely invites-in the multitudes. If globalism had a sound, this might be it. '

The unfurling of voice in the bodily expression of gargling disorientates the identity of this language. Brandon LaBelle (2014:171) noted that the stretching of the identity through the vibration and propagation of these functions could possibly elaborate the material body through force. It is a method of activating and conjoining the acoustics of the two situations.

Singing with the Barrage, 2013

Map Sain · Singing With The Barrage

For thirty years in Iran, the authorities have almost forbidden certain performances, namely dancing and solo singing for women, along with the prohibition of some western style of singing and dancing for both genders. The issue of prohibiting a sexual gender from certain activities for thirty years and the forced silence of women were the reasons for making this work. The video is based on the direct reaction to the above issue. This work portrays the imaginary presence of an Iranian solo singer in Islamic dress in a concert hall. The video tries to portray the existence of paradoxical emotions in this moment - feelings such as anxiety, enthusiasm, fear and pleasure. 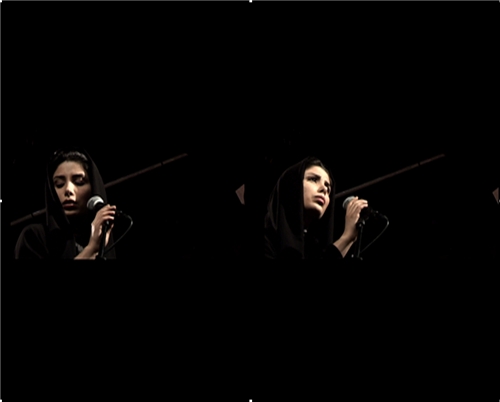