Our Artist of the Month for August 2020 is Rupi Dhillon.

Rupi Dhillon is a British Indian, multidisciplinary artist based in Birmingham, UK.

Rupi explores the relationships and connections we have with one another and the land. Through her arts practice, she investigates how multiplicity in culture is conducive to the concept of belonging and space. She is interested in facilitating discourse around race, gender and social class. Using playful techniques, her current work reimagines cultural experience through gestalt expression, participatory performance, shared practices, gifting and attachments in found objects.

She has both exhibited and completed residencies in the UK and has also been the recipient of the prestigious Gertrude Aston Bowater Bequest as well as the AIS award more recently. Rupi has both a BA Hons and is working towards an MA in Fine Art. Rupi currently works with contemporary art gallery IKON in Birmingham.

One of the most interesting things about me is that even though I was born in the UK, I actually consider myself to have dual identity. When I was 2 years old, I migrated to India and lived there for a significant time before returning to the UK for primary education. As a result, I have a UK passport and OCI certificate which allows me to travel to and from India as much as / for as long as I want, without any repercussions. It’s the next best thing I guess. However identity is more than just paperwork. I lived with my great aunt (India Wali Chachi) in Nangal Khera which is a small village in Punjab. I made some of my most cherished memories which I still hold dear today as well as life skills. Chachi taught me how to speak Punjabi (which consequently became my first language), drink from real cups as opposed to bottles, how to make roti, and milk the cattle. Languages and culture often inform my artwork due to my interest in connectivity and intersectionality. 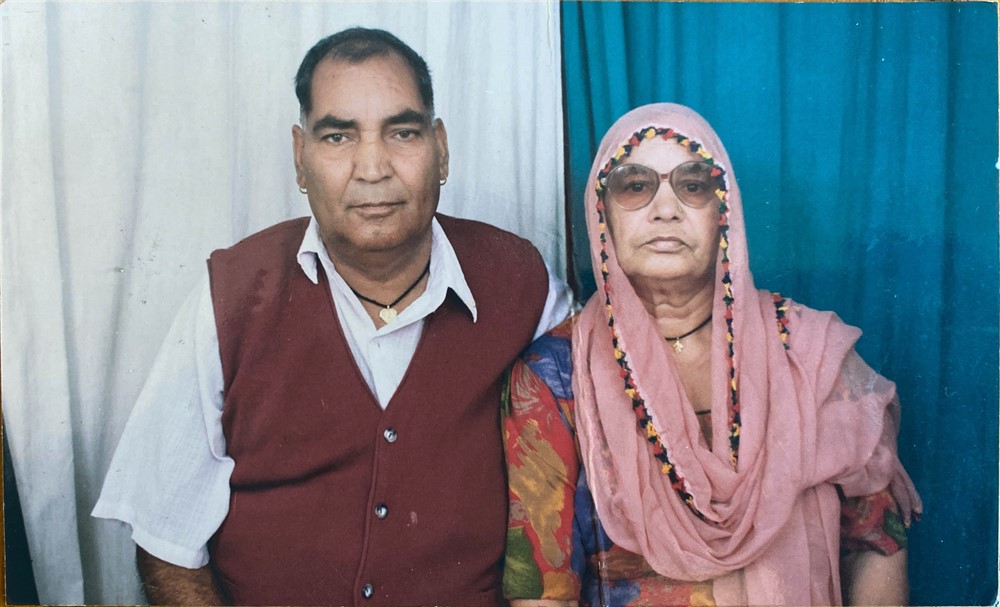 Currently I am writing a book: ‘An Encyclopaedia of Cultural Dysphoria’ in an attempt to define the term Cultural Dysphoria. This is a relatively new phenomena describing the pain and anguish associated with belonging to cultures with binary histories such as Britain for its colonial past or India for its patriarchy. Previously I wrote an essay called ‘A non-linear exploration of cultural othering and the concept of belonging within Western art institutions’ this can be read at the following link 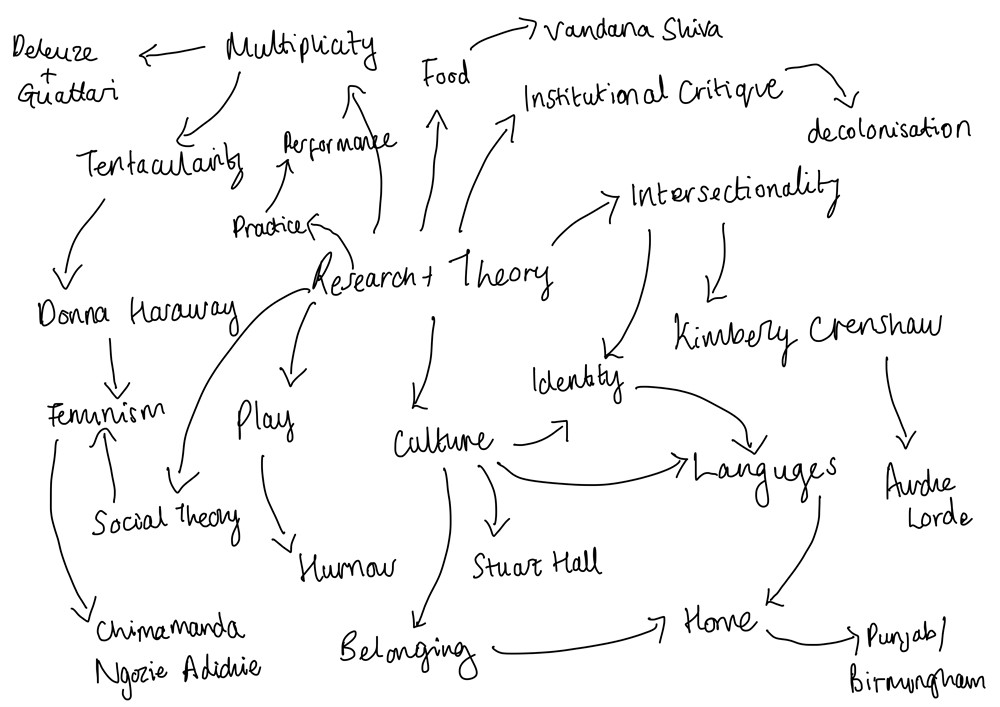 In my artwork I like to explore multiple forms of identity, relationships and opportunities for understanding and interaction, whether that is through cultural gestures, understanding the self, understanding difference and making new space and understanding altogether. I believe in using humour within my work as well as play. Understanding identity and being self reflexive can often become personally taxing, so I believe that it’s important to embrace humour and playfulness within practice. Below are two of my favourite artworks that I made which are examples of my different methodologies of practice. 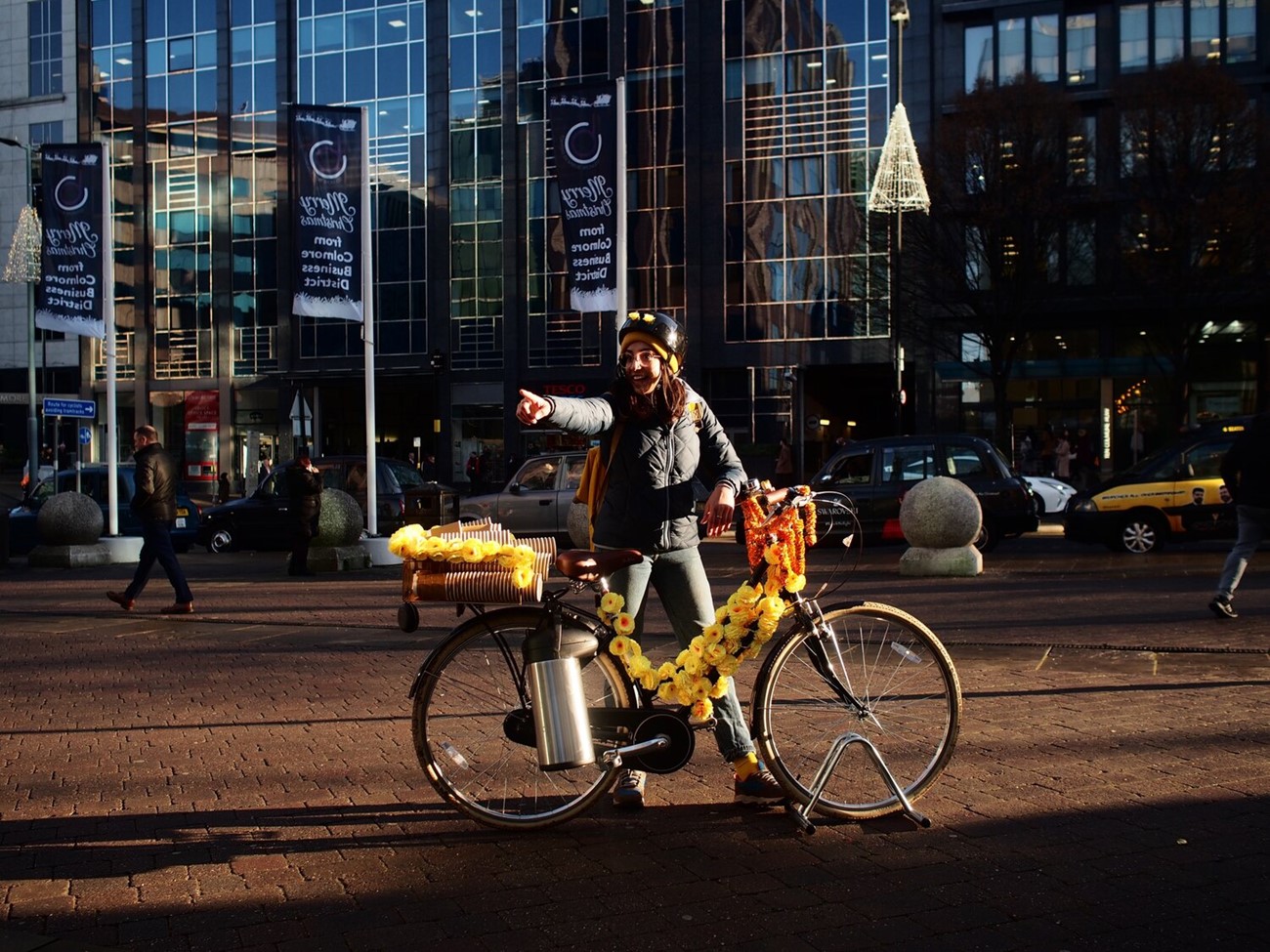 The concept of Cha Wali originates from typically male street vendors in India selling Cha (Indian tea) from bicycles. In seeing a lack of innovation in Subodh Gupta’s Three Cow’s, I felt compelled to embody in performance the role of a Cha Wala. The noun itself speaks for only males who take on this role. In the piece I wanted to not only subvert this role but to also activate spaces and conversations around cultural phenomena, specifically the act of sharing Cha with the public. The British made Pendleton bike combined with a DIY aesthetic, of silk marigolds, a statuette of Guru Nanak (duct taped to the handle bars) is typical to the aesthetic of a Cha Wala on the streets of India, yet this performance also seeks to understand the concept of gifting as all cups of Cha were given for free. Documentation shows interactions with different demographics of the public, ranging from workers of the city, students from the art school, homeless, builders and some of which recognised and connected with the act.

What I enjoyed most about the cha bike, was the opportunity to engage with so many members of the public, sharing cups of cha and chats about our daily lives and cultural backgrounds. It gave me the opportunity to express myself through an artwork which was also live and public. Engaging with conversations which I may not have had otherwise, here the cha became a bridge to understanding and connection, which is otherwise not really affordable in our society. I believe through these shared interactions we come together in difference and the transaction is through gifting, rather than capitol - in this case Cha.

The Anthropology of the Self (TAOTS) is a bricolage/ assemblage (in the Deleuzian sense) of several performances and a collection of videos of various sites with prose to form one coherent piece of work. The title of the work emerged from an investigation into shame, politicising of the body and power structures, as my specific body, that is a British Indian woman - through the period of lockdown.

Contrary to Cha Wali, TAOTS was a product of lockdown. Lacking freedom I was naturally forced me to look introspectively at my own experiences as a result of COVID-19. This had its own rewards. Cha Wali took inspiration from participating with audiences TAOTS did not have an audience to engage with in the same manner, the challenge that TAOTS provided was that of creating a participatory experience without an audience being present, encouraging the audience to embody the experiences of the artwork through their own isolation. Scenes filmed throughout the lockdown were paired with prose which explore myth, cultural histories, psychology, interpersonal relationships and identity, as well as the phenomena of COVID-19 itself. Whilst the experiences during lockdown were not always pleasant, the situation forced me to engage and challenged how I made work and the results were rewarding.

As well as making art I also am keen on facilitating workshops as a key part of my participational practice and research. I have set up workshops for youth groups, schools, mental health establishments, galleries and more recently in collaboration with The Morning Exchange and Recent Activity which is a project space in Birmingham.

The Punjabi Flatbread Workshop held in March prior to lockdown saw 10 individuals engage in an intimate workshop that taught them how to make Aloo Waleh Parathe and learn about the relationships Indian womxn have with food and cooking. 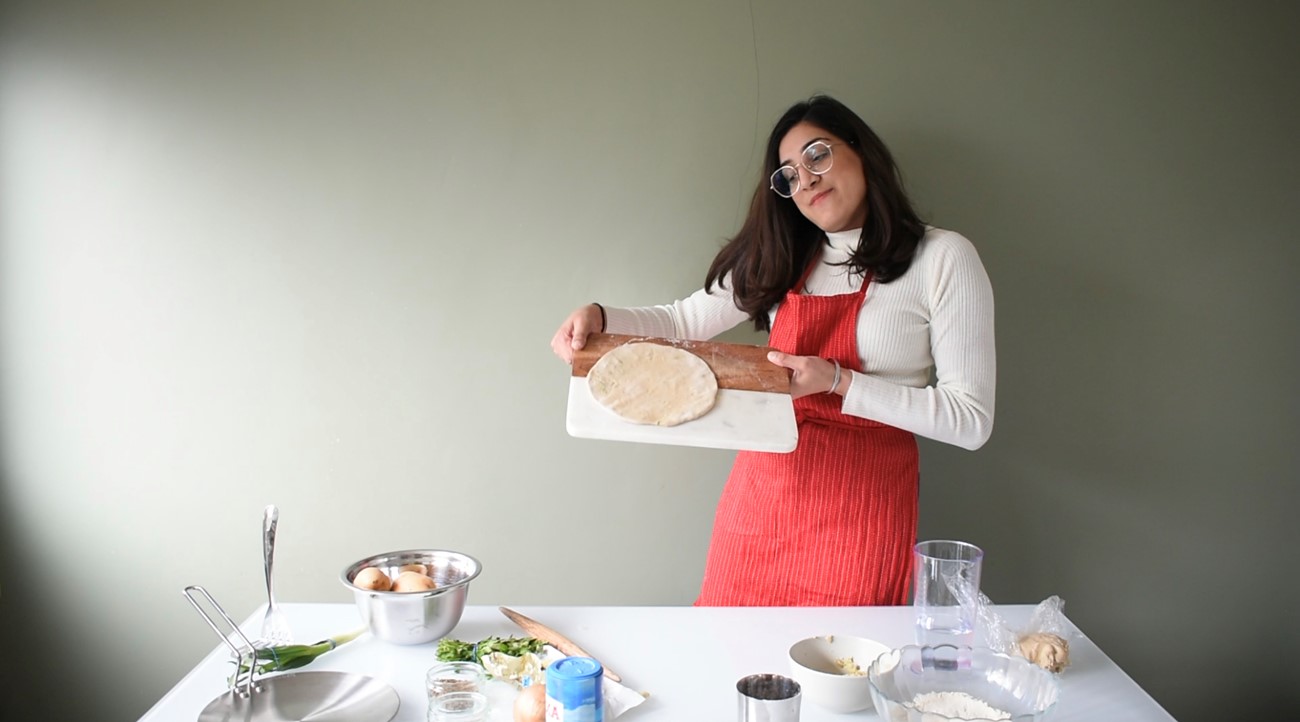 Pittu Garam was a work that arose from a conversation with artist Fred Hubble who was a close friend of mine at the time. We spoke about culture and cultural appropriation. A key idea that we both shared was the responsibility of the receiver when someone is gifting culture. It began with a present which I had gifted him, a Loon Dhani which was filled with spices and salts for cooking. Gifting as a form of cultural understanding was then born (by us at least). We spoke about how rules and boundaries are often crossed and one may counteract this with compassion, respect and empathy when receiving or learning about a culture. As a result I gifted Fred the game of Pittu Garam and this resulted in both an artwork, show and publication, with hopes to continue more research in the future. 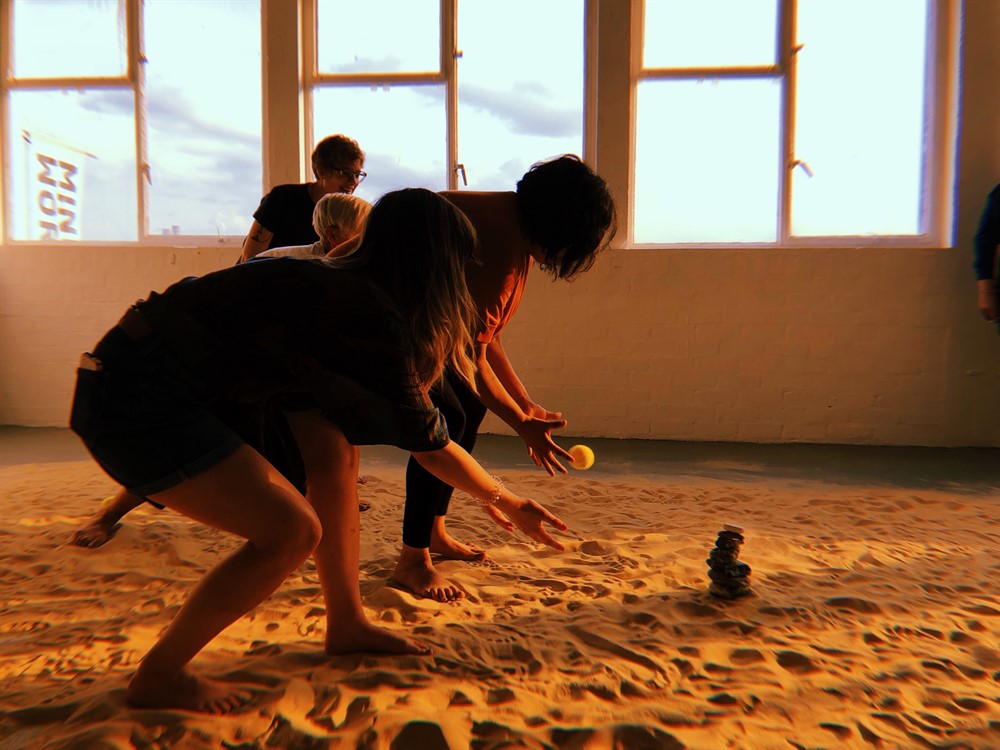 The first collaborative show between artists; Rupi Dhillon and @fredhubble, titled Pittu Garam the show held at Stryx Gallery in August 2019 reflected on a performance made in Aarhus, Denmark. The show included a participatory artwork that invited viewers to play Pittu, a game played by children in South Asia. The exhibition sought to investigate the notion of cultural gifting, difference, multiplicitous relationships, consent and understanding.

The night also saw the launch of a joint publication, with translations of stories of play from writers of different cultures, as well as an evening of Indian sweets. 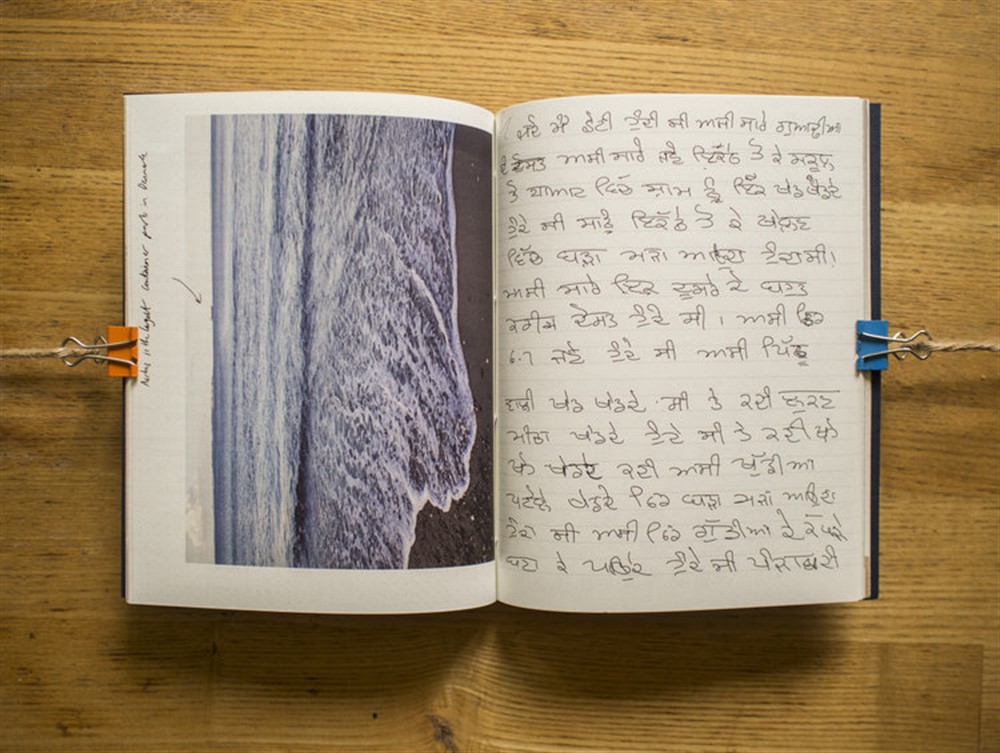 As my MA is drawing to a close while were still in lockdown, I am facing a virtual show and have pretty much completed 2/3 of my degree within the confines of the lockdown. I’m apprehensive about what this means but equally understand the importance of embracing alternatives and adapting. As an early career artist in precarious times, one cannot help but wonder what the future may hold.

In an effort to remain connected to the physical world and the environment, I am undertaking a residency at JOYA Arte y Ecologia (Sierra Maria, Spain) in October this year. On this residency I aim create work with the local clay in Los Gázquez, creating limestone cups, bowls and water holders similar to those used in Nangal Khera, where I grew up.

This would be my initial line of inquiry as I hope to understand the implications of water shortages in specific climates and cultures and the ways in which communities worked together to make the most of both the land and its gifts. Growing up in Punjab, the village had one large water tank which would serve the entire village. I often think back to the Balti Baths we used to have which consisted of giant buckets of water, and a squat like position on the ground while washing. What interests me specifically about Joya is the relationship to water supplies and the systems it uses to conserve water. I hope to investigate this further on my residency and pay homage to the village in which I grew up as well as connecting with Los Gázquez. My practice is often inspired by what connects us and what separates us as human beings, I reflect on Donna Haraway’s theories of “Making Kin” and “Staying with the trouble”, by this I mean, building meaningful connections and lines and trajectories of relationships, and to do so by allowing ourselves to work through the difficulties, to come together through differences and therefore share/learn through compassion and understanding.

I hope that many of you reading this can follow my journey moving forward and see how we embrace the ever-changing new, remote art world. Please keep in touch and follow my Instagram @rupidh