Our Artist of the Month for June 2020 is Quilla Constance.
We talk to Quilla about her practice and her ‘Teasing out Contingencies’ project with Tate Exchange.

My name is Quilla Constance (abbreviated QC) and I’m an interdisciplinary artist of (Black) Jamaican and (White) British heritage. I deploy my practice across the media of paintings, costumes, photographs, live performances and music videos, staging these artworks across varied contexts, such as: art galleries, lecture halls, theatrical venues, music clubs, social media, and the street. My practice seeks to conflate and strategically activate the intersections between these cultural zones/learned categories, to agitate and surprise audiences – ultimately highlighting the absurdity of hegemonic systems of categorisation which are often injurious, since they restrict and marginalise BAME, LGBT, female and working-class identities. 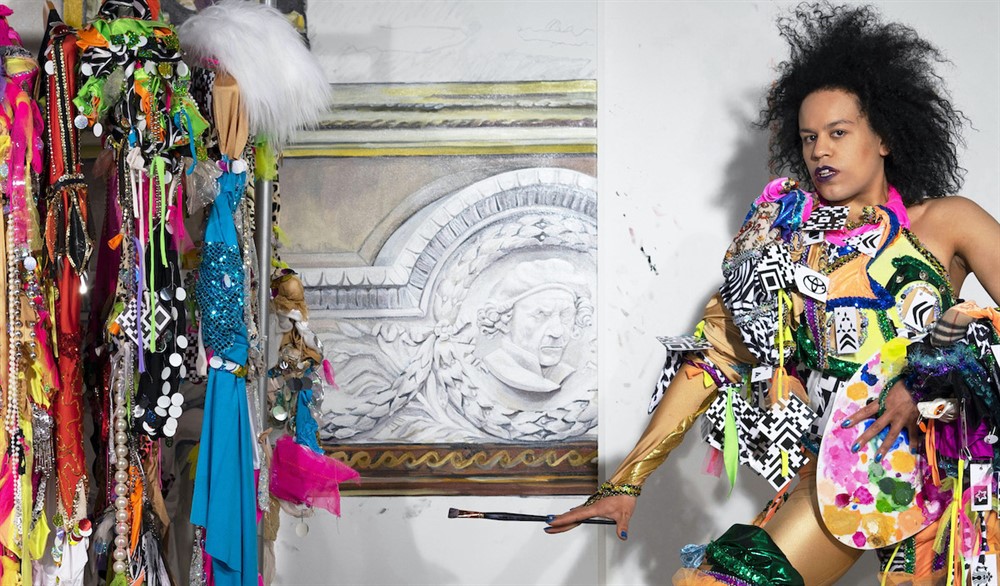 As well as being biracial, I’ve learned to navigate different social groups within society – i.e. from my lower working-class childhood in Birmingham, through to the privileged environment I encountered as a student at The Ruskin, University of Oxford. As a result my inscription within any specific category is ultimately non-specific, which affords me the licence, and the daring to cross between these established structures and narratives, to interrupt and re-write our readings of them in liberating new registers, and to highlight what feminist theorists have long asserted – i.e. the performative nature of identity and power.

My artworks are informed through skills and knowledge acquired through practicing and strategically deconstructing a variety of learned languages – i.e. prior to attending art school at The Ruskin and Goldsmiths, I trained as a dancer: IDTA Freestyle Disco, Latin American and Jazz - and worked professionally on the cabaret theatre circuit for two years. I also worked as a striptease performer in various gentlemen’s clubs, trained to play classical cello (Suzuki method), and later studied acting at Rose Bruford College. Historically I’ve also deployed QC as a music act, staging performances to operate as a semblance of pop. 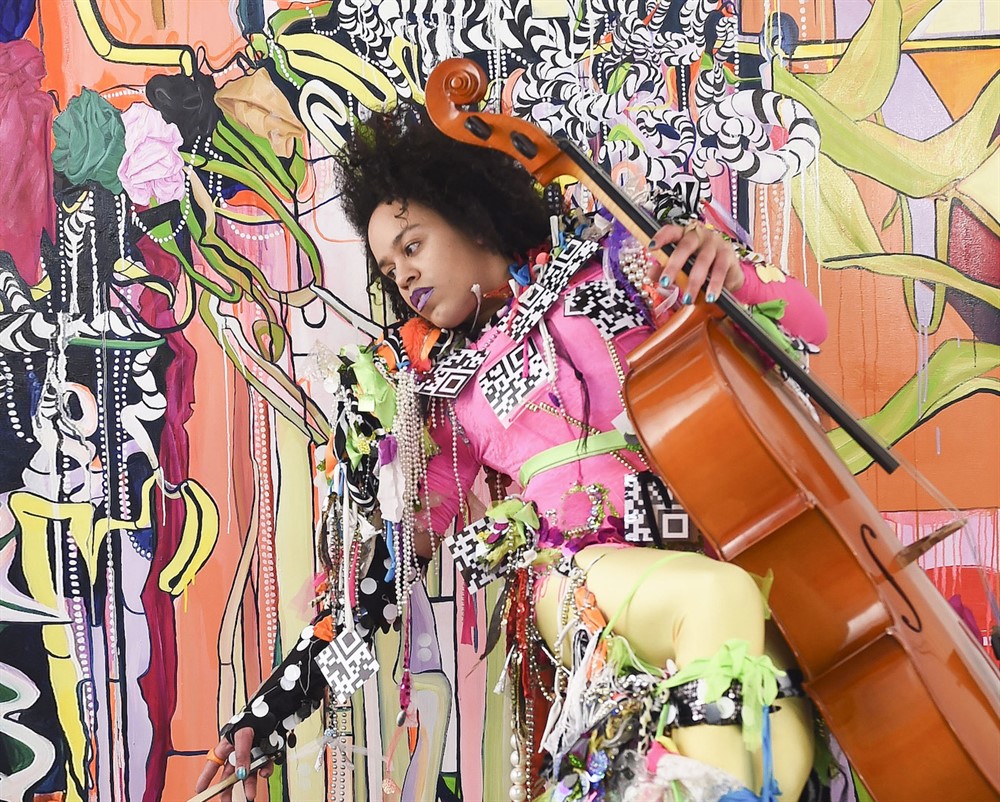 Where did Quilla Constance come from?

My birthname is Jennifer Allen - and Quilla Constance (QC) is an art persona I’ve cultivated and deployed since 2009. QC is an agitator and an overt militant-punk, feminist exoticization of Jennifer Allen. It’s hard to identify where Jennifer Allen ends and QC begins (and vice versa) - and I strategically prolong this tension to invite and choreograph confusion and ambivalence, since QC is born out of, and best operates from a position of imbalance, where learned categories become undone, and can be questioned and reworked.

QC is an activist, and through QC I seek to locate and assert new points of agency for marginalised subjects within hegemonic systems of power. 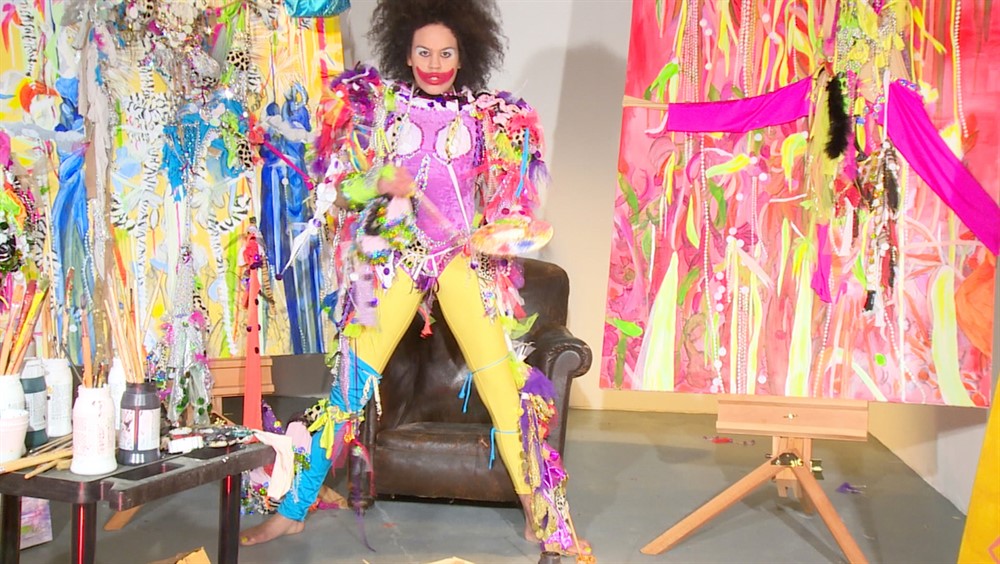 Tell us about 'Teasing Out Contingencies' (aka your lockdown project) opening at Tate Exchange, Tate Modern - how did that come about?

‘Teasing out Contingencies’ (TOC) - Funded by Arts Council England, is my ongoing project with Tate Exchange, Tate Modern, The Higgins Bedford (Sir William Harpur Gallery), and Bedford Creative Arts - it will run from 2019-2022. In the wake of Covid 19 it’s now also become my lockdown project. 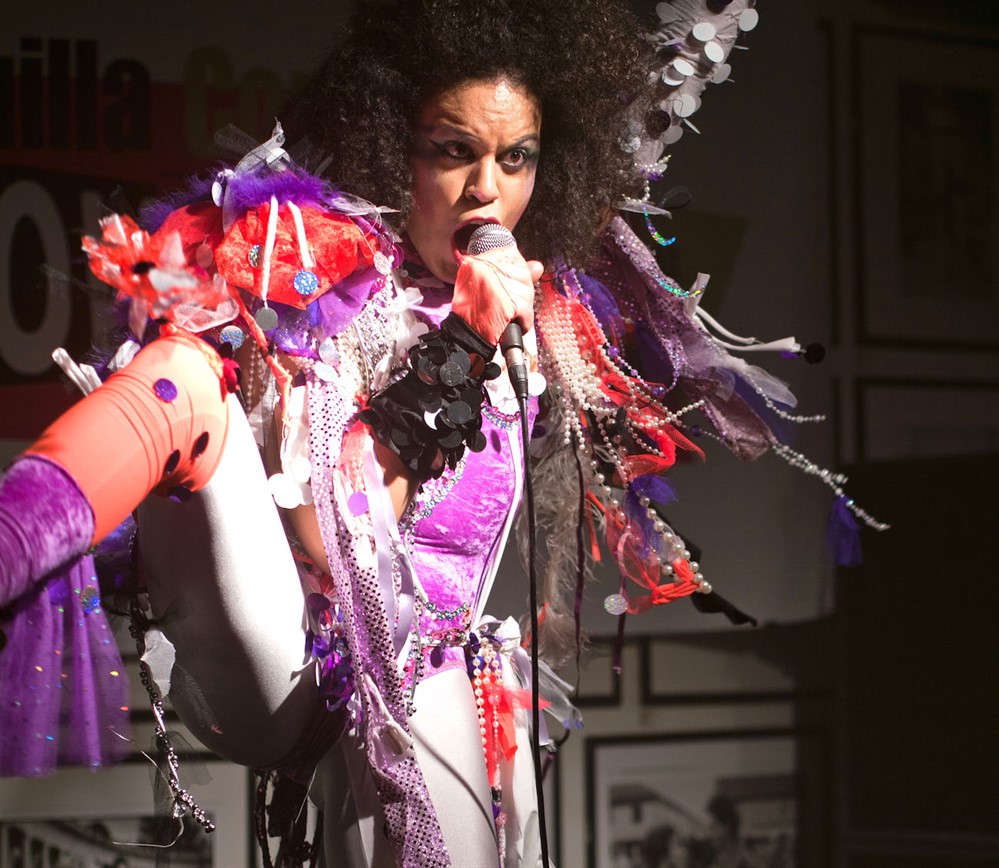 I was then commissioned by Artichoke Trust and Bedford Creative Arts to work with women of Bedford to create a large-scale banner artwork for ‘Processions 2018’ – a major street event in London, celebrating the centenary of women’s right to vote. All of these projects delivered socially engaged activities to varied extents, and it became clear that aspects of my practice were functioning to successfully engage diverse members of the public, and in turn, stimulating pertinent political discourse. As such, the platform I’ve been offered at Tate Exchange, Tate Modern bodes well for the development of my practice within this remit, and beyond.

Just prior to the announcement of Covid-19 lockdown, I issued a call-out for members of the public to visit my Open Studio at Tate Exchange, Tate Modern, dress up in my costumes, respond to eclectic music mashups, pose with props and create amusing and liberating scenes. These images will feature in my next large-scale oil painting, within a composition set against opulent interiors from Buckingham palace. I intend for this piece to locate and assert new and empowered modes of being for marginalised subjects. A team of producers from Bedford Creative Arts and Tate Exchange assisted with delivering these Open Studio workshops, and in total I photographed over 800 participants including students from UAL, Reading University, Bedford College, Norwood School, various London community groups, and Tate's vast demographic of international visitors - it was great fun, and so pertinent to watch the frenzy unfold. There was a real feeling of solidarity, and I seek to capture these scenes in my painting.

Unfortunately, I can no longer engage with the public directly, due to Covid 19 lockdown, but I believe there's an increased urgency to create and disseminate artistic visions where problematic socio-political barriers are removed’. 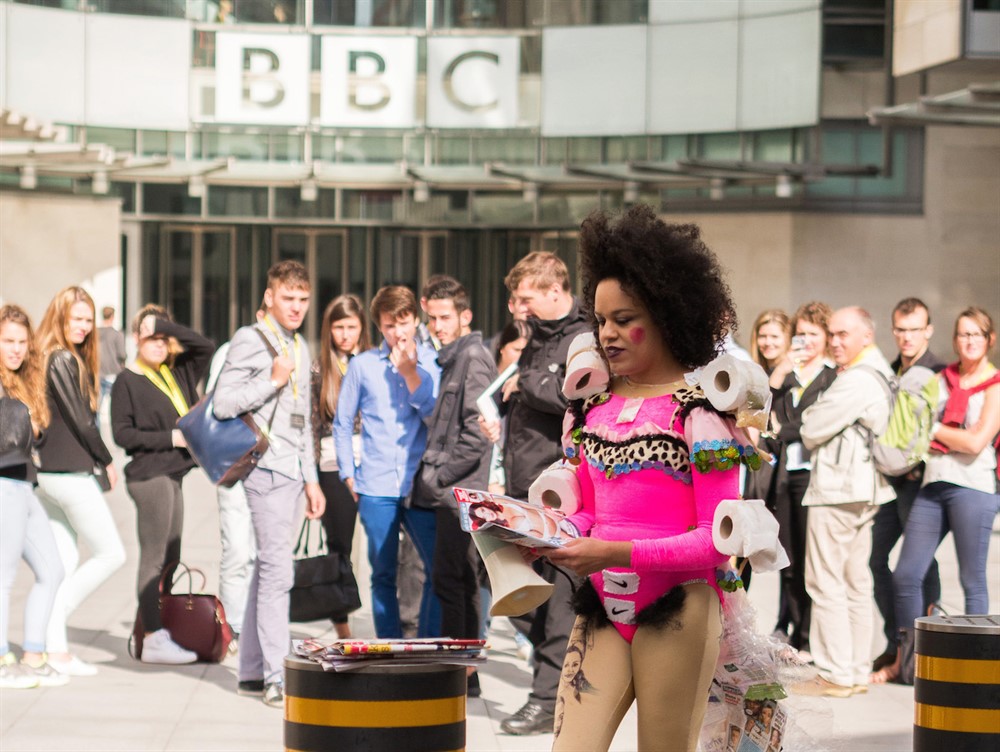 I want diverse audiences to feel actively engaged by my work. To this end, I host workshops and other socially engaged activities alongside my exhibitions, as an extension of my practice. I encourage people to participate and get creative in response to my artworks. I intend for people to feel stimulated and inspired to generate new discussions about the relations between art and identity, and to consider possibilities for locating and asserting empowered new narratives for all subjects, but especially those which are often marginalised within hegemonic frameworks, such as BAME, LGBT, women, and working class identities.

The playful, activist photographs of Zanele Muholi - the urgent and compelling installations of Kara Walker - the bravado and biting satire within Paul McCarthy’s oeuvre – and the frank, unflinching vocal observations of the Guerrilla Girls.

My Open Studio Installation: ‘Teasing out Contingencies’ (TOC) at Tate exchange, Tate Modern is scheduled to open in late 2020 (dates to be confirmed in line with Covid 19 guidelines). TOC will then tour to The Higgins Bedford, Sir William Harpur Gallery in 2021, where it will culminate in a 6-month solo exhibition. My new large-scale oil painting, costumes and live performances will be installed at Tate Exchange and The Higgins, alongside further workshops and symposia to engage with/discuss this project. Confirmed speakers are as follows: Dr Mo Throp (Senior Lecturer, Chelsea College of Arts, UAL) Dr Alexandra Kokoli (Senior Lecturer in Visual Culture, Middlesex University), Adelaide Bannerman (Freelance Curator, Artist and Writer) - and myself, (Artist and Researcher). 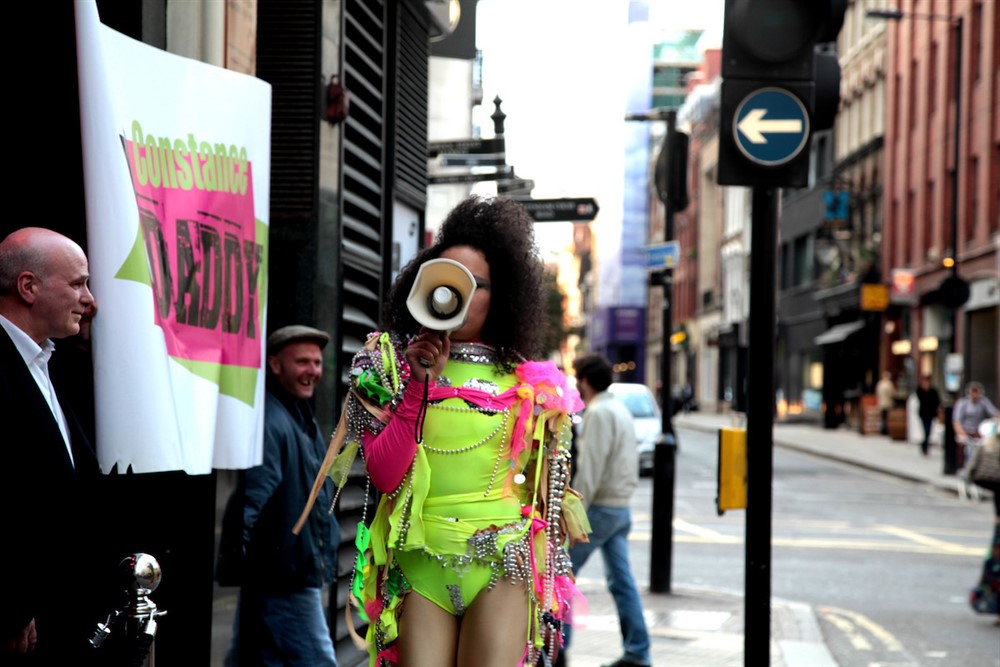 Is there anything else you'd like to say or tell us about?

My new web page for ‘Teasing out Contingencies’ is now live, including a link to a critical text on my work, written by Dr Alexandra Kokoli for Black Artists & Modernism at Van Abbemuseum:  https://www.quillaconstance.com/teasing-out-contingencies/

Also - a passage on my practice can be accessed via ‘A Companion to Feminist Art: Crossing Borders and Other Dividers in Western Europe and The British Isles’ – Wiley-Blackwell, 2019: https://www.wiley.com/en-gb/A+Companion+to+Feminist+Art-p-9781118929155

And here's the catalogue for my previous solo exhibition at MOCA London, 2017: https://www.moca.london/