Our Artist of the Month for September 2020 is Chantal Powell.

I work with the language of the unconscious, which is one of symbols and metaphor. It’s a paradoxical language that is experienced by intuition or poetic understanding. We find it in our dreams, in archetypal symbols across cultures, in myths and legends. It’s both familiar to us and at the same time has a potency that is a deep mystery, enabling us to gain a deeper understanding of the psyche.

I did a Phd in social psychology many years ago but in recent years my focus has been Jungian depth psychology alongside a study of alchemy as a metaphor for the transformation of the Self. I’m particularly interested in symbols that have synchronistically come into my life which I then follow the threads of through alchemy, mythology, and analysis. An example of this is the toad. About a year ago toads started arriving in my house under a door gap. I started photographically recording these visits as well as the form in which they appeared (a toad with only one eye, a pair of different sized toads, a dead toad, a pair of mating toads . . .). Alongside exploring the psychological associations of these within my personal Jungian analysis sessions, I researched the toad in fairytales, in Egyptian mythology, in alchemy and so on. In alchemy it is used to symbolise the Prima Materia - the primitive formless base of all matter (chaos) that must undergo a series of operations that will turn it into the Philosophers’ Stone. In Egyptian mythology there is an association with the “gennii” creatures of slime and mud that swam in the primeval waters and formed the primeval egg. In fairytales it is linked with the feminine, the earth, the mother and the unconscious. In this way a deeper relationship with the symbol starts to form and then I take that understanding into the artwork. The visual outcome of my work is most often sculptural objects. 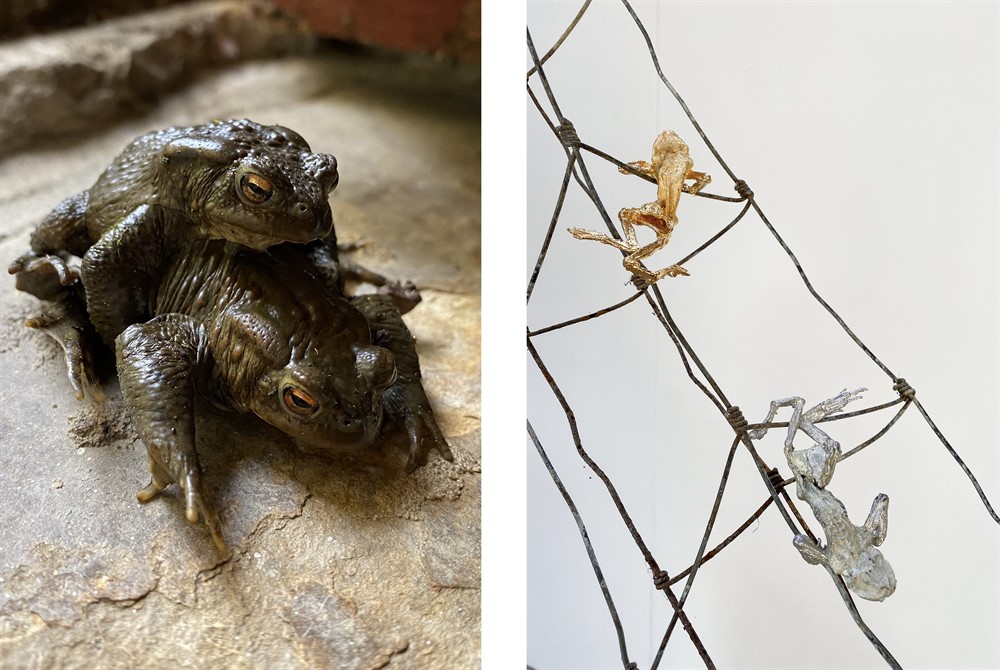 We previously featured some of your works in our Five2Watch feature on experiences of disability and illness. One series of your sculptures makes reference to self-healing and talismans; I wondered whether you could talk more about this series of work?

Sure. I have worked round a health condition for many years – chronic fatigue syndrome (M.E.) - but four years ago there was a period in which it became very debilitating. I was bed bound, struggling with basic life functions and unsure if I’d be able to work again. I couldn’t tolerate sound or light easily, was unable to read and found myself questioning my value as a human being when life functioning is stripped away. It was my dark night of the soul and prompted the beginning of me exploring the mysterious threshold below our conscious existence.

Thankfully I did recover from this low point and when I began to make art again, the objects I put together were part of my healing journey. They were small and usually made from a few natural materials that I was able to gather on an occasional venture outside. I called them “studies in self-healing” and they were small psychological reflections but they also felt like personal talismans I was making for my well-being and protection. I was reminded of the African spiritual power objects – Nkisi – that look to bring change and renewal through an interchange between the world of the living and that of the ancestors. It now strikes me that there is a parallel there with the transformational healing that comes from the interchange between conscious and unconscious worlds through psychoanalysis. 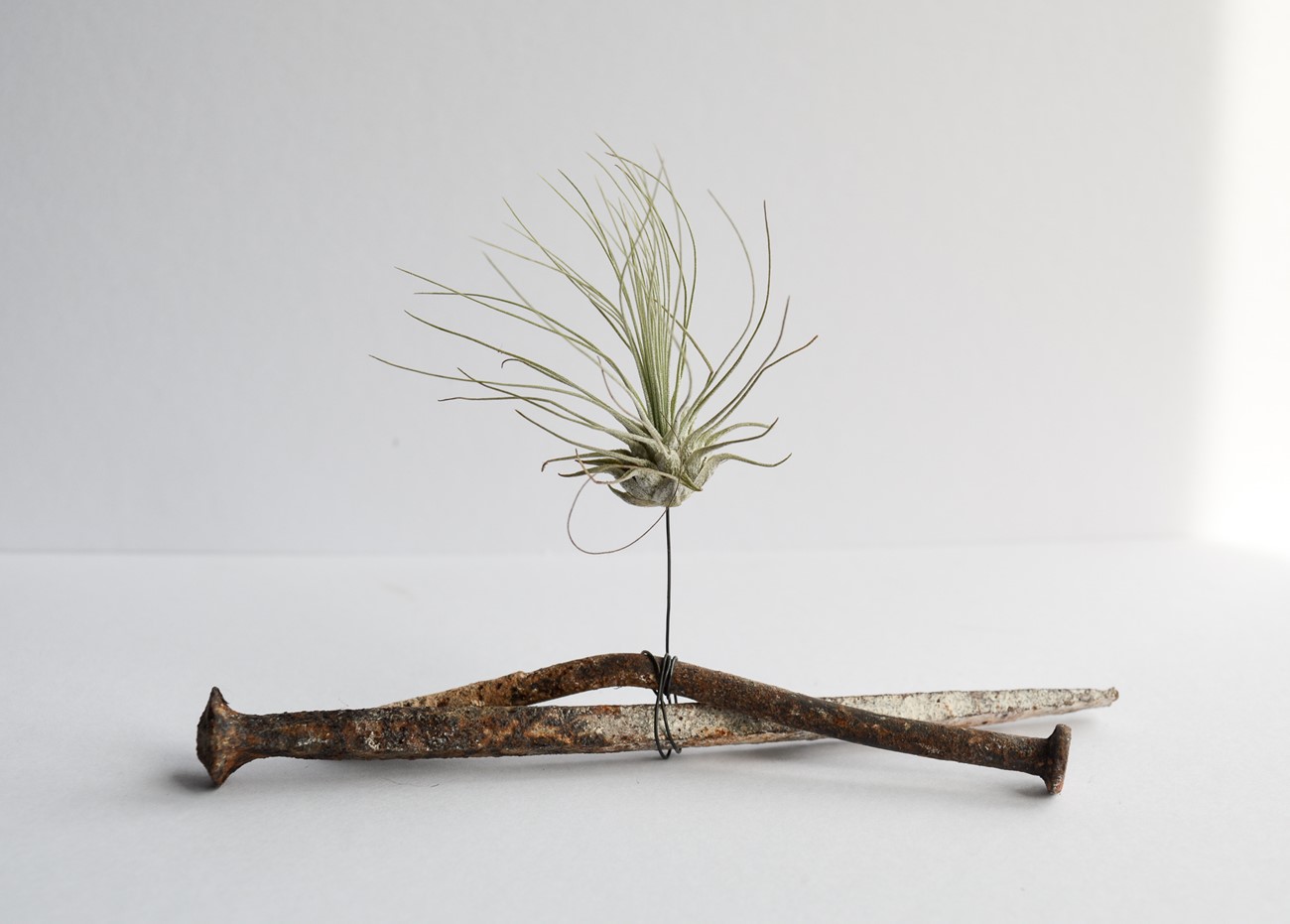 Other works outside of this series also have a similar size and form, they look almost as if they should be used or worn rather than sit on someone’s mantelpiece. I wondered how you see these works existing outside of a traditional exhibition context? Is ‘sculpture’ the best way to describe them?

I refer to them as objects more often than sculptures and I suppose I view them in a similar way to the Nkisi I mentioned because they are imbued with something. I’m not making decorative sculpture for a mantelpiece; I’m sharing something of my grappling with the unconscious. It’s usually after the work is complete that I start to make deeper personal connections/revelations that go beyond my original conceptualisation. Ideally the piece does its work with me first and then goes out into the world to see what it has to offer there.

I made a pair of bronze Dogon ladders that I think illustrates this idea of an object being able to carry multiple symbolic narratives. Dogon ladders are interesting objects to think about. They were carved out of tree trunks and used to access granaries and rooftops in Mali, however miniature versions were also made as spiritual objects representing the ascent of the soul. This double usage is fascinating. I was drawn to make my own pair reflecting on this relationship between the physical, practical world and the spiritual. With a symbolic object like this there are always more layers and parallels such as the psychological and alchemical processes of ascending and descending, the volatile and the fixed. 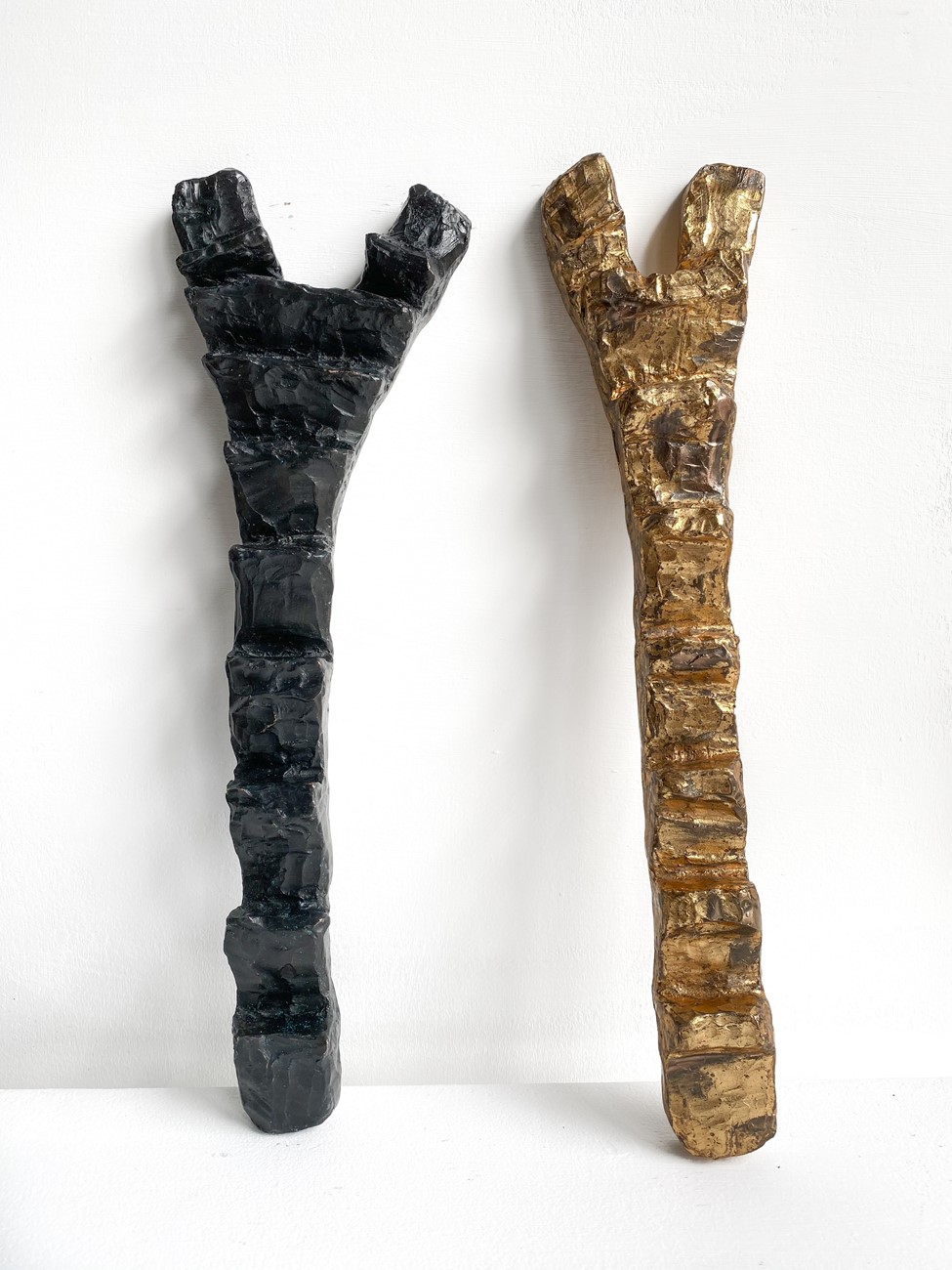 Some of your work uses symbolic or alchemical processes in its making. It's easy to conjure up an image of you creating these artworks in a sort of mystical fashion. I wondered how important process is to your work? Is there a performative element to the work that you do?

There has never been a performative element but there is sometimes ritual within the process. Ritual can by thought of as symbol in motion and is something Carl Jung advocated as a means of approaching the inner world. For Lazarus Stones (a piece made whilst still in recovery) I made pilgrimage to the sea each day, and from this threshold point where land meets water (the sea being a symbol of the unconscious) I would take a stone I was drawn to which I then cast in tin (a metamorphosis – keeping its form, changing its matter). The stones were made into a circle on a base of clay that was dug from the cliffs on the same shoreline. A stone circle is a sacred place. It sits at the intersection of myth and reality with many stone circle legends linked to transformation and shape shifting. 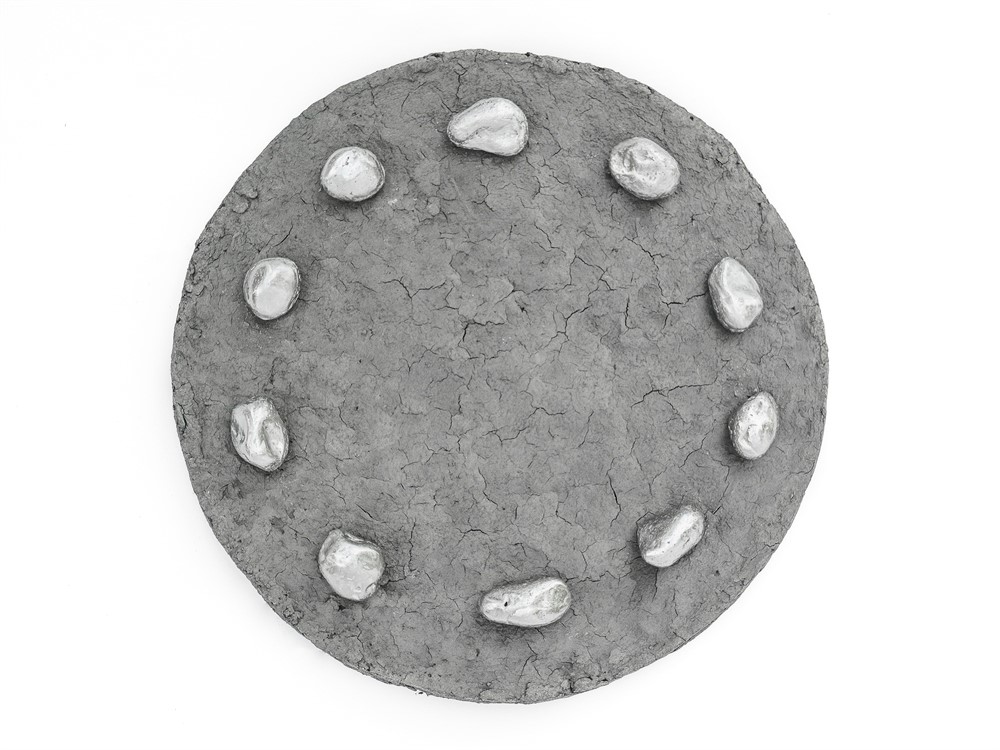 Process has definitely become more important in my work than it was. I use it symbolically in a similar way to my materials. For example, I smoke fire clay in an oil drum outside to connect to the calcination process of alchemy and the psychological burn of analysis. Unlike using an electric kiln I have very little control. The blackening, the cracks and breaks are all part of the work as the process and the influence of the elements is fundamental. Much like the alchemists being transformed through their labours, I’ve also learned from these processes. Learning the importance of letting go of control, of embracing unexpected change, of patience and humility. “It is through the fire that Nature is changed” - Eliade Mircea, The Forge and the Crucible, 1978 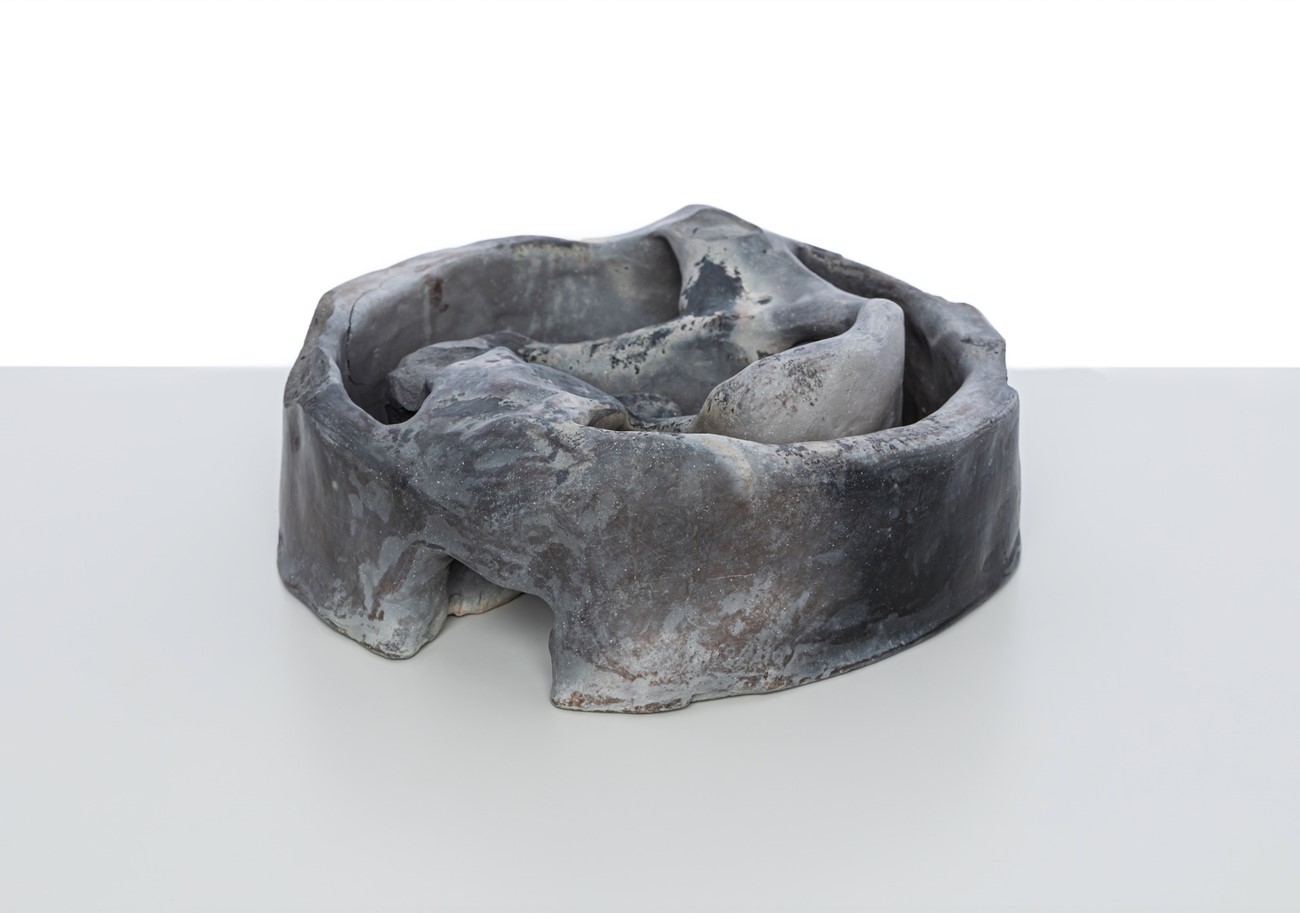 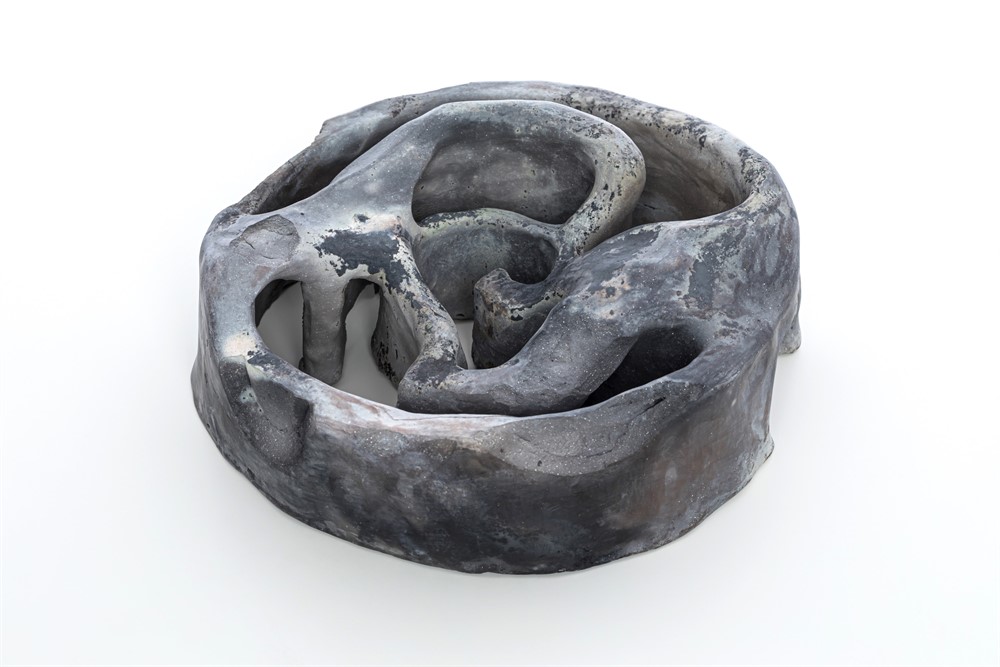 You are also the founder and director of an artist residency programme at Hogchester Arts. Could you tell us more about this programme? Do these organisational processes also influence your work?

Hogchester Arts is a not for profit arts organisation interested in intersections between contemporary art practices and the 75-acre conservation site of Hogchester Farm in rural West Dorset. The main focus of Hogchester Arts is an artist-in-residence programme and resulting bi-annual summer exhibition. Artists are selected from an annual open call and join us here for a couple of weeks.

Hogchester’s site is a rich diverse landscape including ancient trees, streams, woodland and wildflower meadows. It has a deep-rooted history – Druids were active here, and two of their Yew wands have been found in the area. Stone Age axe heads have been found on site and we are just one mile from the Jurassic Coast. The place really is ripe for reimagining’s of myth and magic.

Sharing a studio with visiting artists has had such a positive impact. It’s been both inspiring and liberating seeing how differently artists approach their working practice. I’ve felt freed to try new ways of working myself, to think from different angles, and I’ve made lasting relationships that I’m very grateful for. 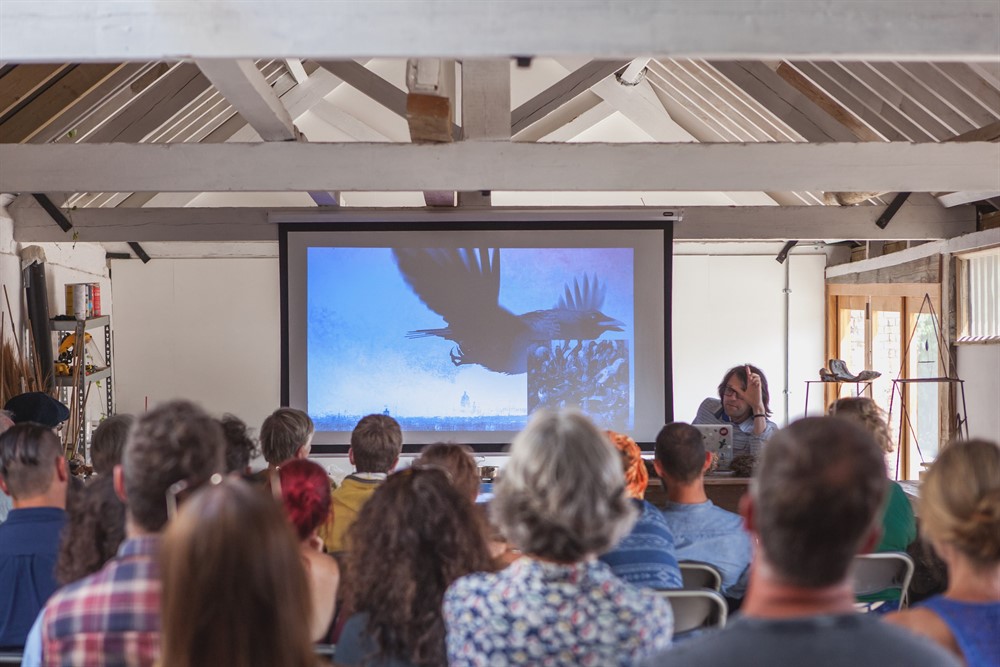 What artists working at the moment do you admire?

A few current favourite insta follows that I feel a work affinity to are: Evgeny Antufiev (@evgenyantufiev), Aimee Parrot (@aimeeparrott), Tomas Diaz Cedeno (@tomasdiazcedeno), and Ella Walker (@ellawalker.me). Insta handles supplied so you can enjoy their work too!

I’ve been working on a collaborative project called Night Shaking with artist Dean Melbourne. The project moves in the space of Jungian depth psychology, alchemy, mythology and the unconscious. In particular it looks at the archetypal Night Sea Journey we both found ourselves forced to encounter in different forms in our personal lives, and its resultant transformative qualities. The Night Sea Journey is a motif of descensus ad infernos – a journey into Hades, an immersion into the unconscious that has its parallels with the psychological “dark night of the soul” and the alchemical “Nigredo”.

The project received funding for a 9-month research and development stage from A-N (The Artists Information Company), which included working with a Jungian analyst and researching alchemical manuscripts in the Wellcome Collection’s rare materials archive. Since then we’ve been making work and are now ready to open out the conversation in a variety of contexts including exhibitions, talks and a publication. The first public outing of Night Shaking will be a small conversational residency at The Garage (run by Helen Acklam) in Bristol this October. We will be there for 3 weeks testing out works and hosting conversations and talks about alchemical transformation and experiences of confronting the shadow within the Jungian individuation journey.

In March 2021 we will be collaborating with the Ingram Collection on an exhibition at the Lightbox in Woking. They have an amazing collection of British Modern Art, and we will be curating works from the collection that are archetypal in terms of the project. There will be works by Graham Sutherland, Elizabeth Frink and Lynn Chadwick and we will curate those alongside works that we have been making ourselves.

Night Shaking is not just an art project it’s a challenging introspection and attempt to tune into what Jung called the Spirit of the Depths. That is a lifetimes journeying and I hope my art practice will continue to be one output of that. 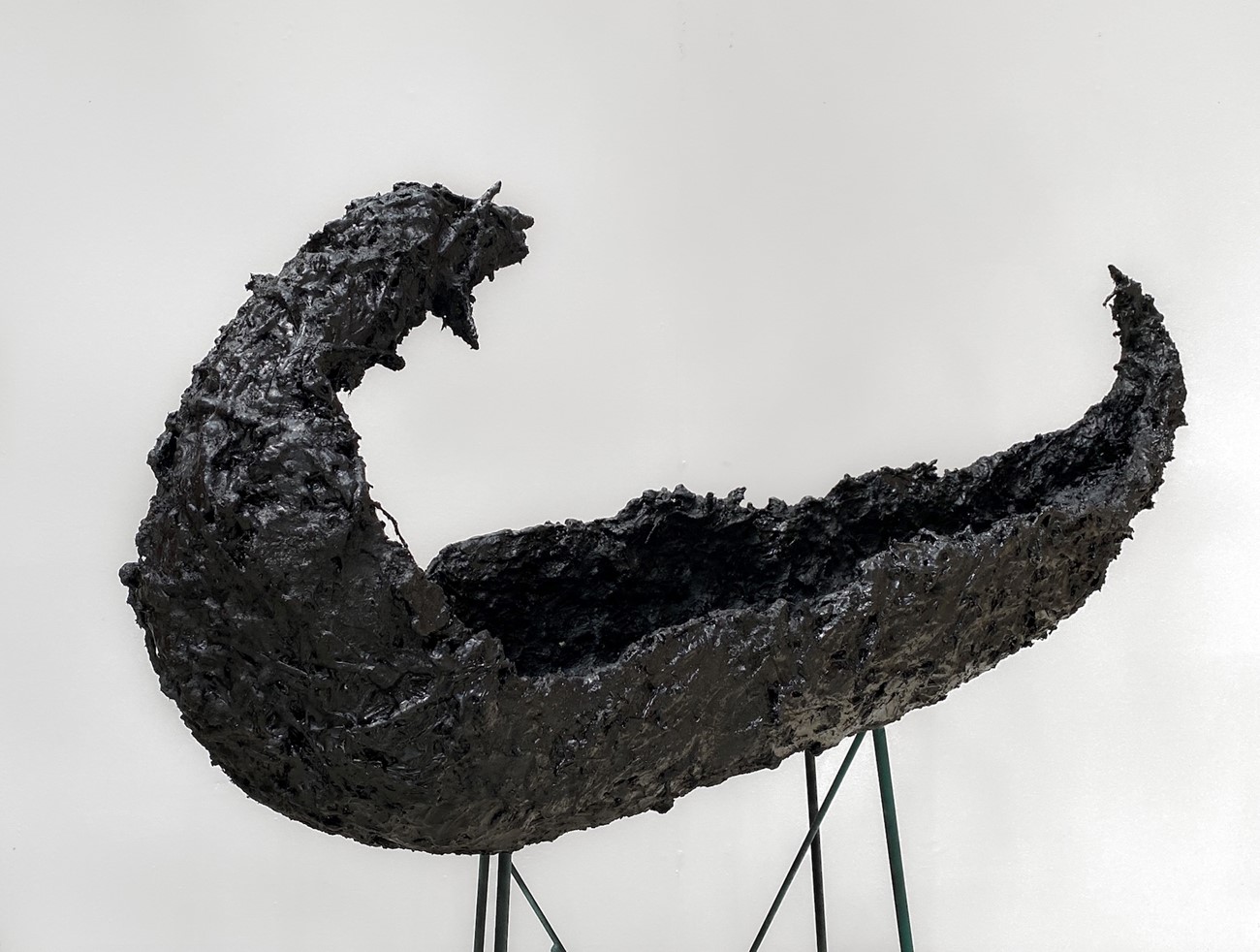