May I begin with an anecdote? When visiting the Mauritshuis in Den Haag at the age of five, I managed to put a whole troop of museum guards on high alert: There was this huge beautiful painting by Rembrandt, and I was drawn to one of its corners where dark tones mysteriously merge into each other while the oil paint reflected the light. I watched it and then reached out to touch the surface ever so slightly. It had to be - but of course it wasn't meant to be… My gentle touch had an enormous impact: the alarm worked very well indeed calling the guards immediately on site. No action ensued - they found everybody looking sheepishly innocent.

I remember other occasions when this tactile, sensory streak came to the fore: out of a multitude of impressions a single one sticks out, touches me and I return the touch. It was this pleasure of touching materials that probably led me to study textiles at the 'Schule für Gestaltung' in Basel, Switzerland. Weaving was one of the main topics. Handling, connecting and joining threads became second nature. After art school I expanded my training through ‘learning by doing’: working on building sites, in a fine-mechanic workshop and in theatre workshops gave me a feeling for space and the confidence to handle (power-) tools. This was training on an outer level. My inner landscape has been greatly influenced from a young age by various chances to nurse others.

All these parameters now flow in to my sculptures and installations. Thread has become my medium to build surfaces and bodies that capture and redefine space. Textile techniques, detached from their traditional context and purpose, are the grammar of my sculptural language. As with texts, the essence lies between the lines. 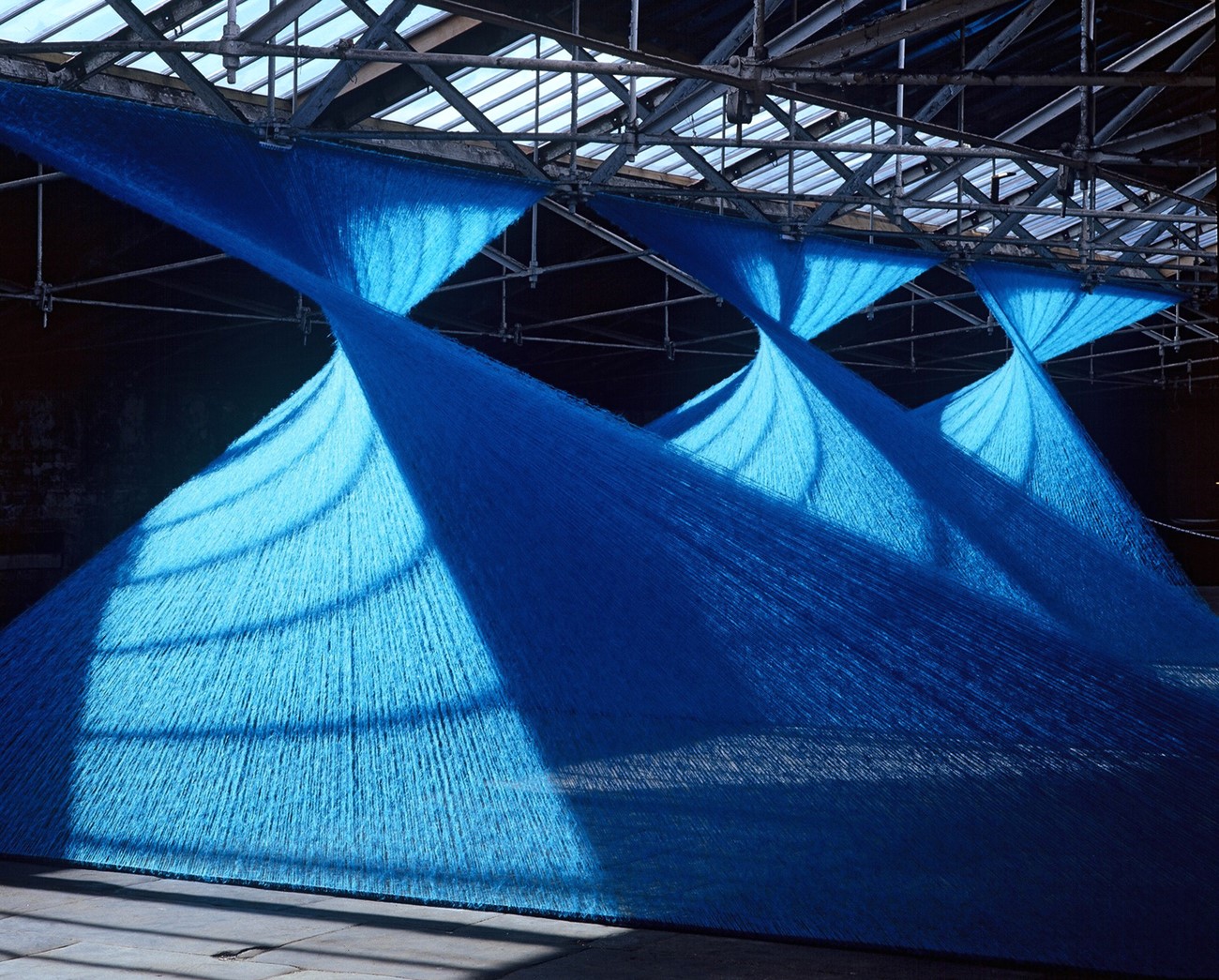 You've described your work as 'Sculpture as drawing - Drawing as sculpture', can you expand on this?

Thread as such can be considered as a two-dimensional line. Yet when this line expands into space, it becomes a three-dimensional object. I use thread to draw in space. The threads form surfaces or solid bodies or - almost like a sketch - only hint at a shape that viewers will complete in their minds.

In my book works, threads take on the role of text lines. This brings back the common root of text and textile: Latin textus means woven. 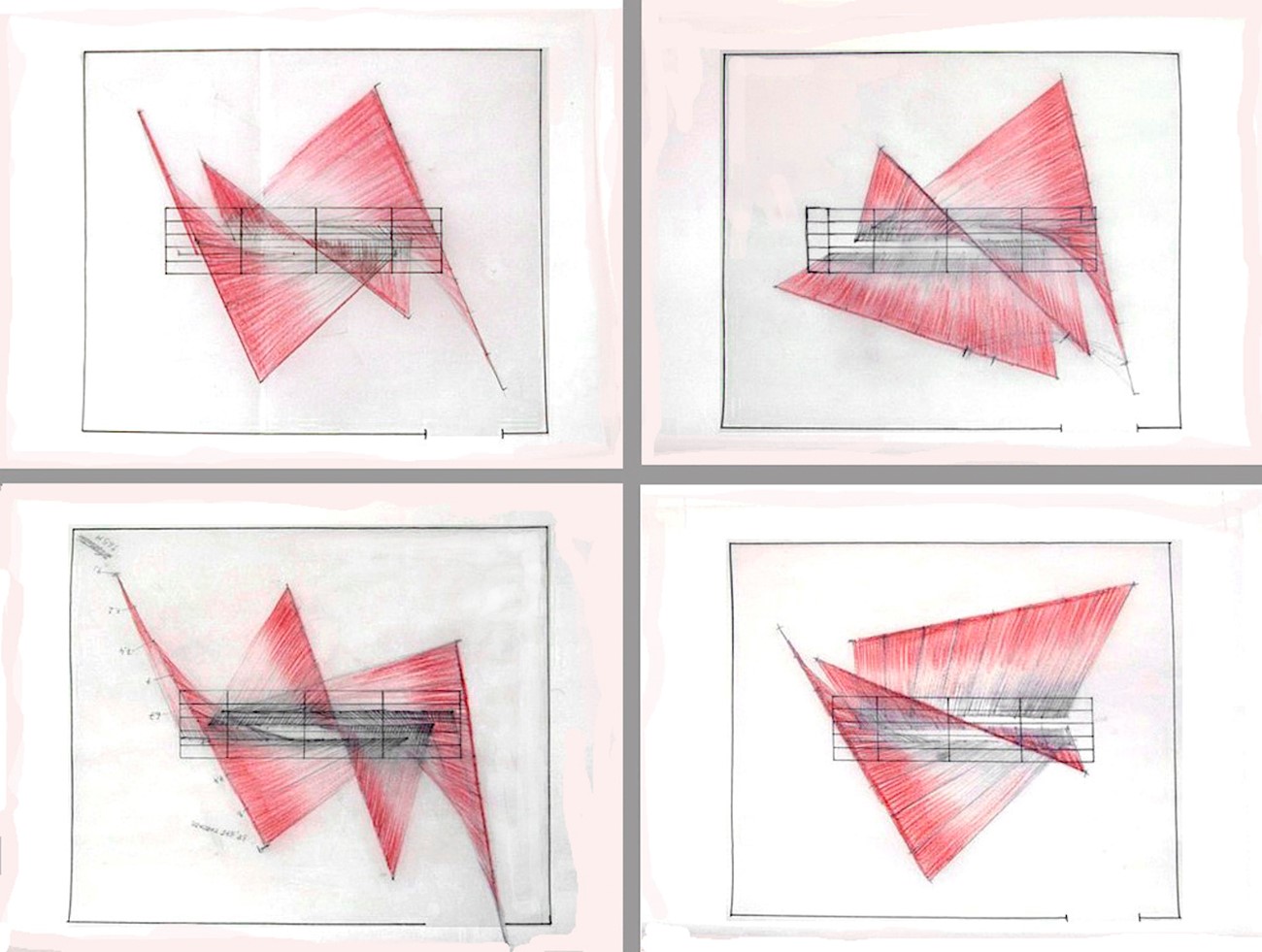 What role does light play in your work?

Light is at the core of my work as long as I can remember. Not as a source but rather this moment when light meets matter: luminosity.

For instance, I use nylon thread to capture light reflections by illuminating cross-sections/slices of bundled nylon threads with LED. Or I play with the fact that light shades reflect light while dark shades absorb it. Globe is an example for this, and Blue Moon takes the same effect using cyanotype into a photographic field.

Aire-Wave, a large woollen site-specific sculpture was installed in the roof space of a former textile mill. Throughout the day, the light falling through the immense skylights created continuously changing drawings on the curved semi-transparent surface of the three waves and the floor.

There is no intention in what people should take away from my work. I feel I’m developing my own language to express what I cannot say otherwise. In this sense my sculptures and installations may be seen as non-verbal statements that reflect something that’s within me. Some can relate to that, others may not, but ideally the works invite to some kind of dialogue. I’ve also heard people say that they find my work meditative.

Tell us about your current project in Hull.

I currently use an empty shop unit in Hull, where I'm based, as a studio. The space, made available by Axisweb, is in the middle of the pedestrian zone. - Setting up site-specific work is part of my practice. Usually, when an opportunity comes up there is only a narrow time window to set up work and, as my installations can be quite intricate, this means everything has to be prepared and the logistics has to be thought through carefully. To actually have a space available without immediate deadlines means that I can work and experiment on site. This felt ideal but also meant that I step out of my comfort zone - as a shop and its situation were new territory. Imagine: a single studio space next to money- and beauty-shops or kiosks with shelves stuffed from floor to ceiling while much of my work plays with empty space.

The space is in the city centre’s pedestrian zone. Two large shop windows towards the street frame a receding entrance bay. Inside the shop unit is generous, has high ceilings, large windows and an interesting floor-plan. Overall the space is in that kind of raw state that is ideal for my work. 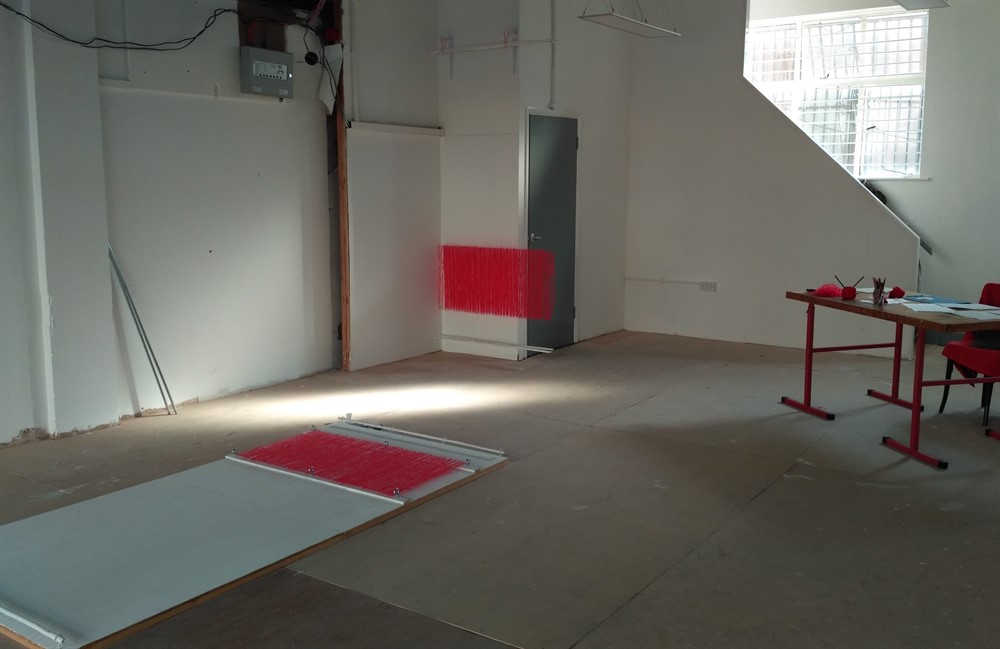 Having been empty for a while Unit 47 needed some TLC. Thus my first “performance” was cleaning and tidying up, a chance to become familiar with the space and its nooks and crannies. Once water and electricity had been switched on - the first time after two or three years - it all became real.

So far I’ve worked in the space using quite basic materials: thread, bamboo canes and plaster bandages. After making a very simple ‘loom’, I began to build up work for the two shop windows. As the shop has no shutters, this has been a rather public endeavour. In fact, at times setting up the two sculptures for the window niches felt like a long-term performance. Passers-by and people seeking shelter in the entrance seemed to follow the work in progress. This led to encounters and conversations that could be very moving, last but not least with homeless people who spend much of their time in the area.

I have now completed a third installation inside the space trying out to sketch space and shapes with nylon and wool. There may be more sculptures to come and there are plans for time-based work in co-operation with other artists. 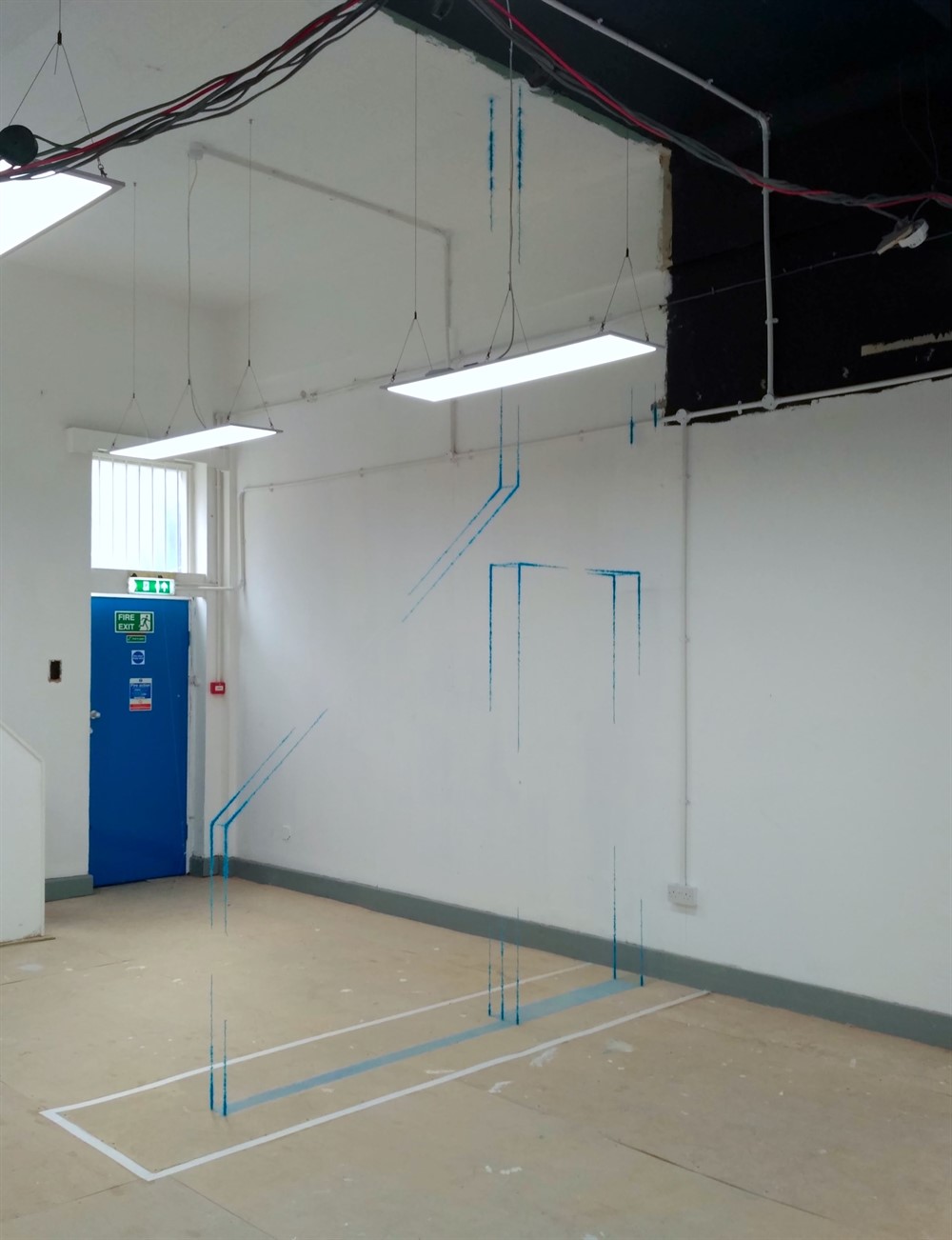 I like the quietness of Vija Celmins’ drawings of night skies, spiderwebs and minute details of the surface of the sea. It can take her a year or more to complete a drawing.

Gunnel Wåhlstrand’s large-scale ink wash paintings of family photographs impressed me when I saw them life in the Museum Boijmans Van Beuningen in Rotterdam. Building up images in countless layers of diluted ink, her paintings slowly emerge like photographic prints in developing fluid.

And then there are Il Lee’s huge abstract ballpoint drawings that he builds up with repetitive motions layer upon layer.

I look forward to taking part in a studio event at a cultural festival in Berlin this September.

Also, there is potential to set up time-based work in the upper floors of the studio I currently work in Hull. That would entail that we open the space to the public as an exhibition space.

Otherwise I look forward to restoring my own studio to working order after I’ve passed on some equipment and to taking up my threads and pencils there. Increasingly I see my work as a journey rather than a career, especially in the current political climate.