For May's Artist of the Month we've selected Cardiff-based artist James Moore. We talk to him about his painting practice which explores the artificial nature of visual culture.

I live in Cardiff and I have a studio here. I moved away for a while to study Fine Art in Manchester and London and worked in those cities for a number of years, but it's good to be back out West.

Mainly I'm a painter and my pictures are representations of various simulacras - things such as computer games, models, dioramas and movie sets. I'm trying to draw together meaning from the increasing simulations that make up our visible environment, using painting as an affective space in which I can re-compose what I'm seeing and try to sift some meaning and desire from the artificial nature of our visual culture. I'm also working on an ongoing series of history paintings, playing with a genre which in the past was the absolute pinnacle of an artist's career.

I exhibit with Paper Gallery in Manchester and have been involved with them since they launched the gallery. They're great fun to work with and I'm really honored to be part of their exhibitions in Manchester, at Art Fairs and other galleries. 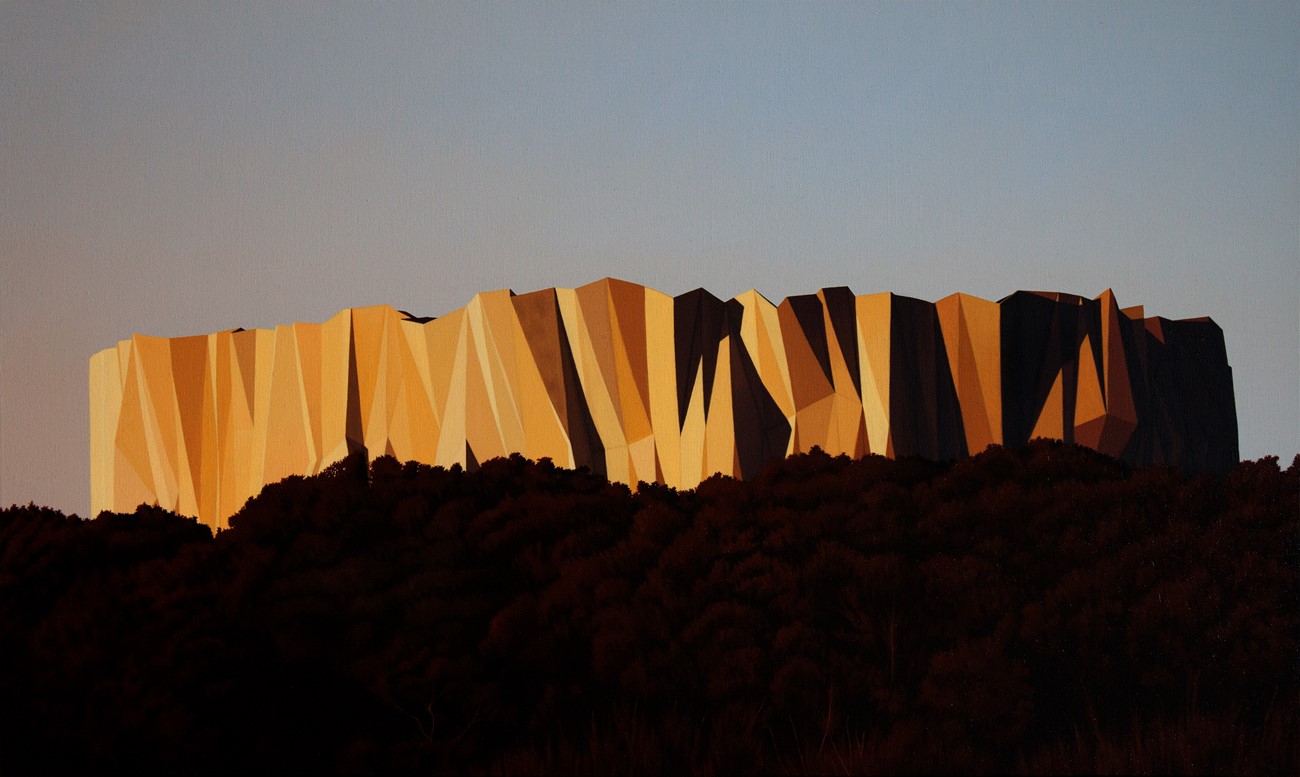 Curation has formed part of my practice on and off over the years. Back in 2005/6 I was part of Castlefield Gallery's mentoring programme where I had a year of support and guidance towards the development of an exhibition at the gallery. I was one half of a curating duo with Dawn Woolley called Another Product, and we ran a space in the Northern Quarter for a while, and also held some exhibitions in London and Leeds.

More recently I've been helping to curate and organise stuff at RUG gallery in Cardiff - which is directed by John Abell. The gallery space came about from one of the Axisweb Vacant Spaces alongside Sull and Shift - all of which are really great spaces right in the centre of Cardiff.

Right now Wales has a massive surge of brilliant critically engaged painting going on - the flagship for it is BEEP in Swansea, which keeps growing and growing. BEEP is international but there is usually a strong Welsh contingent involved. BEEP 2020 is going to be massive! In recent shows at the contemporary galleries around Wales painting is in the mix at the forefront of exhibitions and its ability to connect with audiences remains unsurpassed.

I'm also jointly running a painting network group called 'Paint Club Wales' with Andre Stitt. It was setup mainly by Gordon Dalton, but he moved away and handed it over to me and Andre. It now has about 300 members and we meet up about once a month to do studio visits, see exhibitions, have a chat and hang out together. We've never had all 300 members at a meeting - usually 20 or so people come along. Anyone who's interested in joining can find us on Facebook.

What's the starting point for a piece of work?

I have sketchbooks full of hundreds of drawings of potential paintings and a burgeoning visual archive of photographs that numbers into 1000s of prints and digital images, a mixture of my own imagery and things I've downloaded or cut-out from other sources. These form the starting point for works from a technical point of view and I'll usually develop a collage in Photoshop or construct a 3D model on the computer. In turn these form the reference image and during the painting process the materiality of paint, scale, colour and a characteristically indescribable feeling for the image inform and change the composition as I work on it.

In terms of subject matter the starting point is somehow connected to a deep assignment that I find hard to clarify - there's an intellectual aspect to my work, which is the development of a body of paintings that examine simulacra in one form or another, a sort of verification of inner space and visible fictions. There's also a visual aspect which is connected to aesthetics and mimesis in philosophical terms, and also articulation of basic visual pleasure.

These things are contingent on mood, memory, what's going on in my life at the time and what's going on in the world at the time. Also there might be a curatorial theme that I'm working within. Generally I'd say that various ideas from surrealism also play a part in the starting points of almost all of my work. 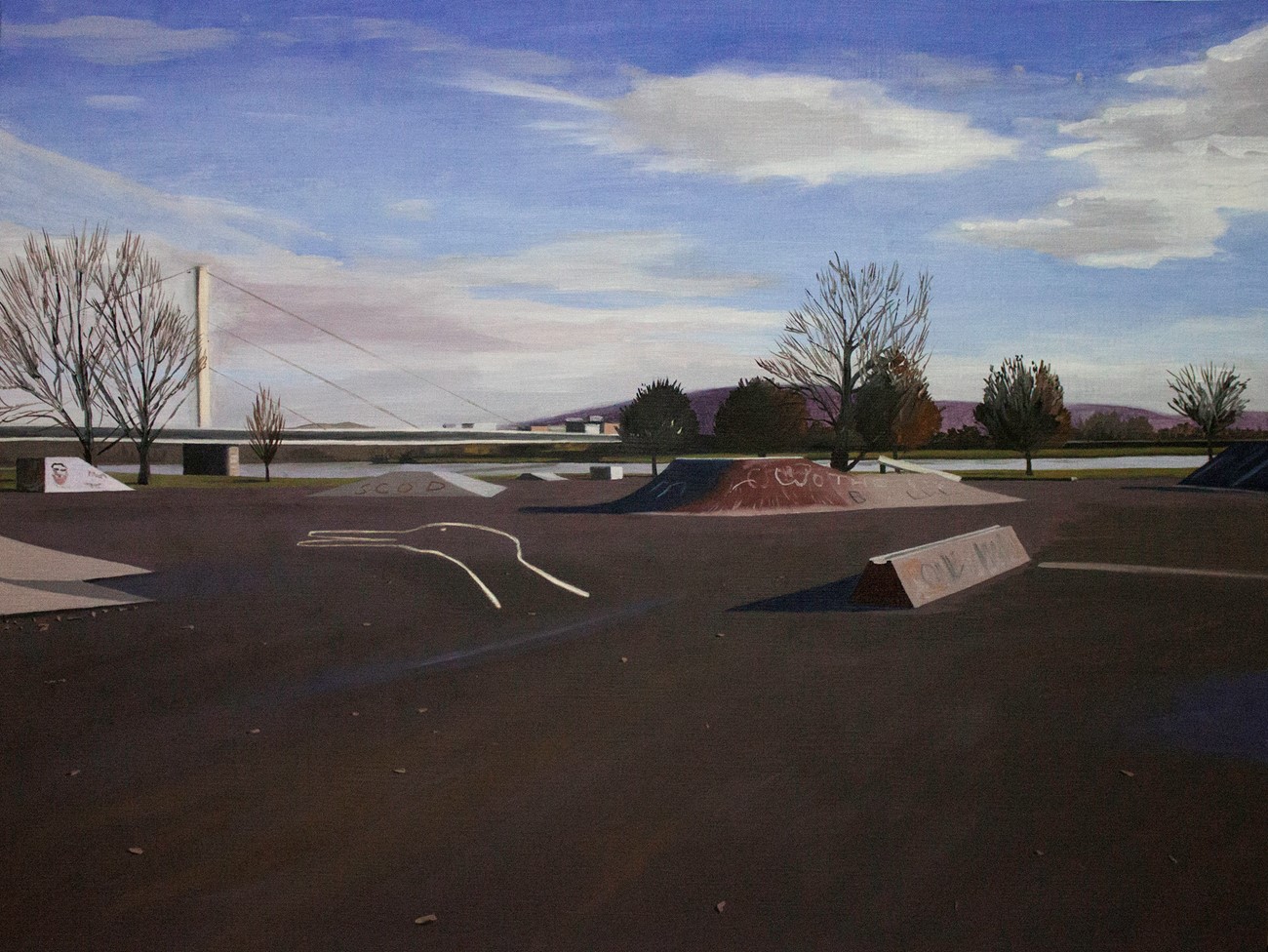 You're predominantly a painter but you also create animations as well - how does this tie in with your painting practice?

There's a strong connection between the two. The animations are really just moving paintings - they're made from painted pieces of paper that I scan into the computer to construct the textures and surfaces of the objects in the videos. Occasionally a scene in a painting has also become a scene in an animation, or vice versa.

The animations have been an ongoing part of my practice which I began during my MA in 2001. They sprang to life as I was under a lot of pressure to justify painting as a valid mode of practice on a postgrad course, more from fellow students than from the faculty, it just wasn't de rigueur at the time, and so it was a way to break a painting out of the conventions of it's static frame and make it screen based. A lot of my paintings at the time already had a film still quality, and contained lots of implied narrative, and were heavily based on computer game environments or films, so they were already hinting at an animated type of existence.

The animations that I make are very quiet and in some instances barely move - I think of them as slowly panning establishing shots for an obscure landscape film.

Tell us about the Penultimate Truth series of paintings and how you've used imagery from Google Earth and Google Maps. What does rendering the digital into a painting bring to the work?

It's a series of new landscape paintings that revisit various sites from the canon of art history. The paintings are based on imagery gathered from the mega-simulacras of Google Earth and Google Maps. The locations depicted are the rocky peak featured in Friedrich's Wanderer Above the Mist, rock formations of Cadaqués which feature in many Dali paintings, Crookhey Hall - the childhood home of Leonora Carrington which featured in her surrealist landscapes, Mont Sainte Victoire - which Cezanne painted many times, Storr Rock which was painted by Alfred Sisley, and St George's Island, which is the supposed location for Bocklin's Isle of the Dead.

I think the effect of the paintings is quite sad in a way - it lays bare the massive amount of remove that I had from the actual sites that the artists worked from, and in turn this gives me a feeling of the loss of genuine experience. However, it starts a process of thought about how mediated the older paintings were in their own ways, and how much meaning has been piled onto them with never ending close readings. Also there's a lot of intrinsic humour - they're awkward paintings, like a shoddy parody of the things they refer to. Making a painting that appears as the navigable interactive space of a virtual map and reducing it to the old technology of oil paint is a perverse activity, akin to a teenager making drawings of their favourite computer game.

The title of the project is from a book by Philip K Dick about a future society that is largely kept in the dark, literally and metaphorically, by a small powerful elitist government. Within the book various truths are revealed alongside the insanely detailed fiction which has been woven by the powers to keep most of the populace under control.

I was really pleased that this project had support from Arts Council Wales, and this allowed me to employ the painter Tom Down as a mentor for the duration of the work and to participate in some crits with me.

The exhibition formed part of the launch for Elysium's brand new gallery in Swansea. Their new space and accompanying art bar have to be seen to be believed. As is their custom, they've taken over a disused nightclub and transformed it. I think it's on the way to becoming one of the most important galleries in the UK. The door staff clicked 600 people at the opening night! 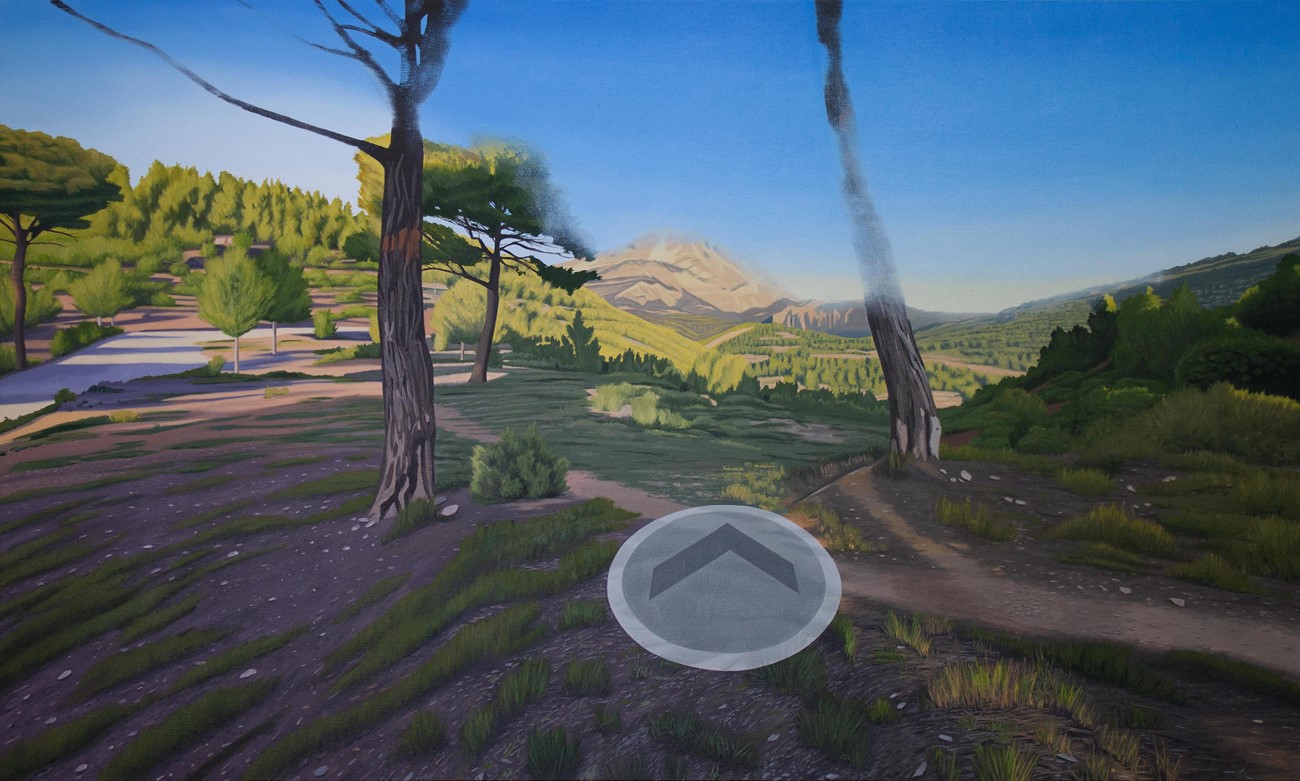 Ultimately I'd like the audience to take away the feeling that art is really really, really cool and one of the most valuable things we have, and I don't mean financially valuable. Also, I want people to experience some humour and I'd love it if my work conveyed to the audience an understanding of the staggering complexity that's involved in the value judgements we make about the things we look at, what meaning might be 'contained' in the stuff we see, how real these things are and how artificial they are likely to be, and the power that images have over us. If my work prompted someone to think more deeply about the highly artificial nature of almost everything we see as contemporary Western citizens, and the implications of that artificiality, I'd be really happy! For me really good art manifests our thoughts and feelings about things, and I hope that people can look at my work and get into the space of a painting and pick up on some of these things.

I really like Sandra Gamara's paintings at the moment - she currently has some on display at Tate Modern. Her first person views of other paintings with an accompanying pointing hand are brilliant - something straight from a gaming iconography. Pictures of galleries, people looking at paintings looking at paintings. They ask 'how deep can you go in the never ending procession the gaze?'

I have a painting about Michael Jackson's 'Bad' tour in the Jackson's Painting Prize coming up in May. Also I'm in a group exhibition called Rumblestrip at g39 in Cardiff which I'm really looking forwards to. Throughout the year I'll be curating a few exhibitions at RUG gallery and making some new works for Paper Gallery too, and I'm sure a few other things will happen in 2019. In 2020 I'm taking part in two exhibitions curated by Jonathan Powell at Elysium Gallery - 'Walking in Two Worlds' which will be part of the BEEP painting biennial, and a group painting exhibition of Welsh artists in Xi-An, China.