Artist of the Month
April 2018

Our Artist of the Month for April 2018 is Madi Acharya-Baskerville. We talk to her about her practice, the importance of materials and place and her Southern Asian heritage.

My practice is about constantly looking around in my environment for what has been lost or discarded. It is as if objects and materials that I find need me as much as I need them. I am also really concerned about our environment and what is going to happen to all this 'stuff' around us. I like to connect with different environments. When I first started making work with found objects I lived on the coast and would walk the coastal path collecting objects such as shoes, molten plastic, wood and metal. More recently I have been sourcing materials from other environments such as woodlands. Collecting textiles which have been in my family or vintage textiles from flea markets and exploring how memory of specific events can be associated with particular textiles is also a recent development.

I am fascinated by the materials and objects and the possibilities of their transformation, process of making work is more like play and the studio feels like a playground of possibilities where things can come together with relative ease or fall apart after much deliberation. I am interested in this 'falling apart' and its possibilities and how this can lead to surprising combinations, which may appear to be decorative or amusing on the surface but usually have more serious undertones. 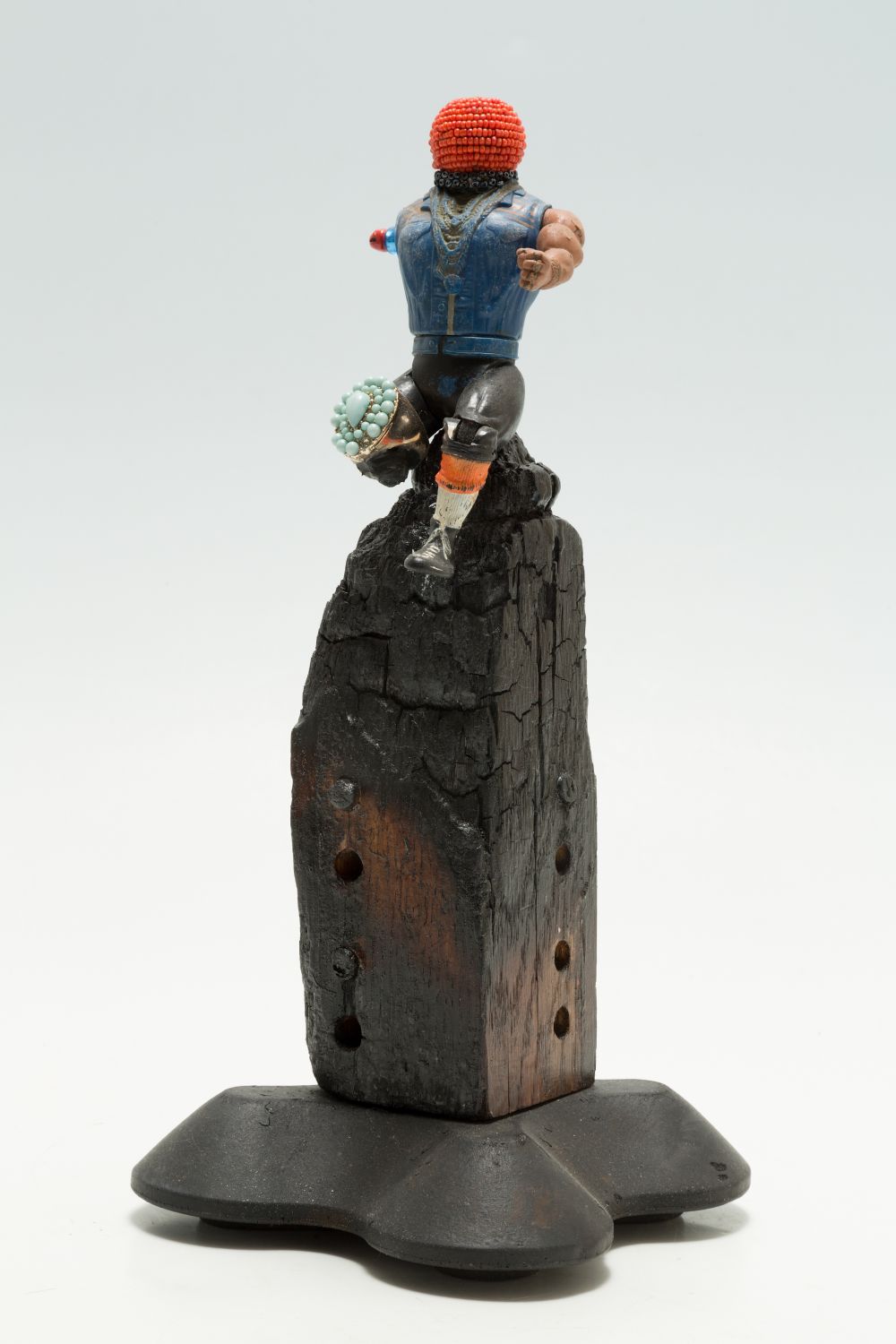 My practice ranges from painting, sculpture, installation and site-specific works and I see the materials and objects as my collaborators rather than me imposing a particular set of ideas on them.

Could you tell us more about Southern Asian culture and how this influences or informs your practice?

I was born in India and spent early part of my childhood there. While I lived in India I moved around from Bihar, to the Himalayas and the Punjab. I grew up speaking Hindi and Bengali as a child and could not speak very much English when I arrived in the UK. This presented me with a challenge but also an inspiration.

I continue to be influenced by images from childhood, of Indian rural life, tribal masks, ancient customs. I often use intricate beadwork and delicate textiles as a way of deliberately slowing down the process of making work. I am also drawn to text and poetry, and have used Bengali text which is not only visually beautiful but also a way of tapping into my cultural roots. The poetry of Indian Rabindranath Tagore (1861-1941) is an inspiration for my paintings such as 'Ordinary Girl'. You use a lot of found materials in your sculptural work and mention in your statement that you find branches in woodlands across the UK. Is this method of collecting materials an important aspect of your practice and is there a connection between the work and where the materials were sourced?

Yes, collecting materials from particular locations is important as I develop a connection with particular places for example Bentley Wood in Wiltshire. I have been exploring this idea of being rooted versus rootlessness through these branches. The idea of exile, being uprooted and wandering around from place to place being rootless, is rather like a branch is when it has fallen away from its tree and lost its connection. There is also something about trying to preserve the branches and arresting the process of decay, I spend time treating the wood, applying bandages to it to make it more robust so its quite nurturing too.

The branch I used for 'A walk in the park' came from a clearing in the wood and I was thinking about events that could take place there; walking in the wood, enjoying nature but also seeing it as a sinister and dark place where unfortunate things can happen. Madi Acharya-Baskerville, A walk in the park, 2016

I have also being returning to particular beaches, for example Chesil Beach on the Dorset coast. Collecting objects that have been in the sea creates a sense of coming from 'somewhere else' and hence connecting me with distant shores which in my mind may be close to my homeland.

I admire Cathie Pilkington’s work for its seemingly absurd and humorous look but exploring deeper, more uncomfortable issues, subjects that resonate with us but are kept out of sight. I share her interest in the 'Uncanny', the presence of the familiar within the unfamiliar. I recently went to a lecture given by her at The Royal Society of Medicine which was interesting on many levels and I felt particularly drawn to how she uses fabric filled with plaster to create the sense of a prosthetic limb.

Cornelia Parker’s work has been a source of inspiration to me since I began collecting objects, thinking about their origins and the narrative behind them. I particularly like the suspended works such as 'Cold Dark Matter', 'Exploded View' and 'Neither From Nor Towards', which create a sense of limbo, hovering in transition almost defying gravity.

I admire Hew Locke’s use of a variety of objects to create a densely layered effect in his vast low-relief structures composed of toys and bric-a-brac from local pound stores and market stalls. I like the wit and humour in his works and the double-edged nature of both i.e. 'deadly funny'. I can relate to this sense of playfulness coupled more serious issues.

I am doing a 3 person show with Hayley Harrison and Anne Parfitt called Object in Hartslane Gallery, London in April (19th - 29th) which is a part of a series of projects responding to empty spaces in London. This show will explore the relationship between discarded objects and abandoned buildings.

In July (13th July - 5th August) I am co-curating a show at Angus Hughes Gallery, London which follows on from the theme in the show at Hartslane and is entitled Objection and is more concerned with the transformative process engaged in creating works from found objects and materials.

In November (22nd - 25th) I am in a two-person show at no format Gallery with painter Matthew Gould entitled Dancing with the Corporeal which explores the physicality which is common to both our practices. Art writer Anna Mackay will be leading a discussion on this concept as part of an artist talk for this show.