Artist of the Month
October 2017

Our Artist of the Month for October 2017 is Robin Dowell. We talk to him about habits of walking, political awareness and making work in Cornwall.

My work could be described as sculpture/installation, though I consider photography to be an important part of my practice; as a means of recording and thinking, as well as, sometimes, resolution. In the last few years there has been a significant shift in my work, in the sense that my practice is increasingly concerned with political contexts. It is now hard to imagine making work which is disconnected from the significance of this time. Common concerns about power dynamics, reactionary populism and isolationism punctuate the work. That is not to say, however, that I am preoccupied solely by ‘now’; I have just written a proposal which discusses political tension in 1328…! 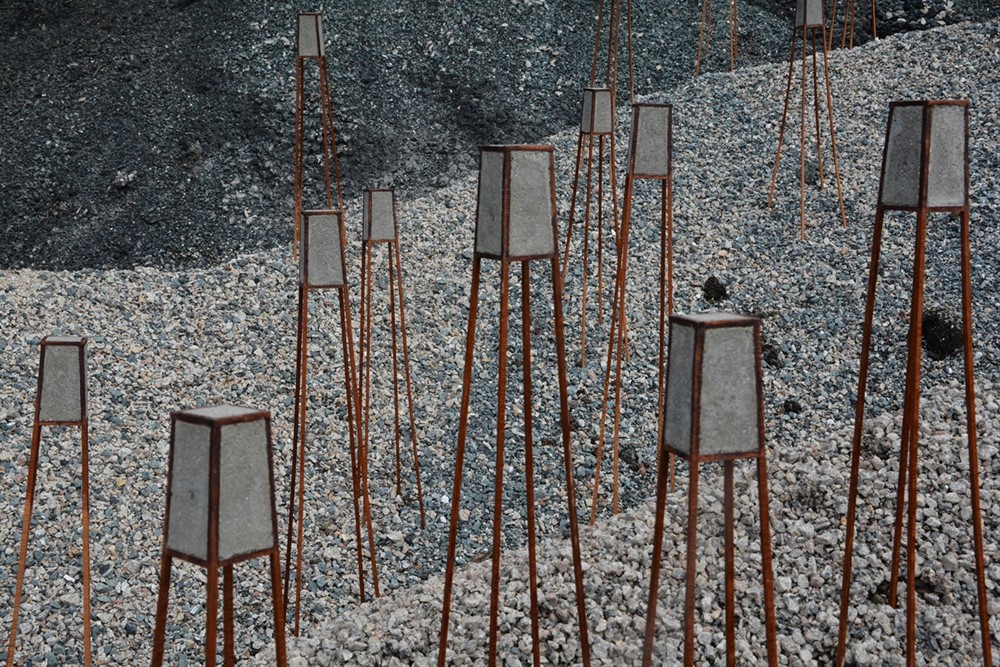 I am interested in the walking aspect in your work, or 'journeys on foot' as you put it. Are these journeys undertaken purposefully with the intention of making work – or for other reasons and art actions or thoughts emerge as a result of them? What is it about walking which suits your practice?

When I was eighteen I read Bruce Chatwin’s Songlines. In spite of the criticism it has attracted, for me, his interpretation of the significance of the walked journey resonated deeply. While there is undoubtedly a fascinating political dimension to walking (Rebecca Solnit writes brilliantly about this in Wanderlust), I am also drawn to the mindfulness instilled during the activity.

Walking is important to me for multiple reasons; I would divide walks into two categories, ritualistic or explorative. The former serve as meditations, perhaps a metronome to thoughts. When you walk the same route repeatedly over months or even years, a deep understanding of the minute landscape is cultivated; habitual step patterns, handholds, crossing points all have a rhythm which are conducive to reflective thought. The latter are more dynamic, hunt-like, where a landscape contributes materially or conceptually. I have a childlike fascination with difficult to access elements of the landscape; if it involves climbing or scrambling and allows access to infrequently visited and unmapped geographies, then I’m hooked! A big fan of Nick Papadimitriou, I believe that it is critical to develop deep understanding of landscapes, the physicality of a place, but also the history, significance and context of a place as we experience it.

Creatively, the impact of walking is varied. Most commonly a ‘ritual’ walk consolidates thoughts, clarifies next steps; bar its repetitiousness, the route is almost arbitrary. I think that on some level the journey on foot iterates my relationship to materials and their meaning. 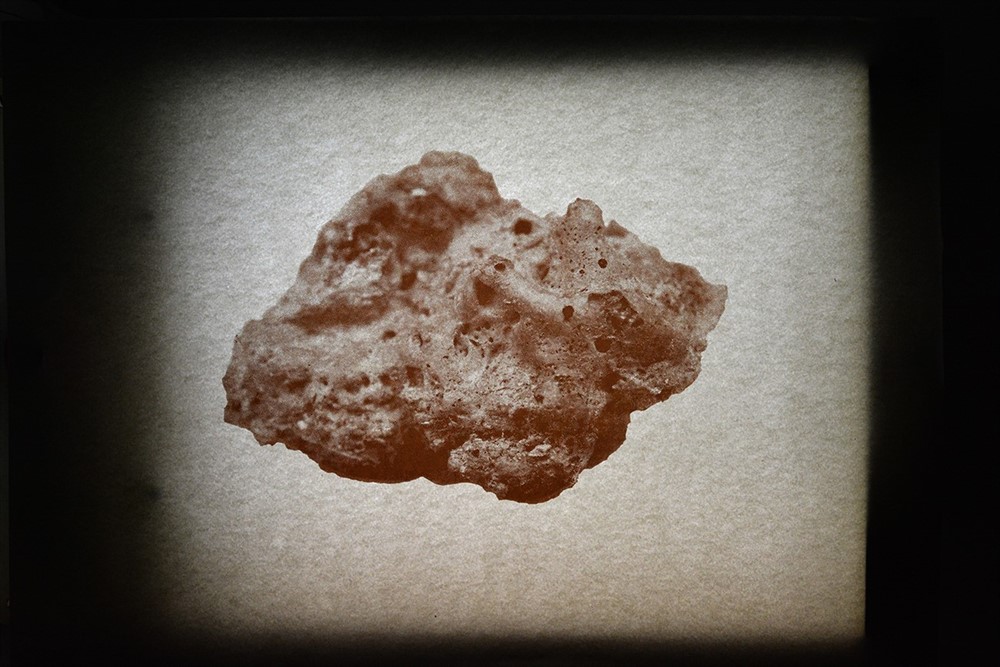 Your work centres around the landscape and the presence or history of industry. In some cases your work (I am thinking of Frontier and Crossing here) the works are situated in these landscapes, rather than gallery or studio settings. Tell us a bit about how these pieces worked in these settings – what were you interested in exploring with them?

Frontier actually has roots in a series of drawings I made in response to Calvino’s Invisible Cities. When I began developing them as cast concrete forms, political invective about mass human migration filled the news. For me they became inseparable from this crisis. I was reading Piers Brendon’s fascinating The Dark Valley: a Panorama of the 1930s at the time, and had visited Auschwitz the winter previously. The forms became at once watch-towers, borders, financial systems, Brutalist utopian dreams and archaic social structures. The decision to place Frontier in a rocky landscape of ambiguous scale came later. At the time I was doing a lot of walking in the Tywarnhayle mining area around Porthtowan in Cornwall, where I am based. The valley in which it sits is a rocky, barren one which still suffers from the toxicity of mine water run-off. It felt to me that this post-industrial landscape afforded a vision of a world to come, or that perhaps the ‘heritage’ of this mineral extraction was a metaphor for the way we relate to each other on a societal, and possibly personal, level.

Frontier has experienced other incarnations; at Inland Art Festival, and at a recent residency, Static Island, that I had at Back Lane West in Redruth. At BLW, the forms were placed in a ‘landscape’ of 7.5 billion specks of flour – a piece for every member of the human race.

Crossing is an ongoing project, in which a large (around 2.6m high) tower, coated in a reflective surface, is photographed at night in different locations. The tension between the timeless situation and the abruptness of the light emanating from the structure is an essential element of the work. I have always been fascinated by the invisible cartographic lines which bisect the landscape; there can be something shocking about their arbitrary placing. In context, these images suggest borders or boundaries. 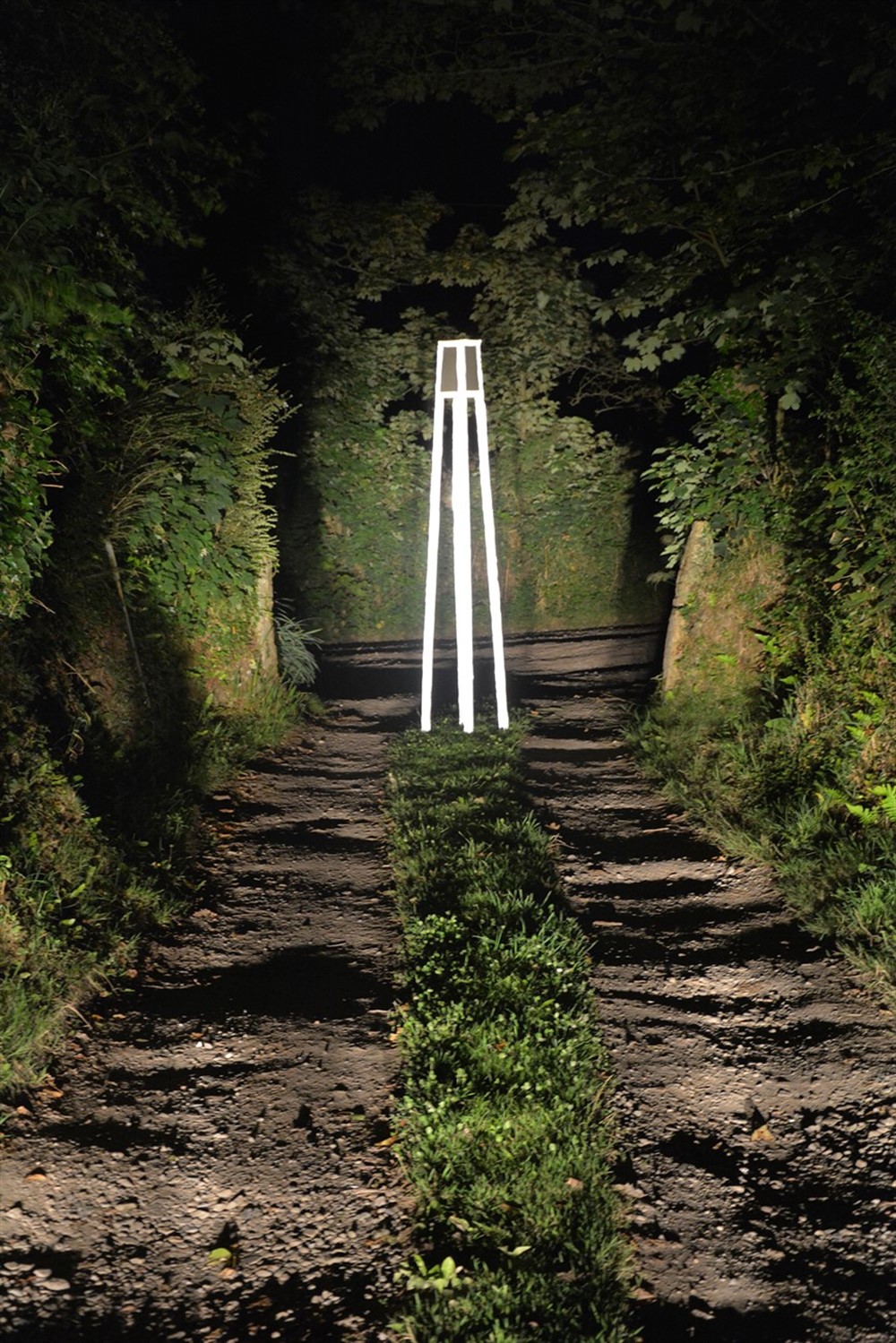 Tell us a bit about your experience of the art scene in Cornwall and the South West, what attracted you to make work there?

Like many who have moved to Cornwall, as I did eighteen years ago, I fell in love with the wildness and beauty of the far West of the county; wind-blasted moorland, secret sheltered white-sandy coves and turquoise seas. This tapering granite peninsula battles with the elements, and where shelter permits, the sub-tropical climate fosters exotic habitat infrequently seen elsewhere in Britain. A stunning place.

Cornwall undoubtedly draws a broad range of creatives. There are many involved in exciting, innovative projects, among whom I would include Field Notes, the organisers of Inland Art Festival. Personally, I have a lot of respect for Back Lane West directors Patrick and Jane Lowry who afford artists, locally and internationally, incredible support. CAST, in Helston, is incredible; Groundwork, their three year programme, includes an amazing range of lectures, performance, readings, workshops and film screenings. Further afield, events like Plymouth Art Weekender reflect the exciting developments in that city. Low Profile are organising Jamboree 2018, which looks like a great event for artists across the south west.

I have a lot of respect for the work of Katie Patterson. Her work Earth-Moon-Earth resonates particularly.  At the moment I can’t stop thinking about Toby Smith’s collaboration with Kevin Callaghan, Rare Earthenware. I admire the work of photographer Nik Strangelove; the integrity of his practice is ever-present. Adam Chodzko is another artist whose work I greatly admire.

It probably sounds like I’m taking the mickey when I say this (but I’m not), recently Cormac undertook extensive roadworks near Truro. Whenever I got caught up in the traffic jams (or audience, as I like to think of it) I was taken by the beauty of the material selection, the exquisite palette of pink sprayed markers against asphalt and aggregate, the composition of these elements and theatrics of this collective performance piece. Honest…! 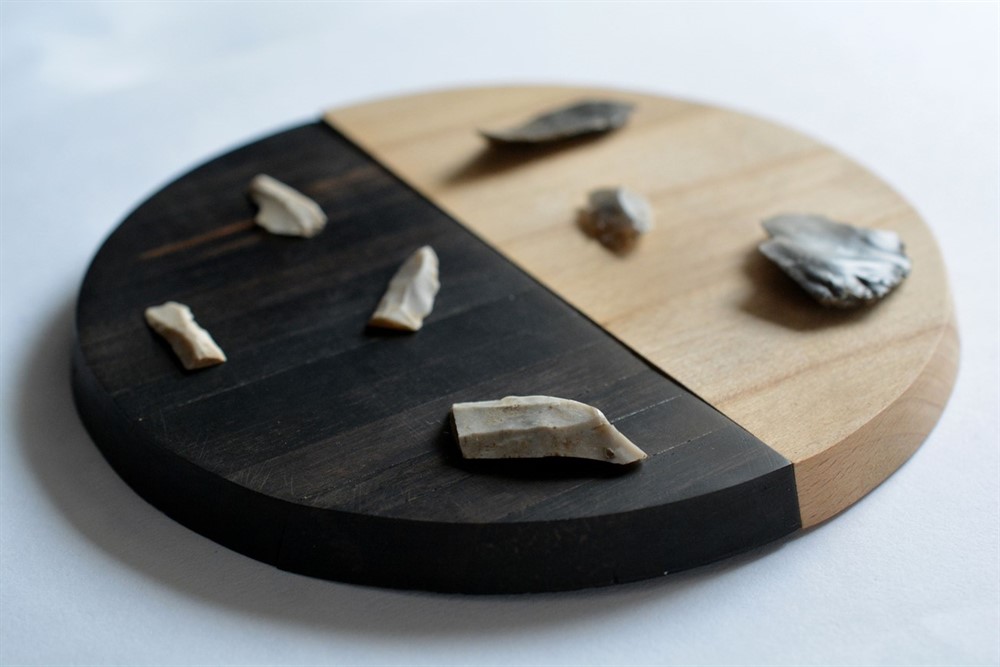 I am currently developing a series of fieldtrips with my collaborator and friend, artist and ecologist, James Fergusson. We studied in London together, fell out of touch for around twelve years, and then met by complete coincidence on a walk(!) in Cornwall. Our practices share common interests and the project is part of Groundwork’s exciting series of events for 2018. I work in education too, so autumn is traditionally a quieter period creatively. That said, I am currently building an internally-lit glasshouse-type structure from 1950s photographic plates collected by my grandfather, setting still to be established.